Their Bright Ascendancy continues with a slower volume that focuses on its queer women protagonists to the near-exclusion of everything else. 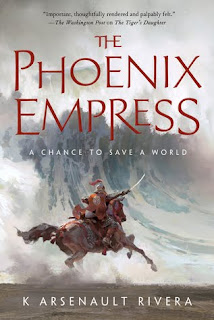 I've been looking forward to The Phoenix Empress, second in the "Their Bright Ascendancy" series by K. Arsenault Rivera, for a while: as a sequel to The Tiger's Daughter, a book that I very much enjoyed despite its flaws, I was intrigued to see where the author would take both the plot and the form of this queer romance-heavy fantasy trilogy. Structurally, The Tiger's Daughter is an odd book, told mostly in the form of a second-person letter from Qorin warrior Barsalai Shefali to her wife, Hokkaran O-Shizuka (better known by the time the letter is written as Empress Yui). Shefali effectively retells the story of her childhood with Shizuka, moving between the steppes on which the Qorin people live and the royal Hokkaran palaces, their cross-cultural friendship enabled by the close relationship their own mothers had at the time of their birth. Shefali and Shizuka fall in love in a society where same-sex relationships are more or less taboo, particularly in Hokkaran culture, and their battles include the fight for acceptance as well as some actual battles with a plague of black-blooded contagious zombies from north of Hokkaro. Spoilers for The Tiger's Daughter will follow, so if you're not caught up, and you want to try a slow-burning epic fantasy with a same-sex relationship between women at its heart, this is the book for you.

The Phoenix Empress pick up almost exactly where its predecessor leaves off, and while the "present" takes up more of the narrative in this volume, there's still a substantial story-within-a-story as Shizuka fills Shefali in on the events that led to her becoming empress, not to mention developing an alcohol addiction and a severe phobia of water. Shefali has returned from her own travels even more changed, following events in that have led to her being contaminated by black blood but not succumbing to the usual progress of the illness, and now expects to die on her next birthday in four months' time. A great deal of the book is therefore based on learning each others' secrets and renewing their relationship, as well as working out what the wider implications of Shefali's return are for the future of Hokkaro and the black- blood plague.

I suspect that the unusual structure of these novels is playing an important trope-subverting role as well as being a narrative choice. It allows Rivera to incorporate a long, traumatic separation into Shizuka and Shefali's story without turning the relationship itself into a tragedy, particularly during the ending of The Tiger's Daughter (Shefali's letter ends with the separation of the two lovers; the plot of the frame narrative, eight years later, with their being reunited). By averting a "bury your gays" moment, Rivera definitely wins my trust as a reader on one level, but it does also change my relationship to the tensions in the novel. Despite Shizuka's trauma and Shefali's impending doom, part of me is convinced from a meta-narrative sense that we are reading a story where the pair will triumph in the end, and all that matters is how. Unfortunately, there's not much in The Phoenix Empress that really invests me in that question, and I suspect this is largely due to the happy couple themselves.

Shizuka and Shefali are entirely consumed by each other, and while in The Tiger's Daughter that made for an interesting romance plot, by The Phoenix Empress, this feels more like family drama than the trials of star-crossed lovers. Their relationship blazes so bright that a lot of other story elements are obscured or left blank, with worldbuilding and characterisation outside of the pair often feeling sketchy and two-dimensional. It's worth noting that some concerns were raised about cultural appropriation in the Tiger's Daughter, and while I'm not personally sure how fair that claim is - this is a secondary world fantasy, after all - I don't think there is any change in The Phoenix Empress that will mitigate that concern, and there's a lack of overall depth to the world Shefali and Shizuka inhabit in this volume which is likely to frustrate readers invested in these aspects. Insofar as Hokkaro, Xian (a former territory of Hokkaro recently given independence) and Qorin are undergoing their own political transformations, this all seems to happen off-screen, or in the time between Shizuka's past and Shefali's present. There's also almost no queerness represented in The Phoenix Empress beyond the main pair: our elite battle wives find themselves in a world that's otherwise oppressively heteronormative at every level. In addition, some elements of Shefali and Shizuka themselves - like, say, the fact that they are both superpowered Gods - is taken bizarrely at face value by the narrative.

What frustrates me most is the treatment of Shizuka's past arc, which involves her precipitating a major un-natural disaster after a narrow escape from a river spirit whose agreement she breaks. On its own, the tragedy of this story doesn't prevent us from being sympathetic to Shizuka, who is horrified and traumatised by what has happened and was only trying to do her best to protect her people from the black-bloods. However, the narrative treats this as if the most important thing for Shizuka to gain is Shefali's forgiveness, and through that, her own peace of mind. I couldn't help but compare the way this element was treated to the atrocities which take place in R.F. Kuang's The Poppy War, where the first-person protagonist reacts to war crimes in a way that is personal but centres the crimes and the death themselves - a distinction which is even more important because Kuang is writing about fictionalised versions of real historical events. In The Phoenix Empress, the tragedy isn't really allowed to stand on its own: it's all about how Shizuka and Shefali's reconciliation might be affected by its aftermath.

At this stage, it feels uncomfortably like I have been railing at a book for not being what I wanted, rather than not being "good". I have to acknowledge that, while I love a queer romantic subplot, the slow burning soap opera at the heart of The Phoenix Empress was always going to be a hard sell for me. However, if that is a selling point for you, there is definitely an accomplished and unusual story here, and Their Bright Ascendancy is still a valuable addition to a still-too-small canon of wlw fantasy novels. There's an intriguing quest set up in the last chapters of The Phoenix Empress and while the jury's still out on whether I'll be along for the ride, I'm very glad that Shefali and Shizuka will be setting out on their final adventure together regardless.

Bonuses: +1 The world needs more books like this; +1 Pulls off an interesting story-within-a-story structure without diminishing my interest in either tale

Penalties: -1 Everything that isn't Shefali or Shizuka is washed out by the intensity of focus on the pair.