Adventures in Medieval Space and Time 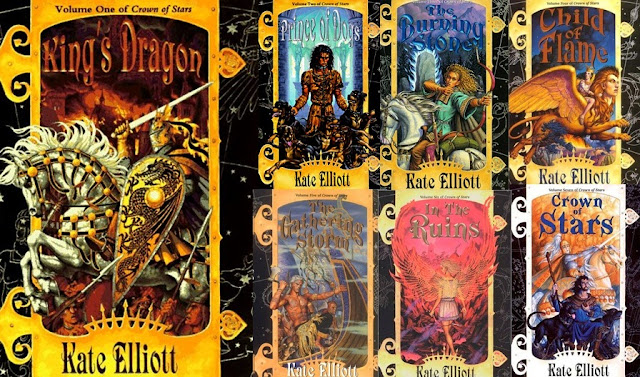 I started on Kate Elliott's seven book Crown of Stars series in summer last year, for a couple of reasons: I (partly) wanted to read more Kate Elliott, having only experienced her Spiritwalker trilogy so far and (mostly) was trying to increase my "score" on Lady Business' "60 essential reads" list from 2 years ago. This may not have been the best idea, because Elliott has lots of newer books that I'm equally, if not more, interested in (Court of Fives and Black Wolves are sitting on my Kindle and my physical TBR shelf respectively, judging my choices). For a while, getting through this septology of dense, expansive high fantasy felt like an impossible task - a reading feeling which is reflected in the flashes of writing experience we get in the preface notes, where a trilogy becomes five, and then six, and then, finally (and fittingly) seven. Unlike certain other fantasy series that have taken up more space in popular imagination, though, Crown of Stars does end, presenting a reader with a huge but ultimately achievable and satisfying experience to get there.

The series begins with King's Dragon, a volume which initially invests us in three storylines. Liathano, a young, highly educated woman living in relative seclusion with her father, has her life thrown into disarray when her father is murdered and a deeply unpleasant presbyter named Hugh takes an interest in his materials and in Liath herself. Alain, a boy whose adoptive family have sent him for a monastic life he doesn't want, is visited by the Lady of Battles and ends up instead at the court of Count Lavastine and his selectively loyal dogs immediately before an invasion from the north. And, in the court of King Henry, questions are being asked about the line of succession: Henry has three legitimate children from whom his heir ought to be come, but has always instead favoured his oldest, bastard son Sanglant, born to a mother who is quite literally not from this world. To make matters worse, Henry is also facing internal dissent from his sister and her rival faction for the throne at the same time as said northern invasion should be occupying his attentions.

On their own, the adventures of Liath, Alain and Sanglant could easily fill multiple volumes of high fantasy, with the Eika - alien, stonelike creatures whose invasion of the north involves widespread killing and slavery - as an antagonist group whose motives slowly become more complex (ideally to an extent that questions the problematic elements of having a racially-delineated antagonist group). We'd also expect some plot-relevant repeat appearances from the Aoi (read: fae-elven) people from whom Sanglant is part descended. And we do get all of this this, but it comes alongside so much more: religious heresies and rebellions; a near-unstoppable invasion of nomadic raiders from the east and questionable alliance building with the Queen in the south; discovery and rediscovery of ancient bloodlines through ancient cultish conspiracies; magical trips thousands of years back in time, into the realms of the outer spheres, and through territory deep underground; a cataclysmic natural disaster borne of an ancient magical mistake; spirit summoning; pyromancy; griffins and centaurs; unnaturally ageing children; a cast of minor characters which, in my copy of In the Ruins (book 6, the only one to contain a character list) spans 20 pages, and constant exclamations of "Ai! Lady!" which only stopped being annoying around Volume 5. Only the well-realised medieval-ish setting prevents there from being a kitchen sink thrown in there somewhere: there's literally every plot element you could want from an epic fantasy series somewhere in here, along with a few I'd be happy never to read about again (i.e. rape. Sigh.)


What makes the Crown of Stars series so interesting is that it incorporates all these elements while also being very consistent about the concept of distance, and the amount of time which this continent-spanning, world-changing quest would require in a setting with inconsistent magic and low technology. From the moment the characters start spinning off into different plots, there's a sense of overwhelming division between them, and regular detached references are made to the fact that years are passing within these books, although the narrative only focuses on plot relevant moments with very little in the way of "downtime" (I dread to think how many volumes this story would have taken if it included the static character banter of Stormlight Archives). These distances also make the limited capabilities of even the elite characters very clear: around the mid-point of the series, Henry makes the choice to travel to neighbouring Aosta in order to support a deposed queen and pursue marriage alliances, rather than addressing any of the other threats to his regnancy, and this choice literally cuts off his communication with his own land with enormous consequences. When magical sight comes into play, we have characters watching pivotal moments with no chance of influencing what is happening, and the powerlessness this creates even amongst the series' most powerful individuals is very well conveyed.

Committing to the realities of this distance, and the information gaps this creates, also means Crown of Stars presents quite a high difficulty setting for its readers when it comes to remembering the happenings of the series' characters. Unless someone has literally been there to witness an event, information can take entire books to reach them, and the shifting limited third person voice means that their mistaken assumptions are regularly presented as fact by the narrative. I find myself hoping some benevolent tech genius will fall in love with this series and create some kind of "character networking app" that breaks down, section by section, where everyone is and what they're doing, so if I ever reread this series I can consult an omniscient guide to remind me what's actually happening and what misinformation the characters are working from. Elliott makes other style choices that also compound the difficulty for readers with imperfect recall. Each book is divided into sections and then subdivided into (sometimes short) numbered chapters, but each section can contain multiple alternating points of view, and Elliott has a consistent habit of not name checking the character the narration has switched to until several paragraphs into the chapter. It's honestly just too much to keep straight at times, and the plot is complex enough that some help from the author or editor on these small elements (e.g. chapters named by POV, or character-specific glyphs in the chapter headers as in Stormlight Archives or Shattered Sands) would have greatly enhanced my comprehension without detracting from the text or style.

With a cast of 20 pages, there's inevitably going to be some characters you care about more than others. For me, it's Liath by quite a wide margin, with Alain in distant second for the first half of the series, while other characters are more or less compelling depending on their distance from Liath. Despite being thrown directly into the middle of world-changing political events, Liath keeps her interest and her personal motivations fixed on the cosmological quest of understanding. While Sanglant saves the Regnancy, Liath is in the business of saving the world, and when she does find herself forced to play the political game, she inevitably gets outplayed by everyone else. On the antagonist side, mothers play a huge, ambiguous role, both in the literal and, through religious elites, metaphorical sense (the church is female-led), and there's a lot of powerful, complex women whose interests align more or less with the heroes at any given point. Unfortunately, because of the challenges outlined above, most of the extended cast fell very much into "meh" territory for me: I just couldn't muster much interest in the fate of characters like Blessing, or Heribert, or Wolfhere, or anyone in the Eika plotline, despite the pivotal roles these secondary characters play in the emotions of the main cast, because I couldn't keep straight where they were supposed to be and what was happening to them at any given time.

If you can keep your head around all the character comings and goings, however, Crown of Stars is worth sticking with to the end. With political complications and plot developments piling up all the way through the sixth book and into Crown of Stars, the final volume, it's initially hard to see how this series could come to anything approaching a satisfying end, but by halfway through it becomes clear exactly what sort of story this is going to be: there's no chance of a huge, multilateral political settlement that would tie together all of the geopolitical threads in one easy bow, because that's not how geopolitics works, but there's a satisfying "beat" to most of these, including a development for the Regnancy of Wendar and Varre that I had wanted to see since King's Dragon. However, the sense of closure in the end of Crown of Stars really comes through the way the characters' journeys come to an end, and - in a neat twist I didn't even realise I wanted until it started happening - who among this enormous, scattered cast finds each other again. It's such a neat way of tapering things off, and feels very true to the series as a whole that, ultimately, satisfaction is found not in political victory but in coming back to those you love, perhaps with a better understanding of why that love is so important.

In a story that, as noted above, contains everything except the kitchen sink, it's an enormous storytelling feat to stick an ending that relies so much on the small things. If this huge, messy, tricky series is an example of Elliott's relatively early work, I'm extremely excited to move on to the more recent books and see what those worlds have in store. Crown of Stars is expansive, frustrating, and will test your ability to remember character names to its absolute limit, but it's well worth the experience in the end.