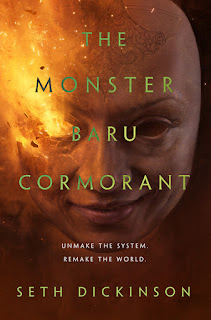 Her world was shattered by the Empire of Masks.
For the power to shatter the Masquerade,
She betrayed everyone she loved.

The traitor Baru Cormorant is now the cryptarch Agonist—a secret lord of the empire she's vowed to destroy.

Hunted by a mutinous admiral, haunted by the wound which has split her mind in two, Baru leads her dearest foes on an expedition for the secret of immortality. It's her chance to trigger a war that will consume the Masquerade.

But Baru's heart is broken, and she fears she can no longer tell justice from revenge...or her own desires from the will of the man who remade her.

Why We Want It: The Traitor Baru Cormorant was a bad ass novel of a woman trying to get her revenge on an empire from the inside, and the moral compromises she has to make to rise high enough to effect that change. Monster Baru is the sequel and I need this in my life. 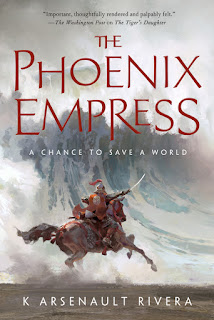 
Once they were the heirs to a prophecy that predicted two women would save an empire.

Now Shefali is dying—and her wife is unaware of the coming tragedy. Shizuka is too busy trying to reunite a fractured empire and right the wrongs of her ancestors.

As the Imperial Army gathers against a demonic invasion, Shizuka must do all she can with an empire on the brink of civil war.

Why We Want It:  I have not read The Tiger's Daughter but I've been inundated with the praise that novel has received. It has been enough to push that novel much farther up my reading queue and to get my attention firmly planted on its follow up, The Phoenix Empress. 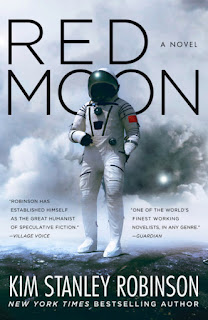 It is thirty years from now, and we have colonized the moon.

American Fred Fredericks is making his first trip, his purpose to install a communications system for China’s Lunar Science Foundation. But hours after his arrival he witnesses a murder and is forced into hiding.

It is also the first visit for celebrity travel reporter Ta Shu. He has contacts and influence, but he too will find that the moon can be a perilous place for any traveler.

Finally, there is Chan Qi. She is the daughter of the Minister of Finance, andwithout doubt a person of interest to those in power. She is on the moon for reasons of her own, but when she attempts to return to China, in secret, the events that unfold will change everything – on the moon, and on Earth.

Why We Want It: Would you believe the only Kim Stanley Robinson I've read is last year's Hugo finalist novel New York 2140? I've meant to read more, I've got at least two of his novels that I can think of on my bookshelf downstairs, but I'm overdue to read more. The title has obvious echoes of Robinson's classic Red Mars and the novel itself deals with the colonization of the Moon by China, which is a solid and plausible future. I mostly enjoyed New York 2140 and this should be another major novel from Kim Stanley Robinson. 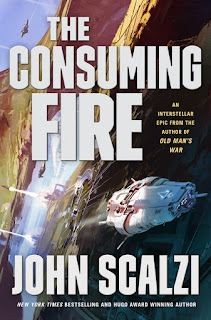 The Interdependency, humanity’s interstellar empire, is on the verge of collapse. The Flow, the extra-dimensional conduit that makes travel between the stars possible, is disappearing, leaving entire star systems stranded. When it goes, human civilization may go with it—unless desperate measures can be taken.

Emperox Grayland II, the leader of the Interdependency, is ready to take those measures to help ensure the survival of billions. But nothing is ever that easy. Arrayed before her are those who believe the collapse of the Flow is a myth—or at the very least, an opportunity that can allow them to ascend to power.

While Grayland prepares for disaster, others are preparing for a civil war, a war that will take place in the halls of power, the markets of business and the altars of worship as much as it will take place between spaceships and battlefields. The Emperox and her allies are smart and resourceful, but then so are her enemies. Nothing about this power struggle will be simple or easy... and all of humanity will be caught in its widening gyre.

Why We Want It: I delighted in The Collapsing Empire, to the point that I was reading in the car on the way to the airport so I could finish it before we left for a week's vacation (side note, I generally don't take hardcover books with me on trips, more often I'll bring a paperback to leave someplace for some random stranger to find a book and be delighted by it - the Scalzi is a keeper). The Collapsing Empire was fantastic, but it was also so very clearly the first part in a longer story. The Consuming Fire is that second part and I am so excited to read it. 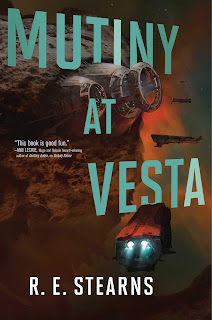 
Adda and Iridian have survived the murderous AI that tried to kill them in Barbary Station...but now they'll need all of their ingenuity to escape the evil megacorporation that wants to own them, in this second space adventure in the Shieldrunner Pirates trilogy.

Adda Karpe and Iridian Nassir have escaped the murderous AI that was trapping them on Barbary Station, and earned themselves a place on Captain Sloane’s fabled pirate crew. And now that they’ve arrived at Vesta, Sloane’s home base, they can finally start making a living stealing from well-off megacorporations.

Unfortunately, the political situation has deteriorated in Captain Sloane’s absence. Adda and Iridian find themselves trapped in a contract with Oxia Corp., one of the very megacorporations they'd hoped to prey on, forced to rob and intimidate targets they'd never have chosen on their own. If they're ever going to have the independent life together that they've always wanted, they'll have to free themselves from Oxia Corp. first. Meanwhile, the inhuman allies who followed Adda and Iridian from Barbary Station have plans of their own, which may be more dangerous than the humans involved could imagine. It will take not one but five heists, and every bit of ingenuity Adda and Iridian have to escape from Oxia and find the life they’ve always dreamed of…if they can survive.

Why We Want It: I'm a bit behind and haven't read Barbary Station yet, but I'm still sold on Navah Wolfe's description of that first book as "lesbian women of color space pirates versus a murderous AI". This is my reminder that I need to get on that because Mutiny at Vesta is coming up! 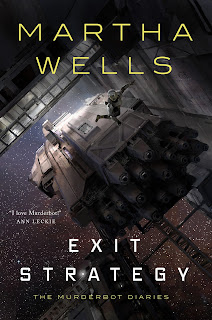 Murderbot wasn’t programmed to care. So, its decision to help the only human who ever showed it respect must be a system glitch, right?

Having traveled the width of the galaxy to unearth details of its own murderous transgressions, as well as those of the GrayCris Corporation, Murderbot is heading home to help Dr. Mensah—its former owner (protector? friend?)—submit evidence that could prevent GrayCris from destroying more colonists in its never-ending quest for profit.

But who’s going to believe a SecUnit gone rogue?

And what will become of it when it’s caught?

Why We Want It: What? You don't know about Murderbot? The first novella, All Systems Red, only won the Hugo, Nebula, and Locus Award for Best Novella. The next two are just as delightful as the first. Exit Strategy is the fourth and final Murderbot novella, though a full length novel was recently announced.