Welcome to the fifth of a six part series of essays focusing on Katherine Kurtz's Deryni novels (you may find the first, second, third, and fourth parts here). As I am physically incapable of actually reviewing these novels with any semblance of objectivity because they've imprinted themselves deep into my heart, what I am going to do instead is write about the aspects of each of the "Camber Era" novels which have stuck with me throughout the years and which I find intriguing today. Shall we continue? 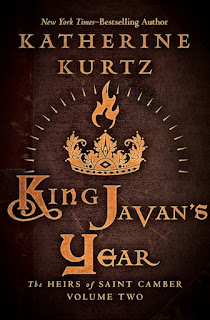 It has been more than a full year since we last checked in with my re-read of the Deryni novels from Katherine Kurtz. It hasn't been that unusual to take a few months in between posts in this series, but a few months turned into the birth of my daughter Coraline, and I think we all know how that goes. Best laid plans and all.

So here we are with King Javan's Year. Many of the Deryni novels have imprinted on my heart, but perhaps none moreso than King Javan's Year. This was my first Deryni novel, randomly picked up from the Rush City Public Library so many years ago. I believe it had not been out long was still in hardcover, so we're talking a good twenty five years. It was my excitement about reading this novel that led the librarian to sell me on the cheap her copies of the three Camber novels. I've been hooked ever since, as you've seen from the previous four entries into this series.

I've also been slightly dreading getting here. The title says a lot. King Javan's Year. It sounds ominous and if this isn't your first time reading Katherine Kurtz, you'll also have a very good (and correct) feeling that it isn't a good year. Also, if you've been reading any of the Deryni novels via a print copy, you may have noticed and paid attention to the genealogies at the back of each book. The Haldane genealogy flat out tells you what year Javan was crowned king, and what year he died. King Javan's Year, indeed. I'm sorry if I spoiled anything.

It's been three years since The Harrowing of Gwynedd and, as I mentioned then, everything is awful. King Alroy, always sickly, has been less than a puppet on the throne. First ruled by a regency council, and later upon reaching his majority still ruled by a regency council who has drugged him into compliance, is dying. Javan has spent the last three years as a lay brother with the Arx Custodes Fidei, the rabidly anti-Deryni militant religious order which sprang up damn near fully formed in the wake of the Michaeline order being declared outlaw. For reasons, this was Javan's best option for survival as a superfluous heir to the throne who didn't want to also spend his years drugged or to just flat out be murdered by the Council. It kept Javan out of site and served as a rigorous intellectual training ground, which will serve him well during his year as king (as is pointed out by numerous characters throughout the novel).

The Statues of Ramos are still and well in effect (remember those from Camber the Heretic?). As a quick summary: "Deryni were officially prohibited from holding any office, from teaching, or from endeavoring to seek out any religious vocation, especially the priesthood. Ownership of property was being increasingly restricted. In addition, Deryni were forbidden to use their powers in any manner whatsoever, under pain of death." Yeah, everything is awful.

So - Alroy is dying (and soon to be dead, check the title of the book). Javan relinquishes his temporary vows to the much hated Custodes Fidei and ascends the throne. He recognizes he needs to be careful. Even though is old enough to avoid a regency council, he sees the entrenched power structure of men who have long held all of the institutional power of Gwynedd during Alroy's reign and even parts of Cinhil's. If Javan pushes too hard, tries to enact too many changes too quickly, he knows he can end up in civil war or just straight up dead. 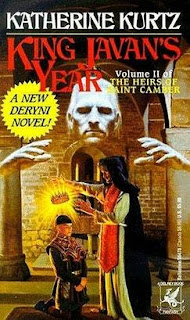 But this is where Javan is such a great character. It's why he resonated so strongly with my back in the early to mid 1990's - he's a teenager thrust into power due to the death of his brother and spends the entirety of the novel trying to do good, to be a good and just king, to overturn the evil enacted by the regents, to bring balance back to the force (what?). He is a teenager, but because the age of majority is so young in Gwynedd (14, I believe), he is a man with the responsibilities of a man. To be honest, between Javan and his younger brother Rhys Michael (much more on him later), I half expected someone to petulantly shout "I'm a grown ass man" with the squeak of puberty only just hit. That's an unrelated point, though.

The point is that Javan hit all of my buttons when I was also a teenager, and the novel holds up very well today.

There are some things that I didn't quite think about the first half dozen times I read this book as a teenager, though.


"It all scares me, too. I've gotten much stronger since then. Alroy, I have powers almost like a Deryni. If I'm careful, I can control some humans." He hazarded a quick grin. "I used to do it to Charlan all the time, once I found out how. It's dangerous, though, if anyone found out"

One of the aspects of Deryni magic that I've thought about as I've worked my way back through the series is the ethics of that magic. Time and time again we see deryni using their powers to control the minds of humans, to make them do things they might not have otherwise done, to make them forget what just happened, or to falsely remember events the deryni would rather have the human think happened.

When it's the "bad guys" doing this, it's a big deal. It's evil and the "good guys" need to make sure their people are protected and the realm is protected against this incursion. But when it's the good guys...


Guiscard smiled and shook his head. "You're worried about interfering with his free will, but if his will doesn't turn out to the same as yours, you're prepared to interfere even more with his free will." Javan looked up sharply. "That is what you're proposing, you know."

When it's the good guys, it is often hand waved away because the cause is noble and just. The above passage is one of the first that truly actively called out the questionable ethics of the situation. Actually, I would argue the ethics aren't even questionable, they're reprehensible and they are cooked into the behaviors and culture of the powerful deryni for decades. Hell, re-read what I wrote about Saint Camber for some of the more salient points of how Camber himself (the most legendary and sainted of deryni) deployed his powers against humans and against his human colleagues. The deryni purges and persecutions and the Statues of Ramos were wrong and evil, but the fear (though perhaps not the hatred) is understandable. How do you know when your mind has been violated and messed with? How can you trust? Javan's former squire and now knight Charlan trusts because he believes in Javan and his cause - but can he even know if that trust is legitimate?

I understand this may be one of the few ways our heroes are able to stay alive (and / or remain in power against enemies who would see them and their families dead - because let's not forget the torture and execution of full familes for no better reason than being deryni), but it is still a violation and it is still terrible. I know this is something I keep coming back to, but this time around it keeps jumping out at me every time it happens.

Let's be quite honest about just how twisted and evil most of Javan's council is, though. While I am very troubled by the use of deryni magic by the king and by many powerful deryni, this is a confederation of men participating in and institutionally supporting religiously approved torture and with a requirement that their priests violate the seal of the confessional. The council has imprisoned families to compel the magical support of their now "tame" deryni who are working under strict and abusive conditions.

Oh, and if that's not all (and it never is), that council so longing for a return to power puts into a motion a plan to overthrow Javan and place his more pliable younger brother on the throne. Rhys Michael is fake abducted and then rescued by a member of the council so that he could be nursed to health by Michaela Drummond and, while young hormones rage, get a child on her when they marry in secret - thus making both Javan and Rhys Michael completely superfluous. Once this goes down, the end is near for Javan as his council, those former regents, make their moves to betray him and in the process, unknowingly take down yet more deryni (a subject best left for a separate essay)

For as many times as I have read this novel, Javan's death in battle continues to move me almost to tears. It's the loss of a character I came to root for, to care deeply for, to want to read how he would reform Gwynedd and set so many things to right. It's the loss for the promise and possibility of a better future.

That final loss is similar to the loss I felt in The Harrowing of Gwynedd when Evaine died because it meant a closing of the door of scholarly research and discovery in the magical heritage of the deryni, of Orin and Jodotha and the Airsid. I wrote about that at the end of my Harrowing of Gwynedd essay, so I don't need to recap it here. It's just that the loss of Javan is the loss of possibility and, in some cases, the loss of a dream. It comes through on the page.


Next up, which will probably be at least six months from now, is the final book in my Deryni re-read: The Bastard Prince. If memory serves, it is my least favorite and least read of the six Camber-era novels. We'll see how it holds up for me and what I may have to say about it when I do get to read it later this year. Thanks for reading and we'll see you on the other side of the veil!