The Million is an intriguing SF novella buried within the interstices of Karl Schroeder's Lockstep-verse. 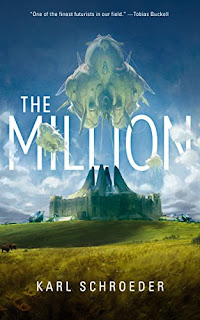 In the future, there are only a Million people on Earth, 359 months out of 360. In those 359 months, the Million are the lords of the Earth, but more akin to the stewards of the Earth, keeping it in good order for the 360th month of the thirty year stretch, when ten billion sleeping individuals, who have been lockstepping into the future wake up and take their due, enjoying all the Earth has to offer for a glorious month before going back to sleep for another 30 years. The Locksteppers can be thought of much like locusts in this regard. The Million are under strong treaty bound rules and strictures until then, including watching for visitors--people who escape the lockstep early, people who come onto Earth from off world, and people who were born illegally, upsetting the law that the there must not be more than the allocated number on Earth.

Gavin Penn-of-Chafee is this last, a unsanctioned son of his father. When an attack to overthrow and kill his father gets a black sheep family friend killed, Gavin has the chance to step into his life and his plans, Gavin, with the blackmaining approval of Neal’s father, becomes Neal Makhav and follows Neal’s plan to join the auditors, the overarching body that enforces the rule on the Million. As a mole inside the auditors, a man who should not exist, Gavin has to navigate the world of the auditors, his stolen identity, and the mystery of who really was behind the attack that killed his father. For, you see, his violent brother, the “true” son., has been framed for his father’s death. Welcome to the world of The Million, by Karl Schroeder.

By putting Gavin/Neal into a compromised position right from the start, and learning to be an auditor, the author neatly frames Gavin’s plight and position within the Million, and gives us an inside look at the society that exists for the 359 months out of 360 that the rest of humanity on Earth sleeps through.

The novella is also the story of Elana Devries. Like her sister Katherine, she is part of one of the most powerful families in the Million, the Hundred. Unlike her sister, she is not a Queen bee of social circles, no heavyweight of manners, parties, and soft power. She’d rather be fencing, or, even better, become an auditor herself and use her intelligence and cleverness. It’s natural that she spots something unusual about Gavin/Neal, and so becomes a strong second character in the novella. If anything, I’d have liked to see even more of her in the novella, and learned more about her deep plans.

The novella answers questions I had ever since reading his novel Lockstep: What is a society that has to co-exist with the Locksteps really work and look like, from their inside? The Million provides an answer of the extreme end, at a Lockstep at maximum time dilation. The tangled relationship between the Lockstep and The Million is an interesting one, and makes a counterpoint to the societies we glimpse from Lockstep points of view in the prior titular novel. I enjoyed the exploration of the themes and ideas that Schroeder presents here. The Million (and especially The Hundred) are an elite of the elite, having wealth and power and plenty that even the most powerful man on Earth today could envy. It’s not quite a post-scarcity society, but it is interesting to depict a society where these people wield a lot of power...and yet they themselves are shackled to the auditors, and those sleeping in the Lockstep.

The Million being set in the frame of Lockstep the novel, though, has disadvantages to readers who have not read the full volume. While this novella makes efforts to make the background as new-reader friendly as possible, I think the dense idea of the lockstep and how it works, and the implications of the technology and those who use it aren’t quite captured within the pages. The lean, dense novella and its focus on Neal and building the world that exists in the Million means that the Lockstep gets a bit of short shrift, which is a weakness given how much and how crucial they are to the support of the entire enterprise of the Earth as it is constituted.

One additional thing that bothered me was the lack of an off-ramp. I prefer starts of series to have a complete, full story that readers who do not choose to continue onto the world can find a good ending that they can take away with and move on to other volumes. The Million’s end point feels more like the midpoint of a longer work, with a lack of resolution. While I’ve been previously invested in this universe and was invested in the characters and story to continue on into the world the author creates, I think a somewhat sharper ending would have been better for readers who want a more self contained story.

That all said, I’ve been fascinated by the possibilities of Schroeder’s Lockstep verse since the initial volume came out, and I was delighted he has decided to explore it again. I would read more of Neal and Elena’s stories in future volumes.

Bonuses: +1 for intriguing characters. +1 for an excellent return to the Lockstep verse

Penalties: -1 for not telling a complete story., no good off-ramp out of the story in this volume. -1 previously reading Lockstep is really needed to fully enjoy this story.