Welcome to the second of a six part series of essays focusing on Katherine Kurtz's Deryni novels (you may find the first part here). As I am physically incapable of actually reviewing these novels with any semblance of objectivity because they've imprinted themselves deep into my heart, what I am going to do instead is write about the aspects of each of the "Camber Era" novels which have stuck with me throughout the years and which I find intriguing today. Shall we continue? 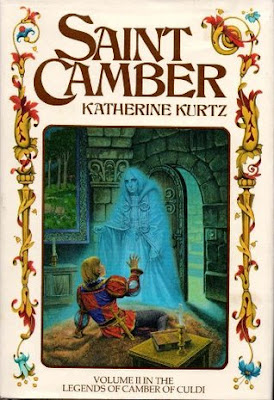 Let's begin by talking about magic and ethics. We briefly touched on the use of magic when we talked about Camber of Culdi, but the deeper I read into Saint Camber, the more I began to notice something that I never picked up on before.

"You make it sound, well, ominous," Guaire murmured, "as if there were something sinister about your Deryni powers."


The perspective we have in Kurtz's Deryni novels is a very sympathetic view of the Deryni. While there are bad actors like Imre and Ariella and Charissa, we are given a contrasting view with Morgan and Camber and Evaine and Joram and Rhys Thurin and any number of others. The Deryni are men and women who happen to have magical powers and who, mostly, just want to live their lives much as anyone else. Even though they are physically no different than anyone else, their magic sets them apart as a separate race.

The reader is sympathetic to the persecuted Deryni and for good reason, but what I noticed on this re-read that I never picked up on before is that our "heroes", the intensely sympathetic protagonists of Saint Camber engage in some seriously questionable actions.


In addition to the obvious ties of Michaeline brotherhood and obedience to a bishop's higher rank, Crevan would be bound by more invisible links of Deryni crafting. Camber made sure of that during his last interview with Crevan, after informing him of his intention to name Crevan as his successor.

His touch was subtle but irresistable; and Crevan left none the wiser. - pg 189


Camber hand picked his successor as Vicar General of the Michaeline Order, but invaded the man's mind so that he would be much more amenable to obeying Camber's directives and preferences.

Given that Crevan was never asked, let alone gave permission, there is no conceivable way to read this as anything over that a complete violation of Crevan. This is wrong and it is done by one of "the good guys", by one of the paragons of the Deryni race. It is done by one, who by the end of this novel, is canonized as a Saint.

Despite the general goodness of Camber what he does here, along with other instances throughout the series of the "good" Deryni entering people's minds to "protect" either the individual or themselves, is so very questionable and is one of the legitimate concerns humans have about the Deryni. How can the Deryni be trusted when those with the power use it against unwitting humans? This is not to say that I think the Deryni are monsters who should be eliminated, but we are seeing instances of the more positive representations of the Deryni using their powers in remarkably unethical ways.

Camber is rightfully concerned that since the coup to restore the throne of Gwynedd to the Haldanes that a backlash against the Deryni race is building and so much of what he does is in support of lessening that backlash, because even he does not believe it is possible to eliminate it all together.

Perhaps a third of the way through the novel, Alister Cullen is killed in battle with Ariella (thus mostly concluding a primary storyline from the previous novel). Cullen was the Vicar General of the Michaeline order of warrior priests (for lack of a quicker description), but more importantly, Cullen was a Deryni and perhaps the only friend and confident that King Cinhil had. Cinhil has been unable to truly trust Camber and Evaine and the others because these men and women with magic tore him away from the church he so desperately loved and thrust a crown on him.

So because Camber felt the near inevitable turning on the Deryni race and with Cullen slain, Camber used magic to first lay Cullen's soul to rest (it had been trapped by a final counterstroke by Ariella) and then changed his body to that of Cullen's and Cullen's to Camber's - so that, to all appearances, it was Camber who died in battle with Ariella and Cullen who lived.

The rest of Camber's life is a deception, but he felt it was necessary to become Alister Cullen if it meant that the backlash against the Deryni people could be lessened.  There were some deceptions that Camber was not willing to do, which gets back to one of the facets of Camber of Culdi which I most appreciated, which is the honest and true faith in God that these men and women have.

Alister Cullen had been tapped to be the next bishop of Grecotha, but Camber himself had never proceeded past being a deacon before being recalled back home when his brothers had died. Camber was not willing to dishonor the church, God, or the role of being a bishop by celebrating mass as a sham. Camber had never been ordained as a priest, and this is something he took seriously. Camber shared his secret with his old friend, the Archbishop, and was ordained prior to celebrating mass as a bishop.

Would they be faithful and constant in proclaiming the Word of God? Would they sustain and protect the people of God and guide them in the ways of salvation?

Would they show compassion to the poor and to strangers and to all who were in need? Would they seek out the sheep who had strayed, and gather them back into the fold?

Would they love with the charity of a father and a brother all those whom God placed in their care, even at the cost of their own mortal lives?


I want to highlight this passage as it gets to the heart of what it means to believe in the Christian god (which is pretty much what this world worships, even though it is not a one to one with the church and our world) - because it puts a spotlight on what the priests and bishops and archbishops are supposed to be and how they are supposed to act and lead. This is important, because unfortunately as the series progresses, we'll see just as many priests who won't follow those commands, even to the highest offices of the church. It is heartbreaking.

But where this series will show us dishonorable and immoral priests, it has not yet. What Kurtz has shown is how happy Joram is that his father is now his brother in the priesthood and is now a Father to more than just his own family. He has a quiet pride in his father because now they share something that few can understand, and they each have a sincere vocation.

There are a handful of smaller points which I would like to quickly address.

*While it is in the Chronicles of the Deryni trilogy that we are introduced to the Camberian Council, it is a very shadowy organization in Kelson's era. There we get the sense of the weight of history and authority and infighting, but it is in Saint Camber that we first see the glimmers of the Camberian Council, though it isn't known as such when Camber first mentions the idea. In the fear of a violent backlash against the Deryni, to the point that more than just the Michaelines would need to go into hiding as they did in the year leading up to reclaiming the throne of Gwynedd from the Festils, and for potentially more than just a year. The council is to be set up "to prevent flagrant abuses and to discipline those we can't prevent" and it will be "Deryni sitting in judgment of Deryni" (pg 248).

*Saint Camber contains the first mention of "The Protocols of Orin".

*Camber begins to delve into the origins of the Deryni religious orders in Saint Camber. While I recognize this is background, it is one of those things I am deeply fascinated by the various schisms of the past and how it shaped the orders of the "present". Camber also discovers a consecrated altar from one of those earlier orders, an altar built like ward cubes, but in a configuration even Camber has never seen before. It is noted how much magical knowledge has been lost in the time between Camber's era and Kelson's, but this touches on how much knowledge is lost even in Camber's day - knowledge that might just be rediscovered in the scrolls Camber found which are from Orin's day (hundreds of years prior) and yet earlier. Between Camber and Evaine, there is a great opportunity to translate those scrolls and rediscover so much that was lost. This assumes, of course, they ever get the time. Remember, I know how this ends.

*Late in the novel - and this has been gradually building since the deception of "Camber's" death - a religious community is building around the idea that Camber should be canonized: The Servants of Saint Camber. This is because of the "miracles" Camber caused with visions and magic, one to convince a distressed servant to support "Alister Cullen", one where Camber let his control slip when he was being healed by Rhys Thurin and assimilating the memories of the real Alister Cullen. Of course, the title of the book *is* Saint Camber and we remember the "he had not yet earned the title of Saint" line from the prologue to Camber of Culdi, so it isn't like this is a surprise. But, The Servants of Saint Camber is notable. Also notable is how much I apparently enjoy ecclesiastical politics with the convocation and defense of why Camber should (or should not) be canonized.

I will leave with this, because it is continually rending that Cinhil is so torn up inside of being not quite forced to give up his true vocation.

"Ego te absolvo, Cinhil," the voice whispered. He felt a light touch on his bowed head. "Be welcome at the Lord's table," Cullen continued in a more normal tone. "Will you share this Eucharistic Feast with us on the morn of battle?"

Cinhil opened his eyes, but he count not bear to raise his eyes higher than Cullen's knees.