Charming on the surface but with dark moral undertones, Spinning Silver is a technically accomplished but unsettling read. 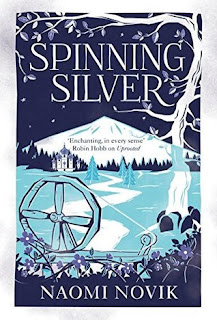 Spinning Silver is the latest offering from the author of the Temeraire series and the Nebula Award-winning Uprooted, based on a story which started life as a novelette in Navah Wolfe and Dominik Parisien's Starlit Wood anthology. Alas, I haven't read that anthology yet, so I can't compare this to its previous incarnation, though I certainly didn't notice any obvious seams; Spinning Silver reads like it was always meant to be a novel. Like Uprooted, the book takes a fairytale recognisable to Western European traditions (Rumplestiltskin), but weaves a more complex mythology and world around it based on Eastern European traditions. Though Spinning Silver is not set in the same world as its predecessor, there's some commonality between the two settings, particularly the role of the forest as a threatening presence in the protagonists' lives; friendships and support networks between women are also foregrounded in both stories.

The protagonist of Spinning Silver is Miryem, daughter of a moneylender whose family are the only Jews in a small, poor town. Miryem's father has made a name for himself by being generous to a fault, rarely collecting what is owed, and sinking the family into poverty as the community happily takes advantage of him. Miryam's only moments of comfort come through visits to her mother's wealthier family, and when her mother becomes ill, she feels she has no choice but to take over the job her father has done so poorly. To the horror of her parents and the approval of her grandfather, her foray into moneylending quickly becomes successful and Miryem is soon able to take pride in her ability to turn silver into gold. There are two serious dangers to this ability, however: first, her success quickly draws the attention of the Staryk, the dangerous spirits of the winter forests, who are known to kill humans that hunt their animals or travel on their roads. Second, her business sense quickly plays into the current of anti-Semitism in Miryem's town, creating an increasingly hostile environment for her family at the very time when they might need support from the community. It's the first threat that kickstarts the story, as Miryem is pushed into an unwinnable bargain with the Lord of the Staryk and finds herself caught up in the politics of both fairy and human courts, with the fate of both lands at stake.

Miryem starts off as the only narrator in Spinning Silver but her voice is soon joined by that of two other young women. The first is Wanda, eldest daughter of a widowed, alcoholic farmer who is indentured by Miryem to pay off her father's debt. From the perspective of Miryem's narrative, this is an early turning point signalling the character's willingness to inflict harsh punishments on for the sake of her profession. However, we immediately discover that from Wanda's perspective, this represents a shot at freedom from her father's house, and his desire to marry her off. The third major perspective is that of Irina, the daughter of the local human lord, overlooked since her own mother died and her stepmother started running the household. After being indirectly affected by one of Miryem's schemes to avoid the Staryk, Irina catches the attention of the Tsar, only to find herself in a highly unsafe, supernaturally charged situation of her own. These three perspectives are supplemented by occasional narration from secondary characters, including Irina's nurse and Wanda's younger brother (who unfortunately narrates in Stereotypical Autistic Voice).

The interweaving of characters' stories and lives in Spinning Silver is masterful, with multiple subplots touching and intertwining as Miryem, Wanda and Irina try to find their way out of the constraints of the men and monsters in control of their lives. The common thread here is that of bargaining and debt, and of the cultural expectations surrounding it. Novik takes this value system very seriously throughout: there's no sudden but predictable subversion where "it turns out the only real value is love", or other such easy options here. This doesn't mean friendship and kindness don't play an important role in the text: the positive relationships in Spinning Silver significantly outweigh the negative, and characters are always rewarded for being kind rather than cruel to those around them. However, these positive emotional bonds always end up becoming part of the framework of deals and promises, working alongside recognisable human economic systems as well as fae-inspired exchanges that encompass knowledge, status, safety and rights. In Spinning Silver, nothing comes for free, because any gift you give still causes the other person to give up something of themselves in return, even if it is just gratitude or a feeling of being in your debt. While I was impressed with how deeply and effectively this system is entrenched into the narrative, I found the implications uncomfortable at times, particularly when it came to the various marriages and the power dynamics within them.

Despite appearances, there's very little romantic love in this book (and you can forget about overt LGBTQIA+ representation). Both Miryem and Irina find themselves in marriages through no choice of their own, and towards the end of the book Irina pushes her female cousin into a quick forced marriage which is universally portrayed as a positive development for the cousin in question. Only Wanda is able to repudiate male power by avoiding marriage, and even then the takeaway is ambiguous: is the problem that her father has been trying to sell her off, or simply that he keeps undervaluing her when he attempts it? Miryem and Irina's only option is to level the power dynamic in their existing marriages: both do manage this, but its hard to escape the fact that these situations are likely to read to modern audiences as dangerous and abusive even at the end.

Spinning Silver doesn't celebrate these outcomes, and I think the text intends us to question the assumption that the ending really represents a "happily ever after" beneath the surface. However, it also makes no apology for the aspects of its value system that may read as negative to modern readers. There's no reason it should, of course: the overall effect will be a feature or a bug depending on the individual reader. However, given that Spinning Silver, like Uprooted, is likely to be recommended on grounds of being a "nice" story, I think its important to note that the regular moments of kindness and solidarity that make this a charming read on the surface are underpinned by a worldview with highly unsettling implications. I wouldn't recommend this as a comfort read to anyone sensitive to abusive or imbalanced relationship dynamics in their media, although I also wouldn't discourage anyone from reading it for the same reasons.

Despite its uncomfortable undertones, however, there's no question that this is one of the best books I've read in 2018 so far. As a technical accomplishment, it's excellent (except for the awkwardly stereotyped autistic-presenting character), hitting a perfect fairytale tone that weaves multiple character's lives together in a compelling way. There's plenty of kindness and positive relationships, especially between women and across cultures, to keep a reader company even during the story's darker turns. I recommend picking up Spinning Silver with eyes open and critical faculties engaged: much like that dark forest at the edge of the town, its not a place to be taken lightly, no matter how lovely it may look from the outside.

Bonuses: +1 Rich, complex worldbuilding that takes fairytale retelling to the next level

Penalties: -1 Yes, that's how marriages work in some cultures... but it doesn't mean I have to like it.

Nerd Coefficient: 8/10 "Well worth your time and attention".