Welcome to the first of a six part series of essays focusing on Katherine Kurtz's Deryni novels. As I am physically incapable of actually reviewing these novels with any semblance of objectivity because they've imprinted themselves deep into my heart, what I am going to do instead is write about the aspects of each of the "Camber Era" novels which have stuck with me throughout the years. Shall we begin? 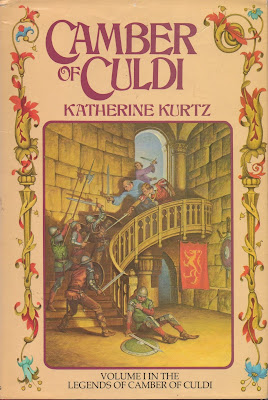 I have struggled for a while now to come up with a way to talk about Camber of Culdi. Katherine Kurtz's Deryni novels have long been a favorite of mine ever since I first discovered King Javan's Year back in 1993 and my small town librarian soon after pushed the earliest set Deryni novels on me. This is where I was hooked. I love Javan's painful story, but the wonder and brutal sorrow of the three volumes of The Legends of Camber of Culdi is really what hooked me on Kurtz. This probably says more about me as a teenager than I'm willing to admit.

Earlier this year I re-read Katherine Kurtz's original Deryni trilogy and participated in a megablogtable here at Nerds of a Feather discussing the first book, Deryni Rising. When I wrote about Deryni Rising on my blog back in June I mentioned that anytime I was looking to re-read Deryni I would invariably return to the Camber era novels because "many of the details that I cared about, the mysteries and the magic and the rituals, were lost by Kelson's time."

The political landscape of Deryni Rising was shaped by 200 years of brutal persecution of the Deryni race. "Deryni", it should be pointed out, are humans who just happen to be able to use magic and have no other differences that I can recall reading about. The original Deryni trilogy drops hints about what happened during that time and about a "Saint Camber" who was, by Kelson's era, little more than legend.  Camber of Culdi begins to tell the story of not only the titular character, but of the events of that era which led to both the restoration of the Haldane family to the throne of Gwynedd but also to the persecution of the Deryni race.

As I mentioned two paragraphs ago, the parts of this novel (and the entire Deryni saga) I cared most about were the "mysteries and the magic and the rituals", so as we step back 200 years in the history of the Eleven Kingdoms, we go from the epic rhyming magical duels of Deryni Rising to a significantly more subtle use of deryni magic in Camber of Culdi. The difference is striking. Where the spells that Kelson uses against Charissa are constructed via rhyme, Camber can use his magic to sift through the memories of another or cause one man to have the illusion of resembling another man. The method Camber uses are ritual and general mysticism. It's magic, but a very internal one. As with the church where there are ritual words used in worship; depending on the magic, there are rituals involved - but those rituals often seem to mirror those of the church in an honest and respectful way. Deryni can invoke the archangels in ritual and it is quite clear that those are real forces. Other uses of the magic involve meditation and training. There are schools that teach healing, a skill long lost by Kelson's era.

One thing that I would like to add to that list of things I like most about Camber of Culdi, and this will extend across the rest of the Camber-era novels is the religion and Kurtz's handling of legitimate faith.

"Think on it, Your Highness," Joram said, rising and moving towards the door. "Where, if anywhere, is the break between your duty to God and your obligations to His people, your people? Is there even a difference?"

Joram paused in the doorway to gaze compassionately at his fellow priest.


Cinhil's faith and his calling to be a priest is central to who he is and how he interacts with the world, especially in light of Joram (a warrior priest, but a priest all the same) asking Cinhil to forsake his priestly vows and accept an earthly crown. In a weaker novel, this would likely be a decision made far easier and with lighter consequences. Here, the agony of this decision is as intense as it could possibly be with immense pressure being brought to bear on Cinhil. This is as it should be. Cinhil has devoted his life to the Church and has spent the previous twenty years or more in monastic life with a vow of silence. It is one of many vows he has been asked to break for the "good" of Gwynedd.

In many ways I see the Deryni Saga as a story of faith and fear and prejudice. This is all tied together with the Church of the Eleven Kingdoms. The "Church", as it is called, is a stand in for the Roman Catholic Church of our world, and in the Eleven Kingdoms it has immense power. The fear and hate of many in the church of the magic wielding Deryni is significant and it is a driving force in the series as a whole.

When Camber of Culdi opens, the Deryni are in power in Gwynedd. The current King, Imre, is not an especially moral or effective ruler, so when the Deryni healer Rhys Thurin learns that one of his patients is actually a descendant of the previous and more legitimate (but human) Haldane dynasty and who happens to have one surviving grandchild...events are set in motion.

As I noted earlier, readers of Deryni Rising are already aware that there was a "backlash" and "purge" against the Deryni in Gwynedd, is it any wonder the seeds of it are sown here when a magic wielding minority brutally came to power some three or four generations prior and now humanity is about to have the chance to "reclaim" their throne and their kingdom? We should know better if we think this will end well. There are hints of that that backlash here in the actions of Imre and that even Deryni are looking to depose a king of their race and restore the throne to humans. Camber and others discuss their fear of retributions and their bare hopes to be able to limit it.

When I think about Camber of Culdi and the earliest set Deryni novels, I think about the religion, the fear, the hate, the beauty, the magic tied to ritual, the so very real faith, and the sense of discovery each page brought. These weren't the "good old days" of the Eleven Kingdoms by any means, but in many ways they were mine.