San Diego Comic Con has officially begun and if you happen to be in San Diego you owe it to yourself to check out Laika Live.  The Laika offsite last year was one of the most memorable comic con experiences I have ever had the good fortune to attend.  When I learned they were returning and my son was joining me I was excited to share this with him. I was happy to see it again, but assumed it would be similar and that was fine with me.  Laika Live is nothing like last year's offsite and has raised the bar in what studios can bring to SDCC. 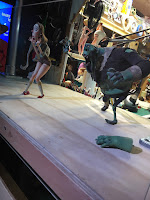 One of the best elements in last year's events was the depth of knowledge that the tour guides shared. You could sense their passion from what their studio was producing and it really highlighted the meticulous work that goes into each film. This year, in addition to bringing props and puppets, Laika brought an office from their puppet department and are making a puppet during the convention. We learned about how the skeletons under the puppets are created, got to see some of the stop motion animation software, and even learned how the puppeteers often film themselves performing an action as the foundation of how they animate their puppets.

The icing on the cake included an entire set from the upcoming film Missing Link. I asked our guide if the animators were nervous hauling on of their sets to San Diego and she said that they are likely ready to be done with it after working on the film for over four years. While it is awe inspiring to see the props and puppets up close, the people behind these beloved films is what makes this offsite special. You can sense their passion for what they do and the entire experience is a delight. If you have the time to check it out I highly encourage it.