Another San Diego Comic Con is in the books and I am safely home and exhausted. I got to share the experience with my 10-year old son and it was a delight to experience everything that SDCC has to offer through his perspective. While it did prevent me from checking out the Deadpool panel and offsite experiences (my friend grabbed me a Deadpool toilet seat cover!), it was great to see how much there was for someone his age to do.


Best Overall Experience:
Laika Live
I dedicated last week's post to it, but after soaking in all four days of the con it is clear that Laika truly cares about each person who goes through its exhibit. You could sense the passion from the employees as we were invited into their amazingly beautiful world. My concerns that it was a rehash of last year's exhibit immediately vanished as they brought a piece of their studio to San Diego. For more about Laika Live check out last week's post. 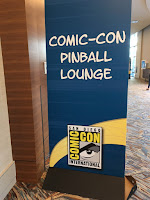 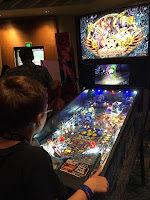 Best Hidden Gem:
Stern Pinball Lounge
Tucked away in the Marriott Maquis right next to the convention center lies one of the best kept secrets of SDCC (although they would like that to change). This marks the second year that Stern Pinball was an exhibitor and partner and upon arriving at the lounge I immediately regretted not attending last year.  In addition to offering over 20 pinball machines set on free play, Stern hosted high score contests and tournaments with some impressive prizes. Stern showed off its newest machine, Iron Maiden (which the band plays on tour), designed by Keith Elwin (the Michael Jordan of Pinball and current #1 ranked player in the world) and featured machines with such licenses as Guardians of the Galaxy, Adam West's Batman and many others.  All of the machines were occupied the entire time I was in the lounge, but players happily allowed the next player to step up upon completion of the game.  It is rare to find the calm in the storm that is SDCC, but this lounge somehow managed to accomplish this despite being a stone's throw from the action.


The Golden Ticket:
Lottery Based Ticketing
With a move to an online lottery for most exclusives and autographs (a move that worked exceptionally well in my opinion), the Funko booth was the hot ticket as it granted you the right to their typical offering of coveted exclusives. While the Funko lottery gods were not on my side, the lottery saved people from camping out just for a shot of what they wanted and allowed con goers to focus on alternative options. I did manage to get a time spot for Hasbro and was able to get my daughter a delightful Chewie and the Porgs set that put a huge smile on her face. I just hope she lets me play with it too.


Final Thoughts:
This year marked the first time in recent memory that there was a lack of hype around the panels. I say this from a hype perspective, and don't mean it as a knock in the programming. The lack of Marvel Studios was felt, but fans were able to line up closer to the actual start of panels and there was little to no drama getting into the big halls. While some fans noted their displeasure, it really felt the the convention was more accessible to new attendees. I had reservations bringing my son to this event (despite seeing thousands of happy kids each year), but I am pleased to report that it was a memorable experience, the volunteers and employees of CCI did a great job, and I am encouraged by the positive changes that the convention is making and has planned for the future.