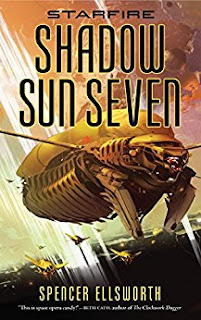 The complex tale of Jaqi, reluctant opposition to a Resistance that has in turn just toppled an oppressive human galactic empire, continues in Shadow Sun Seven, sequel to Spencer Ellsworth debut novella A Red Peace. This second novella jumps off not long after the first. It should be said that discussion of this second volume, a short novel, does necessarily spoil the first novella.

That novella, which posited, explored and depicted a wide ranging universe with half-Jorians, lots of biological weapons and creatures that would fit in a Kameron Hurley novel, and a net of complicated characters. By the end of the first novella, Jaqi, Half-Jorian, and Half Human pilot, had managed to spirit away two children from the Resistance that are looking for them at any cost, and had slowly started to learn that she has a destiny and power that she never knew, a destiny and power tied to the original, extinct race of which she is just a hybrid descendant gene engineered cross. Or is she?

These novellas are secondarily the story of Araskar. Araskar started his life fairly high in the Resistance, and even more poignantly, tied to Rashiya, daughter of the Resistance leader John Starfire. In the events of the first novella, Araskar’s sense of morality and what’s right led him to kill his former love and turn against the Resistance, and join Jaqi’s crew. Thanks to the circumstances of her death, Rashiya’s ghost is a recurring presence in Araskar’s head and provides dry and mordant company for Araskar. Their weird relationship is something that Ellsworth does not use overmuch, and in fact I could have stood far more of.

With this gang assembled assembled, on the run, and with a large price on their heads, Shadow Sun Seven is the story of what happens once this team is together and under the gun. In order to protect themselves from a mercenary group , the Matakas, ooking to cash in on their fugitive status, Jaqi and Araskar agree to lead them on a mission of plunder for an even bigger payoff than they’d get for turning them in. The dynamic between the main characters and their allies is a nice running tension throughout the novel, their lack of trust in each other driving character and plot.

Jaqi and Araskar are the highlights of this novel, from a character point of view but the novel is full of colorful characters, writ large and small. The warrior Z, given relatively little play in the first novel, gets a lot of character development in this novel, as it turns out that Z’s people, the Zarra, have a dark history with the head of Shadow Sun Seven. And so when the gang arrives at the station, Z has a distinct agenda of their own. Also of interest is the Queen of the Matakas, whose negotiation with Jaqi and Araskar is a delightful dance of culture and species conflict.

Worldbuilding is something that readers of my reviews know that I key on, and this novel delivers with verve and invention. The biopunk-esque nature of Ellsworth’s space opera universe continues to delight and interest me as a reader. The expansion of space and length in this second volume over the first, I think, allows the author the opportunity to more fully explore the sometimes gonzo universe that he has created. Far from a standard issue space opera universe with pointy eared and rubber headed aliens in a verse seen a hundred times before, the author provides a breath of invention that allows his characters to inhabit a world that is always surprising. Even as the plot in the abstract is simple and straightforward--an infiltration and break-in with the mercenaries to a mining space station (the eponymous Shadow Sun Seven) to get a valuable commodity (and free the key prisoner), the uniqueness of the world makes it intriguing and fresh. The valuable commodity are pure oxygen cells, uncommon and extremely necessary for space travel. The mining/prison space station is an imaginative space of prisoners, a fighting arena and much more. The aforementioned untrustworthy mercenary allies and their Queen working with Jaqi? They are distinctive and wonderfully realized inhuman, insectoid aliens. And then there are the Moorcockian style soul-sucking swords that Araskar wields.

That breath of invention and reinvention,, combined with interesting characters, a slowly revealing backstory of a universe and a future destiny for Jaqi, make Shadow Sun Seven a winning read. It is novels like this that reinforce and reify my love of space opera, making it tangible and real. This is a most successful jump from novella to novel for the author. I look forward to more with Jaqi and Araskar in this most interesting universe.

Bonuses: +1 for good development of characters backstory and depth +1 for an absolutely gonzo universe overstuffed with intriguing ideas, locations and species.