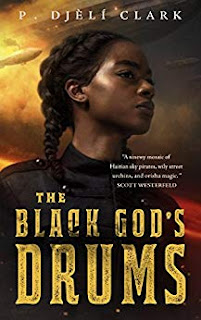 Creeper is a teenager living on the streets of an alternate 1880’s New Orleans, often spending time near Les Grand Murs, the huge wall used as a airship dock in this world’s version of the Big Easy. Creeper has big dreams of being crew on one of those big airships, but to get a chance at that, Creeper is going to have to help the captain of one of those airships stop a plot to unleash a devastating weather weapon designed by a Haitian scientist and coveted by the Union, Confederacy and everyone else.

Welcome to the world of P Djeli Clark’s The Black God’s Drums.

Creeper makes for an appealing and strong protagonist. The book doesn’t really feel like YA story to me although it has some traditional elements of that. The youth of the character, the coming of age story, the relatively breezy pace, and the general tone do earmark it in that direction. There is plenty here for readers of all ages to sympathize and identify with her, as she learns to really understand her connection to the orisha, Oya, and her own other talents besides. Captain Ann-Marie, of the Midnight Robber, is every inch the steampunk airship captain that can and does serve as an exemplar and a role model for Creeper, and a character with her own agency in her own right. I wouldn’t mind a novella from *her* point of view.

The real richness of the novella is it is delight in invention, with an eye for creating a world that is rich for the potential for story and adventure. From the palpable existence of very active orishas, to an alternate history with a Confederacy, Haiti as a Caribbean power, and, naturally, airships, the world that Clark has created is a fascinating one that we only get a small short-novella taste of, but I want to read more of. The vision of New Orleans as a freeport where the Union, the Confederacy, Haiti and other powers all meet and trade, complete with extensive airship facilities is a compelling and fascinating one. There are hints that the world beyond what we see is similarly not the one we know, either, but really, Clark could tell many stories just in the North America and Caribbean around New Orleans. There is just simply a lot of canvas here for the author to unleash her protagonist and other characters upon.

My major beef with the novella is that for the story it is trying to tell, which does have a sequel hook in the offing, is that it feels a little bit breezy and short for all that. The line by writing is very good, crisp and neat, and I was intrigued by that world we see. But for all of that, i think there could have been a little more meat on the bones of the story. While leaving a reader wanting and wishing for more is always a good hook for future stories and novels, it is more frustrating when it comes to the actual story being told. I wanted more “there there” on the story I was getting. It’s not a complicated or particularly twisted story, it is a clean and straight story that feels more like a long novelette than a pitifully short novella. I also am of the opinion that while short stories and novelettes can do “one thing”, by the time you get to novellas, having an additional subplot or two helps enrich the characters and the world. This novella is lacking in that regard

That said, I found the world depicted here to be an intriguing one, and if that sequel hook in this novella does pan out, the promise of this first novella can be completely fulfilled in a subsequent, and hopefully more substantial work.

Bonuses : +1 for a stunning and immersive alternate world with a ton of potential.

Penalties : -1 for being far too breezy and short for the story being told

Nerd Coefficient: 7/10. An enjoyable experience, but not without its flaws