An enjoyable and surprisingly emotional debut. 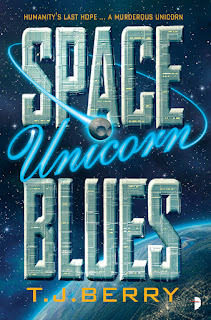 Gary is in trouble. He’s just got out of prison, only to discover his spaceship, the Jaggery, is under the control of a mildly sadistic hustler who wants him to complete three death defying trials to get it back. The first two turn out not to be a problem, but the third is proving trickier: sure, removing one’s hat in public wouldn’t be an issue for most people, but Gary is a half-unicorn, half-human in a world where the fae are actually peaceful aliens called Bala who have found themselves warred upon, enslaved and persecuted since humans developed FTL and discovered their homeworlds. Naturally Gary’s horn happens to be made out of one of the most reliable spaceship fuels in the galaxy, so showing it in a bar full of shady types makes it significantly trickier for him to get out unscathed. In fact Gary’s only hope of escaping without being re-enslaved and forced to endlessly grow rocket fuel out of his head is through cooperating with Jenny Perata, a human war hero who happens to have tortured Gary on his own ship ten years ago, before getting him thrown into prison in the first place.

That’s quite the opener for a space opera, and it only gets more intense as Jenny, Gary and the rest of their crew find themselves racing across the galaxy to deliver a mysterious package to a centennial conference where a third, more powerful alien race is going to judge humans and Bala on how well they’ve been able to cooperate over the past century. Unfortunately, humanity has developed a selective racial memory about this, and is convinced it is going to be judged on its “progress”, a metric which is apparently not incompatible with the exploitation of six planets full of sentient beings. Outside the main narrative, there are glimpses of a society almost like the Hunger Games’ Capital, where the use of Bala bodies and abilities as consumer products is entirely normalised and fashionable. This gives the story an even more desperate edge, as Gary’s options for safety get narrower and narrower in a corner of space that humans have made completely untenable for his people.

It also means this largely action-based narrative carries a lot of emotional baggage, both in terms of the cultural treatment of the Bala (which effectively amounts to ethnic cleansing, and involves atrocities even worse than Gary's potential enslavement), and in terms of the history between Gary and Jenny. Because, yes, the former abuser becomes a sympathetic point of view character, and is portrayed in a way that makes it hard to reconcile her perspectives and actions with the things we know she’s done to Gary, and other Bala, in the past. For much of the book, the characters are so focused on survival that it seems like the narrative might just run out of space to address Jenny's past, which includes locking Gary up, mining his skull for horn-fuel, and getting their ship stranded so that the only option for survival requires the death of another crew member (unicorns regrow their horns by eating special bugs or, in a pinch, animal bones). In the end, though, Jenny doesn’t get an easy “out”, with her choice to own up to her past and what it means for the behaviour of humanity contributing to a very sub-optimal ending for her character (though one that’s wide open for a sequel). I suspect the way that Space Unicorn Blues handles characters with histories of abuse will frustrate many readers, but its not entirely swept under the carpet.

Space Unicorn Blues has diverse representation on the human side: Jenny is Māori, lesbian and uses a wheelchair; Ricky the hustler is trans and from a Chinese family, and Gary’s human mother is Indian. There is a white man on the crew, Jim, who is effectively a bundle of tropes associated with gross white male privilege, but is kept around because he’s useful for getting the ship through checkpoints without scrutiny. (This might be a bit on the nose for some readers, but I honestly can’t fault it...) Unfortunately, the fantasy elements don’t embody the same diversity as the humans: it’s very much a “European with a couple of brief nods to other cultural traditions” mythology which, coupled with the non-European cast and the background which assumes all humans identify the Bala as belonging to “their” legends, puts elements like unicorns and dwarves into an unrealistic position of cultural universality. It’s less glaring than, say, the Europe-with-a-dash-of-Asian mythological colonisation of North America in the October Daye series, but still disappointing in a book which does so well on other metrics. The problem is compounded by the fact that the sense of Bala culture is the weakest aspect of the worldbuilding – all we really get is that these were largely peaceful, disparate groups of people who fell to human aggression despite being significantly more technologically advanced at the time of First Contact, because humans are The Worst. It feels obnoxious to complain that Berry hasn’t done enough to justify the inclusion of unicorns in a book which is literally predicated on being a mash-up of science fiction and unicorns, but it's still an aspect I hope we see expanded on in future instalments of the series.


All in all, I liked Space Unicorn Blues a lot. The story is compelling beyond the initially gimmicky premise, and Berry has done a great job of creating a spacefaring human diaspora that feels real and diverse, as well as integrating heavy subject matter in a way which is reasonably sensitive without overstraining the fast-paced narrative. I’d love to see stronger depth and diversity of worldbuilding in the inevitable sequels, but as a debut novel Space Unicorn Blues remains an impressive and highly enjoyable read.

Penalties: -1 You want me to sympathise with her?