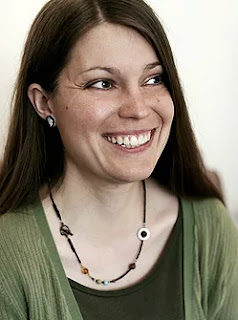 Becky Chambers is the author of the science fiction novels The Long Way to a Small, Angry Planet, A Closed and Common Orbit, and the upcoming Record of a Spaceborn Few (July 2018). Her books have been nominated for the Hugo Award, the Arthur C. Clarke Award, and the Bailey's Women's Prize for Fiction, among others. She also writes essays and short stories, which can be found here and there around the internet.

The Glass Universe, by Dava Sobel. It’s a nonfiction book about the women “computers” at Harvard who studied the stars. I love books about the history and humanity of science, and this one is scratching that itch so hard. It’s got a great (and real!) cast of characters, and anybody who’s interested in astronomy should learn about this brilliant team who shaped our view of the cosmos.

This is going to be a terrible answer: I can’t tell you, because it hasn’t been formally announced yet. And I know, I should just tell you about something else instead, but now I’m on the spot and it’s all I can think of. That’s so annoying of me, I’m sorry.

My to-read pile is a constant source of guilt and despair, so I doubt I’ll have the luxury of re-reading anything anytime soon. But: Changing Planes, by Ursula K. Le Guin. Her work, and that book in particular, were cornerstones of me going on to write science fiction at all. I went back and read a little bit of it when I learned of her death, but I would like to sit down and properly go on that journey again.

This hurts me to admit this, but Dune. Dune rocked my world when I was a teenager. I ravaged my paperback copy with dog ears. I memorized the Bene Gesserit litany against fear. I adored Alia, the tiny all-knowing girl who scared the high holy hell out of everyone she met. It’s a tremendously important story in science fiction as a whole, and I still think a lot of its elements are great. But wow, the gender politics in that book are a hot mess, and the fact that its lone gay character is both a super evil villain and a disgusting pedophile does not sit well with adult!me at all. Oof.

I’ve got a bunch, but since I have to pick one: Contact, by Carl Sagan. I saw the movie in my tweens, when it was in theaters. I bought the book soon after, and I read it until it started to fall apart. Ellie Arroway taught me that women could be brilliant heroes who go on space adventures (Jadzia Dax and Princess Leia were big parts of my life then, too, but Ellie was a contemporary character in a realistic story, and that mattered big time). The extraterrestrial welcome party she finds taught me that alien contact could result in something other than war. Carl Sagan taught me that the universe is poetry, and that learning about it makes us humble and inspired and afraid and at peace all at once. I carry those ideas with me in everything I write. As Ellie learns: “For small creatures such as we, the vastness is bearable only through love.”

Record of a Spaceborn Few is the third book in my Wayfarers series, and it’ll be out in July. It takes place in the Exodus Fleet, the collection of generation ships that carried the last humans away from Earth hundreds of years before our story starts. The crux of the book is this: if the point of the Fleet was to find humanity a new home, and plenty of new homes have been found…why are people still living there? How has their culture changed due to alien influence? How can they preserve their traditions, and are those traditions worth saving at all? I had a lot of fun tackling those questions, and I hope readers will dig it, too.