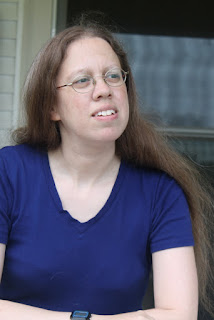 Ruthanna Emrys is the author of the Innsmouth Legacy series, including Winter Tide and Deep Roots. Ruthanna co-writes Tor.com's Lovecraft Reread, and writes radically hopeful short stories about religion and aliens and psycholinguistics. She lives in a mysterious manor house on the outskirts of Washington, DC with her wife and their large, strange family. She makes home-made vanilla, gives unsolicited advice, and occasionally attempts to save the world. You can find her online at http://www.RuthannaEmrys.com and as @r_emrys on Twitter.

I always have a stack of books-in-progress—my main fiction reading, research, and something I dip into for comfort when the news gets too much. (I go through those last quickly.)

Main fiction right now is Malka Older’s Null States. I loved Infomocracy, the first book in the series, and one of my current obsessions is different ways that societies can be governed. Null States seems to be answering a bunch of questions I had about the places microdemocracy screws up. It also takes place in South Sudan (or a centenal in what used to be South Sudan), where both Malka and my sister have been aid workers, so I like reading something inspired by that experience as well.

Research: I’m reading Charles Mann’s The Wizard and the Prophet, which is about technologically optimistic versus pessimistic approaches to environmentalism, and Adrienne Maree Brown’s Emergent Strategy, which is social justice philosophy and how-to based on Octavia Butler’s Earthseed. Have I mentioned I’m obsessesed with governance and world-repair at the moment?

Comfort: Lois McMaster Bujold has a new Vorkosigan novella out, The Flowers of Vashnoi, which I’m enjoying the hell out of. I also just finished K. J. Charles’s The Henchmen of Zenda, which is exactly what it sounds like except more queer.

There are so many good books coming out in July! The top of my list is probably Becky Chambers’s Record of a Spaceborn Few. She writes these amazing hopeful space operas where humans are still a bit of a mess, but we’re trying our best and get to be part of the Big Interplanetary Community anyway. I’m also excited about Theodora Goss’s European Travel for the Monstrous Gentlewoman and Seanan McGuire’s Girl in the Green Silk Gown and Naomi Novik’s Spinning Silver and Mary Robinette Kowal’s The Calculating Stars. I’m not even starting to think about August.

I was looking through my books trying to find the one I thought it was, and ended up pulling out Ursula Vernon’s Jackalope Wives to reread “That Time With Bob and the Unicorn.” So I guess it’s that one. She writes the most wonderful stories full of gardens and sensible crones.

4. How about a book you’ve changed your mind about over time—either positively or negatively?

I loved Little House on the Prairie growing up. All the details about building houses and making food from scratch caught in my imagination, and made me want to build and bake and get my hands on things. Then a few years ago, I was looking for a plot to steal and thought Prairie might be a good source. (The story in question, never published, was about a pioneering community in a dinosaur-filled lost world.) So I reread it and... no. Just no. Now Pa’s horrible morality stands out to me far more than his DIY exploits. The book is full of racist rants, and if you know anything about Laura’s real-life bio he was constantly violating Native territory, building up debts, and fleeing them just as the Ingalls family got comfortable.

5. What’s one book, that you read as a child or adult, that has had a lasting influence on your writing?

Janet Kagan’s Hellspark, and then Edward Hall’s spatial anthropologies that she recommended in her forward, made me think about body language as characterization and communication. It’s a wonderful first contact novel, but the thing that stayed with me was how our comfort with other humans is so dependent on how close we stand, how we stand, whether we share the same idea of conversational distance and intimate distance. And how so much of empathy is being willing and able to translate someone else’s space into your own dialect. It changed how I write, and it changed how I talk with people.

6. And speaking of that, what's *your* latest book, and why is it awesome? Deep Roots is the second book in the Innsmouth Legacy series. It follows pretty closely after the first, but all you really need to know to pick up the thread is that Aphra Marsh is trying to rebuild her childhood community, destroyed in a government raid, and is looking for long-lost cousins in New York City. And that said community was populated by an amphibious branch of humanity, feared as monsters by their neighbors. And that the Cold War is just starting up, and aliens as well as humans of all kinds have Opinions about whether and how to stop humanity from blowing themselves up.

What’s awesome? Well, there are aliens, who like to steal people’s minds out of their bodies and give them grand tours of the universe whether they like it or not—and who aren’t convinced that humans can handle their own politics. There’s extremely fraught astral travel. There’s found family, caught in a psychic bond without much planning, trying to navigate building a real relationship. There are batrachian elders getting into arguments at Coney Island. There’s queer romance, and intense friendships, and enemies forced into tenuous alliance. I don’t know, what do you think is awesome in a book?