Against the common cliché that expects very little quality from videogame adaptations, this miniseries explores the danger of hunger for power with the depth of prestige TV 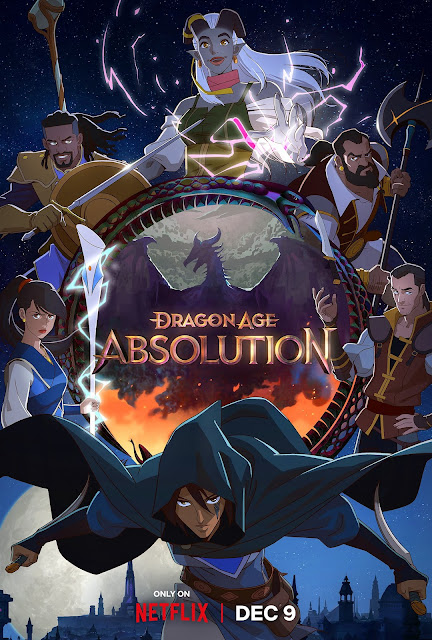 Across the iterations of the Dragon Age line of videogames, the common message has been about the tragedy of too much ambition. Time after time, someone seeks a quick path to greater power, and soon the repercussions become everyone's problem. Variations on this theme of human hubris range from the cosmic to the quotidian, turning the history of Thedas into a long series of misguided attempts to correct the excesses of the previous misguided attempt.

Any resemblance to actual events, etc.

The new Netflix miniseries Dragon Age: Absolution offers a chilling portrait of the insidious way ambition can seduce and eventually destroy. In a fantasy empire where humans reign and elves are a subjugated underclass, those in positions of power have seemingly never needed to learn that using others is wrong. The practice has taken root so strongly that it's reflected even in the smallest misdeeds: every time a character in the series is revealed to have done something bad, the badness is defined by a choice to use people—sometimes literally. This is consistent with the way the Dragon Age franchise has usually represented evil: humans using demons, demons using humans, humans using elves, Qunari using mages, mages using blood, mage hunters using lobotomized mages, armies using children, the noble families using each other as pawns... it's a very Kantian stance where the hallmark of evil is failing to see other people's autonomy and instead seeing only their usefulness. The main religion of the continent even has as its main precept that magic (i.e. power) should serve us, not be served by us. The fatal mistake of every overconfident mage in this setting is to lose their sense of purpose and become a plaything in the service of power.

What this worldview does for the Absolution miniseries is provide a moral anchoring point for characters' actions. One villain is so controlled by resentment that they plan to make a whole civilization pay for the atrocities committed by their rulers. Another is so disconnected from the lives of ordinary people that they plan to break the laws of nature to keep their former playmates. Even our heroic protagonist is at one point guilty of sacrificing the safety of a child to fulfill a job. And in each case, a plausible-sounding case might be made for those terrible choices. This is a world that puts people in impossible situations and continues to punish them for desperately trying to break the cycle of mistakes. However, this is not a bleak world. The reason this particular type of moral failing has been represented so many times across Dragon Age continuity is not because the writers want to impart a nihilistic view; it's because multiple examples of the same mistake serve to illustrate how many opportunities people get (and miss) to make the world better. Nothing forces the factions in the setting to mistrust and scheme against each other; it's the unnecessary pattern of paying back revenge with more revenge that keeps the world burning. Underneath every well-written tragedy is this humanistic hope: it's not that the universe is fundamentally tainted; it's that people could choose better but don't.

The starkest metaphor for the way evils works in Dragon Age is blood magic, a route to power literally fueled by the suffering of others. In a neat practical symbolic package, blood magic can stand in for numerous forms of sociopathy, indifference, or exploitation. Quite intentionally, Dragon Age lore is vague enough about the earliest era of its universe that it's debatable whether it was the first demons who used the first humans or vice versa, but what is certain is that the theme of weaponizing others for one's ends is firmly established in the very foundation of the setting.

This is what makes the character of Rezaren, the main antagonist in the Absolution miniseries, so instantly compelling to watch. He is so deeply convinced of his own good intentions that he doesn't notice the incongruity of resorting to blackmail, backstabbing, torture and enslavement in order to regain a distorted idea of childhood harmony. In our times, we're sick of hearing of the ties between totalitarianism and toxic nostalgia, but the boring trope exists for good reasons. Rezaren exemplifies the villain with a motivation disproportionately smaller than his methods. A lifetime of infinite privilege has rendered him incapable of empathy, because, for the pampered nobility he comes from, the pain of growth is not a normal part of life but an embarrassment that must be punished.

Dragon Age: Absolution relies on too many flashbacks, which do the pacing no favors, but one key event in the past of both the heroine Miriam and the villain Rezaren is revisited from their opposite perspectives in a narratively fascinating manner. It's unfortunate that the plot takes so long to get to its actual theme (there's an air of the perfunctory in the boilerplate D&D party adventure of the first two episodes), but once the viewer learns what this series is actually about, once the extent of Rezaren's evil is exposed, the rest of the story goes by in a thrilling breeze. The mage Rezaren is a fantastic achievement of characterization precisely because of how casually appalling he can be. And again, we see an effective use of ambiguity in the portrayal of his backstory: is he a bad person because of the elitism of his upbringing, or was he honestly a good child who only turned bad because he was briefly in contact with a demon?

Be that as it may, Rezaren outshines our heroes in terms of viewer's interest. We've seen D&D campaigns so many times it's difficult to present an interesting group dynamic that doesn't resemble every game we've played. Rezaren is something else. He's so deluded by his privilege, so oblivious to the inherent dignity of others, that he considers the death of a slave as an affront to his property rights. He has lived such a suffocatingly sheltered life that he cannot comprehend why his former enslaved playmate would want nothing to do with him, and he even offers to enslave her again as if he were doing her the greatest favor.

The tragedy of Rezaren is that he knows no way of interacting with people apart from using them. This is nominally supposed to be Miriam's story, the epic journey that reconciles her with herself and heals her inner wounds, but as usually happens in epic stories, the heroine's victory is only as interesting as the villain's villainy.

If the viewer only gets to the first episode, it would be easy to be fooled by the appearance that Dragon Age: Absolution is like every other D&D-adjacent show. Miriam's companions are assorted flavors of generic archetypes and comic relief. But finishing the series (which should have been a single feature-length movie, honestly) is very much worth the less than stellar beginning. The combat scenes are decently animated, and the visual style fulfills its function of catching the eye, but where the show excels is in the moral drama. To be clear, there's never a doubt that Rezaren is in the wrong; there's no possible "other side" to the argument. What nonetheless makes him such an interesting character is how easily self-deceived someone can become when no one dares challenge the proclaimed goodness of their intentions.

Rezaren is a complex, fleshed-out villain on a par with the most wicked that Game of Thrones or its imitators can offer. There's no mystery to his motivation; there's just an incorrigibly warped perspective that no amount of emotional contact can fix. That such a feat of writing was possible in just six half-hour episodes is reason enough to recommend Dragon Age: Absolution. But for fans of fantasy warfare, heist missions gone catastrophically wrong, or gruesome forbidden magic, there's abundant material to sate that hunger. There's also a dragon, if you're into that. But the seriousness with which this story addresses horrifying extremes of pride, ambition and callousness is the true jewel hidden inside the sparkling, colorful exterior.

Bonuses: +1 for the touch of genius that was using an imprisoned dragon to symbolize the lingering tensions of a highly unequal society, +1 for creating a villain that is at the same time fully reprehensible and fully understandable.

Penalties: −1 for excessive exposition of world history facts that are foreign to this specific plot.