This latest novel from the master of alternate history is part amusing, part terrifying, and mostly frustrating 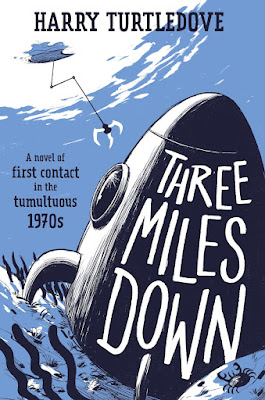 Let's begin with the events that are part of real life:

On March 8, 1968, the Soviet submarine K-129 sank with 98 crew members in the middle of the North Pacific. The Soviet Navy made several attempts to find it, without success. In August of the same year, the American submarine Halibut located the site of the wreck and took photographs of it. As a result, President Nixon authorized a secret CIA mission to bring the submarine to the United States in order to seize its nuclear weapons and cryptography manuals. For that purpose, a specially modified ship, the Hughes Glomar Explorer, was built to resemble a drilling ship, but it actually carried an extendable claw that would grab the K-129 and pull it up to the surface. In 1974, the ship was sent to the Pacific, while businessman Howard Hughes, under CIA instructions, gave the press the cover story that the operation was merely about mining manganese in the ocean floor. As it turned out, the hull of the submarine was broken and only a small part of it could be recovered. To this day, the exact location of the wreck and what was found in it are classified information. In fact, the heated controversy that erupted when the operation was made publicly known led the CIA to invent its trademark "can neither confirm nor deny" response.

And here's where alternate history writer Harry Turtledove inserts the fictional hook: What if the K-129 was sunk by aliens? What if the CIA mission wasn't so much interested in finding the submarine as in getting to the crashed spaceship before the Soviets did? And what would such a technological treasure trove in American hands mean for the course of the Cold War?

Turtledove's novel Three Miles Down is advertised as a first contact story, but, at the risk of spoiling the last sentence of the last chapter, I must warn the reader that that description depends on a generous definition of "contact." The bulk of the novel is concerned with a fictional marine biologist/aspiring science fiction writer, Jerry Stieglitz, who is suddenly recruited to participate in the submarine recovery mission as a junior scientific advisor. Although his rank in the mission is rather low, he becomes instrumental in figuring out the secrets of the alien spaceship and designing protocols for first contact.

However, what little we get of actual "contact" isn't enough to compensate for the interminable political discussions that fill the book. In real life, the secret mission coincided with the final weeks of the Watergate crisis, and Turtledove takes advantage of every available chance to tell the reader what each character thinks of Nixon. A disconnect in worldviews quickly becomes evident: Jerry is the poster image of the '70s liberal hippie, but his positions sound jarringly retrograde to the 21st-century reader. During his preparation for first contact, he reflects on human history and concludes that "The settlement of the New World seemed about as close to contact with aliens as people had ever really come."

Three Miles Down is written in a longwinded style, pausing on each step of each small movement to describe it in full, painstaking, laborious, minutiose, detail. Even the simple action of staying in place gets the circumlocutionary transmogrification: instead of writing "The ship kept its position," Turtledove writes "She got there and she stayed there and nowhere else." This habit gets even more irritating when added to the book's penchant for the unprompted digression. Two characters may be discussing the structural stability of a piece of machiner, and if the reader blinks, they'll have switched to movie awards for adaptations of conspiracy theory literature. Another conversation starts with the bodies of dead sailors found under the sea and somehow swerves to fun facts on genre fiction market trends.

With a more compelling protagonist, these authorial quirks might be more palatable. However, Jerry Stieglitz is not easy to get used to. He thinks almost entirely in terms of pop culture references that he's always proud to assume other people don't know. Too often, he jumps to think of a science fiction story he's read so he can compare it with the situation he's in, which only contributes tiny moments of flavor to the novel at the cost of hearing Turtledove discreetly coughing in the background, pointing at his personal library. Whenever Jerry has an original idea, the rest of the characters congratulate him on having the unconventional creativity of a science fiction writer, which, in a book written by a science fiction writer, can't help but sound cringeworthily self-serving. And when he's not thinking of science fiction, his mind goes to a less savory place: at one point he looks at the spaceship "with an avidity he hadn't known since the very first time he opened a Playboy to the centerfold." Between making off-color remarks about women, coming up with private inside jokes about everything, and playing petty power games with his fiancée, Jerry comes off as a status-obsessed patriarch wannabe.

More than the narration of an adventure, Three Miles Down can be taken as a portrait of a pivotal era in Cold War tensions, in gender relations, and in the science fiction scene. There's almost as much plot dedicated to Jerry's newlywed domestic hurdles as to his dip into international spy secrets. The big promised moment is delayed for so long that the story comes very close to not even counting as alternate history. The reader who expects to see how alien contact will change the world will be sorely disappointed by this book. Its actual focus is on how alien contact changes one guy. If you can stomach the guy's personality, then you'll find something to enjoy here.

Bonuses: +1 for a rigorous handling of its timeline.

Penalties: −1 for outdated gender politics, −1 because the ending leaves the reader feeling cheated.