Maybe there's a parallel timeline where 'The Peripheral' hit the mark 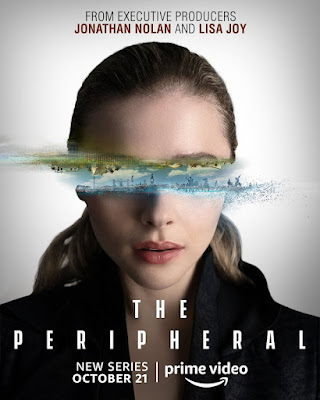 Amazon Studios TV series The Peripheral, an adaptation of William Gibson's 2014 novel, has come up with an original angle on the overstretched "metaphor for class inequality" trope. In this story, scientists from the late 22nd century create alternate possible pasts where they can run unsanctioned experiments on live humans with cosmic impunity. Those other timelines are not seen as having real moral value, but in one of them lives our protagonist, Flynne, an experienced gamer who stumbles upon these secrets after beta-testing a new VR headset, and who is determined to defend her and her world's inherent right to exist.

This is an amplified echo of the cry of protest you can hear from exoticized peoples: Your Vacation Is My Home. Or, in The Peripheral, something more like Your Disposable Petri Dish Is My Spacetime Continuum. Such a concept sounds like it could spark lengthy discussions about the colonial practices still embedded in scientific research, the ethical loopholes of the gig economy, the rights of counterfactual agents, the mutual responsibilities between generations, and the still unsolved safety issues with brain-computer interfaces.

Unfortunately, the show doesn't meet the high expectations set by its premise. A research institute officially known as The Research Institute and a cleptocracy of mafia bosses collectively known as the Klept are the first signs that The Peripheral devoted only the barest of efforts to worldbuilding. Our near future, as shown in a small town in the southern US, looks almost like the present, with the changes established mostly in dialogue: stratospheric medicine prices, a vaguely mentioned Texan war, ubiquitous 3D printing, far superior video game graphics. With the supporting characters, the show follows the opposite approach: they are established implicitly, with minimal exposition, and the viewer doesn't connect who works for whom and who is whose childhood friend until well into the season. The mental bandwidth expended in keeping track of the scant clues about these characters detracts from the viewer's ability to follow the plot.

In the scenes set in the 22nd century, these deficiencies are multiplied: three separate factions are described but not properly introduced until the halfway point, and Flynne, who should serve as our eyes into that society, is persistently kept in the dark about how it works.

Worse problems afflict the visual style of the 22nd century. We only get to see future London as a vague skyline that blends impossibly cyclopean statues with incompletely rendered ruins, or as deliberately secluded side streets that look like the production team only had access to a small number of set designs. It's true that this society is recovering from multiple catastrophes that killed a huge portion of the world's population, but it's inevitable to get a sense of artifice from the continued recourse to the same few sets and the same few immensely powerful characters without ever learning how ordinary life proceeds for the average human.

The conflict between the near future and the not so near future is hindered by unnecessary mystery. Flynne only discovers what the villain wants from her in the last episode, and then almost by chance. Until then it's hard to get invested in the stakes of her fight, because the show insists on delaying as much as possible the moment of letting the viewer know what every faction wants. The lead characters of this future act as if they were facing an imminent crisis of utmost urgency, but then they spend interminable scenes sitting for tea to exchange barbs about their respective leverage and strategic weak points, and it's no longer believable that there's anything actually being fought over.

The Peripheral suffers gravely from this intentional slowness. Each episode spends too much time in revealing too little at a time, and the way the final two episodes resolve all the plotlines may as well have occurred just after the pilot, if only these characters stopped walking around, looking menacing and launching indirect taunts. This ungenerous pacing, combined with the barely-there London of the future, deals a near-fatal blow to the viewer's suspension of disbelief. It's no wonder that the villains managed to convince Flynne that she was playing a video game instead of visiting a physical place, because this supposedly broken and polluted London looks too small and too fake to take seriously.

There's no word yet on whether Amazon will produce a second season of The Peripheral, but if it comes to pass, the producers should ask for a higher VFX budget or larger outdoor sets, and stop being smugly mysterious just for the sake of being smugly mysterious. The viewer is supposed to be given a reason to care, and this first season relied too much on hidden agendas kept hidden too long for the resolution to have the impact it should.

Penalties: −1 for the criminal underutilization of Alexandra Billings, −1 for having a tad too many extraneous subplots, −3 for the whiplash of following too slow a beginning and middle with too rushed an ending.