Avatar: the way of self-indulgence

James Cameron's new toys are pretty and shiny, but do they mean anything? 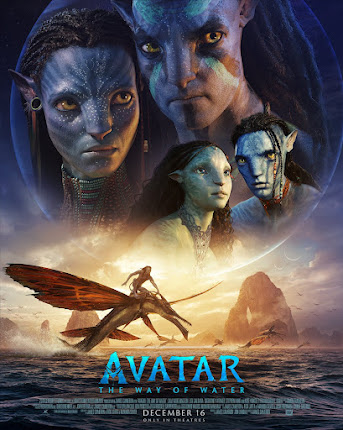 Back in 2009, it seemed like the first Avatar film would set the standard for visual effects for decades to come. It was a completely unexpected technical masterpiece that wowed audiences with hyperrealistic landscapes capable of lulling the mind away from the embarrassing flatness of the characters and the story.

Look at us now, jaded and benumbed by four Avengers, one Gemini Man and three Hobbits. We're in an era when digital magic doesn't impress the way it used to. The sequel Avatar: The Way of Water is doubtlessly gorgeous, with lifelike beasts that look solid and tangible, and edge-on shots of 3D ocean surfaces that make the viewer sway in the chair with the waves. But moviemaking isn't just composing beautiful frames. Despite all the trailblazing technical innovation created expressly for this film, the three hours of Avatar: The Way of Water end up feeling like a three-meal course made entirely of plain water.

We return to the exomoon Pandora, where humans continue to exploit natural resources with no respect for the native population. It's been roughly 15 years since the events of the first Avatar, and our human-reincarnated-into-alien protagonist Jake Sully is now a family man. But the greedy humans are back with a vengeance, and Jake has to flee with his family to avoid bringing any further destruction to the natives. And here we have the first eyebrow-raising choice in this film: the implication that 15 years of Jake integrating into an alien ecosystem and culture to raise four kids of another species doesn't seem worthy of telling, and only when humans reenter the scene do we get to continue the story. For all the lip service that this franchise professes to respecting indigenous communities, it's, at the least, noteworthy that director James Cameron only tells the parts of this community's story in which their colonizers get involved.

Once the basic conflict is established (emphasis on basic), the rest of the movie is an extended theme park ride followed by an admittedly good battle sequence. Avatar: The Way of Water repeats numerous plot beats from the original, dropping our focus character into an unfamiliar environment where he needs to learn the rules of survival, earn the trust of the locals, and fight to defend his new home. We hear the same vaguely New-Agey platitudes about interconnectedness and the cycle of life, we're told again that the whole world functions as a hive intelligence, we watch yet another predatory expedition to destroy a natural beauty for (literally) astronomical profit, and we're left with the same simplistic message: nature good, humans bad.

Worse still, this repetition of preachy talking points occurs without the already minimal character development of the first Avatar. Four alien teenagers are introduced with the single personality trait of "they're teenagers." The lead duo are reduced to the most commonplace clichés of married couples in movies, with a Jake who has confused martial discipline with parenting, and a Neytiri who only reacts to events by making concerned faces but leaves no footprint on the plot. The return of archnemesis Colonel Quaritch might suggest a thematic statement about the damaging effect of human intervention (mirrored in Jake's clumsy attempt to raise his alien kids by introducing them to all the bad parenting techniques of Earth), but that's not what Cameron is interested in exploring. We're here to gasp at picture-perfect fish, not to reflect on the mistakes of humankind.

Even when the dialogue alludes to the ecological problems back on Earth, that crucial piece of context isn't afforded the prominence it should have. Colonel Quaritch's personal vendetta against the Sully family feels absurdly small compared to the actual problem of the entire human species planning to move to Pandora permanently. A plot development that raises the stakes of the main conflict in exactly the way a sequel is supposed to doesn't get more than a throwaway line that Cameron evidently doesn't intend to address until a future movie. The same frustrating approach is used with the character of Kiri, the only truly interesting addition to the story, who spends the length of the movie carrying a neon sign that flashes "I'll matter later."

If Cameron gets his way, we'll have three more entries in this franchise. The problem with multiple sequels in the Age of Marvel is that directors have forgotten that films are not, and should not try to be, TV episodes. Avatar: The Way of Water would have been a serviceable filler episode in a streaming show, with its temporary change of setting, a self-contained chase subplot, and just enough links to the larger arc. But as the standalone movie it should have been expected to be, it's drowned in blue pixels that enchant the eye but have very little of substance to say.

Bonuses: +100 for once again pushing forward the quality of visual effects in cinema.

Penalties: −100 for having only the faintest, digitally rendered shadow of a plot, a theme, or actual characters.