A.M. Tuomala’s picaresque Map and Territory presents a pair of mismatched protagonists, who must learn to survive together as they journey across a landscape devastated by an apocalypse. 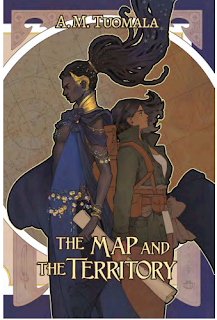 Meet Rukha. She’s a mapmaker and a cartographer, and is engaged in that art when disaster strikes the nearby city of Sharis. She quickly starts to realize the scale of the problem is greater than a tidal wave flooding one city, and determines she needs to get home and find out how her family, her home, is faring. She needs to, in other words, map out, chart out the scale of the problem and get to familiar ground.


Meet Eshu. He’s an up and coming wizard, and he is caught in the horns of this disaster, just as Rukha is. Unlike Rukha, he has a direct way to get back to where he needs to go, via the Mirrorlands, a realm accessed by specially crafted mirrors that acts as a hyperspace to connect distant parts of the world. But the Mirrorlands themselves are affected by this disaster and so getting home will be much harder than just stepping through a mirror.


Their story, as they seek to return back to their homes, and loved ones, and lives, is the matter of A.M. Tuomala’s Map and Territory.


This is a novel rich in a diverse, queernorm and interesting secondary world. The nature of the problem and having a wizard and a mapmaker as main characters means that we get to cross a lot of ground and see the variety of what has happened, and how people are adapting, changing, surviving and dealing with their local problems. This really defines and works on the picaresque model of fiction. The loose overarching plot is for both Eshu and Rukha to get to their respective homes but it’s a long and perilous journey, full of wonders and dangers along the way. From a mysterious god of death to a desperate populace trying to escape a doomed city by airship to a travel across lush jungles, Eshu and Rukha, and thus the reader, get immersed in a lot of richly detailed locations.


A lot of that richness goes to culture as well. Use-names are extremely important in this world and society, and so for most of the book, Rukha takes on the name Fern. There is symbolic practicality to this (in a world where wizards and names are a thing). That is just the beginning as we see customs, foods, ideas, other forms of address, forms of relationships (diverse and queer throughout) and get a rich sensory detail of it all as we travel across the world with Fern and Eshu. There is something comforting in following the two, even through misadventure and falling in the wake of a catastrophe (which is not cozy, mind you).


I particularly and really liked her depiction of the Mirrorlands as a place of impressions and where geography and finding things was less a matter of accurate precision and much more of an experiential and experienced thing. While at first this might seem to be striking directly at the core of Rukha and her abilities, this is also a plot and worldbuilding point later in the novel as well, showing a deft sense of craft in picking up worldbuilding laid down earlier and turning it into plot and features later on.


Indeed, a lot of the novel works on that. The name Map and Territory goes to the well worn phrase “the map is not the territory” and indeed, as we learn in this work, they most definitely do not. This is not a facile story of a cartographer who “learns better”, mind, it is rather a story of two people who learn new skills and new ways of living in the wake of an apocalypse that changes everything for them, and the world.


But in them learning new skills and new ways, there is some lovely geekery here that I really enjoyed. As a cartographer and a mapmaker with a keen eye for geology and the terrain. Rukha/Fern feels like a protagonist made specifically for me. She feels like a lovely corrective to so many fantasy novels and stories where the geology, the shape of the world and the maps that show that world do not make sense in any sort of way. Sure, Rukha has to deal with a world changed in the wake of a magical aftermath, but she still understands the rocks and bones of the world (to quote my friend the author Gillian Pollack) very well indeed. That geekery comes out onto the page.


In a more fantastical vein, Eshu goes in for geekery of more scholarly and magical vein. It is from him that we get a lot of the magical knowledge and worldbuilding that goes along with that. He is our point man on mirrors, and magic, and looking toward what happened and why to the world. He provides us with a lot of the capital of the magic systems, and for being a wizard more interested in books than anything, also has the most prevalent and stickiest of the social webs of our two protagonists as well. This is a clever and interesting inversion of tropes.


I am going to give this book some high praise. The wandering adventures of this duo, across a fantasy landscape, having adventures, getting into trouble, finding what has happened to the world, is reminiscent to me of the best of this genre of picaresque fantasy, in the tradition of Jack Vance. A cartographer and a wizard wandering across a landscape, running into Gods, demons, strange creatures, disasters, and differing human cultures is definitely in the Vancian tradition. And it is definitely my sort of jam.


This is the kind of novel, though, being that sort of affair, where we reach a resolution point (and an extreme clever subversion of the final conflict), we don’t have all the questions answered, not everything is resolved. There are some moves toward explanation and resolution but in the end the reader is left to wonder if a couple of the theories proposed by Fern and Eshu are actually correct in as what happened, why it happened and what can be done. To reveal what this theory is, is beyond the scope of this review and I leave it for the reader to uncover and discover.


In the end though, the sense of wonder and mystery infuses this work and provides a counternarrative to the type of fantasy that explains every detail of the magic system and how magic works (which also is in this very book in trying to explain Mirror Magic and runic magic). That sense of magical wonder is a definite feature and abiding theme of Map and Territory, and as a reader, I think you will find much to find favor with, here.


A.M. Tuomala’s picaresque Map and Territory follows the footsteps of the best traditions of secondary world fantasy travel narratives like that of Jack Vance, C.J. Cherryh, and K V Johansen. With a pair of well drawn, queernorm characters to guide us and be our entry point, Map and Territory is a riveting journey across a diverse and interesting fantasy landscape that is suffering a mysterious, multi sided cataclysm. Tuomala's work makes us consider who and what is important in the wake of disaster, change and trouble, and what we can each do when confronted by seemingly insurmountable problems larger than ourselves.

Bonuses: +1 for a strong and interesting worldbuilding

+1 for the wondrous of the picaresque style, executed well

Penalties: -1 A couple of shifts of point of view are not quite as effective as they might be.