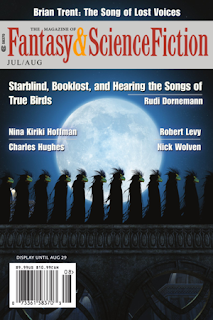 The Magazine of Fantasy and Science Fiction, Jul/Aug 22

There's nothing that stands out particularly strongly in this issue of Fantasy and Science Fiction, but its an intriguingly wide ranging read nonetheless, starting with the surreal religious journey of Starblind, Booklost and Hearing the Songs of True Birds by Rudi Dornemann, and ending with Ciccio and the Wood Sprite, an original Italian folk story which takes folkloric elements like wishes and fairyland time weirdness and creating something timeless and intriguing. I felt The Garbage Girls by Nick Wolven slept on the most intriguing element of its premise: its set in a refugee camp in the USA taking in both climate refugees and homeless and vulnerable folks from the local community, but the story centres a group of privileged teenage girls volunteering to look good on college applications and resenting another girl who has had her emotions techologically altered to make her better at crisis response. The sociopolitical ramifications of this migration are ignored, and the camp residents are nothing more than set dressing against which the story of these privileged teens unfolds, but the dynamics between the girls is fun to read and raises interesting questions about philanthropy and our motives for doing the right thing. (Also, not to go too hard on faint praise but both this and "Ceremonials" by Robert Levy were both surprisingly good stories about teenage girls coming from men.)

Elsewhere in the issue, we've got The Collection by Charlie Hughes, a chilling and suspenseful intergenerational horror where a set of stories centred around a church heralds the end of a long-incomplete ritual, and protagonist Layla has to make choices about how to take up this legacy. The main story is interspersed with police interview tapes, giving that satisfying "I know this ends badly, I just don't know exactly how" narrative feeling that works great with this kind of bleak horror. Pair it with The Monster I Found In Third Grade by James Sutter, later in the issue for a one-two horror punch. A solid issue. 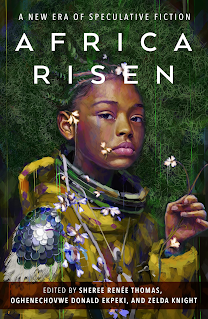 Africa Risen pulls together a massive 500 pages of original fiction from a range of established and rising star authors from both the African continent and the diaspora. 32 original stories is a lot to pull together for an anthology, and there were more ups and downs than I was expecting during the first half of the anthology, where a lot of stories end with the results of their climactic actions left uncertain and often with their protagonist's journeys feeling incomplete. I have complained before about stories that specifically end with the line "there was so much work to do", and there aren't any here that actually do that (unless I've blocked them from my memory), but going from the post-climate-catastrophe water prophecies of "Mami Wataworks" by Russell Nichols to the time travel technothriller of "Door Crashers" by Franka Zeph and into the intergenerational magic of "The Soul Would Have No Rainbow" by Yvette Lisa Ndlovu, I found myself getting pulled out of intriguing story worlds faster than I felt ready to leave them. I don't know whether any of the authors have longer stories to tell within these worlds, and if so I hope that this anthology provides the springboard for opportunities to do so - but as a reader it made for a bumpier ride than expected, one which I think a different story ordering would have mitigated.

Still, there's a lot of great stuff throughout, and the stories that left me unsatisfied mostly did so in a good way. I really liked Steven Barnes' "IRL", which sets out a future in which the reality and an online "game" world intertwine and people can be tried online for real-life crimes. When Shango, an extremely successful teenager gamer whose real life is falling apart, has his father targeted by a rival intent on taking him down, he has to confront the inequalities of the system and decide what actually matters to him. Continuing the theme of satisfying horror, "The Lady of the Yellow-Painted Library" by Tobi Ogundiran tells a suspenseful, claustrophobic story of a man whose lost library book turns out to be from no ordinary library, and "A Soul of Small Places" by Mame Bougouma Diene and Woppa Diallo is an outstanding monstrous coming-of-age about a girl (also called Woppa Diallo) who is sexually assaulted on her way to school and comes out of the experience with a taste for flesh that she uses to try and keep the other predators at bay. I also really enjoyed "Peeling Time (Deluxe Edition)" by Tlotlo Tsamaase, which takes on musical misogyny through the concept of a struggling music artist who gains the power to bring real women into his "dream videos". I love a good chapter heading conceit and the track titles on this fictional album really do it for me, as does the satisfying comeuppance of this asshole musician. 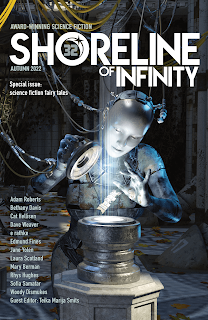 This is a special themed issue of Shoreline of Infinity, guest edited by Teika Bellamy and featuring science fiction fairy tales. We open with an Adam Roberts story which appears to be a woman, with no memory of herself or where she came from having a dialogue with a mysterious stranger about stories that involve bargains with the devil. Through the story, we learn more about the world she has come from and who, exactly, she is talking to, and it leads into an intriguing, Thousand Nights-esque bargain. Mary Berman's Cassandra Takes The Plunge features mermaids and an extreme detox from the modern world, as its protagonist "wins" a year in a submarine unplugged from modern conveniences in exchange for a significant (but not that significant) prize from a global megacorp on her return. After a fishing mishap leads to her meeting, and saving, said mermaid, Cassandra becomes enamoured and starts rethinking her life on the surface. Cassandra's adjustment to submarine life feels a little too easy, but her sense of helplessness at her situation, and the realisation that the only sense of agency she has is with her mermaid, are powerfully done.

Also worthy of note are A Good Morsel of Clay by Woody Dismukes, a myth about a mother and daughter whose job is to create worlds, and the lengthy reprint (so long that it's not even fully included in the print edition) of Fairy Tales for Robots by Sofia Samatar, which features a creator clandestinely telling an as yet unawakened robot the stories she thinks will be useful for its growth, interspersed with moments from her life. There's also a lovely Little Match Girl retelling, by Laura Scotland and a great three-paragraph flash piece, The Golden Circle Tour by Edmund Fines 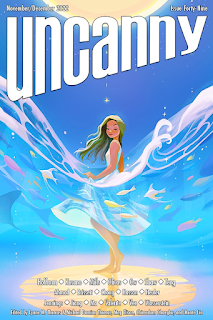 This issue of Uncanny features Rabbit Test, one of the buzziest stories I've seen in 2022 so far. It's picking up attention for good reason, as a topical take on reproductive justice and forced birth with a focus on a late 21st century future in the USA, presenting echoes of historical resonance through the ages. At the story's centre is Grace, a teenager who has grown up in an evangelical anti-choice family where technological surveillance of people with uteruses has been normalised. When Grace becomes pregnant, she tries to find a way to abort the pregnancy, and the story follows her through thirty years of attempts to live her own life and help others to live theirs, without the threat of forced birth hanging over them after every sexual encounter. By interspersing Grace's story with vignettes of others (mostly women, but with recognition of men and non-binary folk who face the same challenges, as well as the way that options have historically differed for white, Black and indigenous people in the USA), Mills presents reproductive freedom as a struggle that has always involved choices and where the battle is never definitively won. It's timely, given the repeal of Roe in the USA and the rollback of reproductive freedoms elsewhere, and very well crafted.

I also dug "can i offer you a nice egg in this trying time", by Iori Kusano: the meme title is fun (she says, as an egg averse person) but it overlays a really heartfelt story about Matt, a young man who keeps getting in violent fights with a Waffle House chef who makes his egg order wrong every time. Except, it's not about the eggs at all, it's about Matt trying to process the emotions that Gary evokes in him, and the grief of losing his life and status in the fantasy world of Hirekkyo, a world which he'll never be able to return to. It's impressive to write a compelling emotional epilogue to a main story  we've never seen, and the denoument between Matt and Gary does just that. The grief of "Earth Dragon, Turning" by Anya Ow is also beautifully realised, and  "The Other Side of Mictlan" by Matthew Olivas offers up even more grief with a side of magical underworld legacy and familial acceptance, with three brothers journeying to save their mother from the underworld while also trying to talk through their own differences. 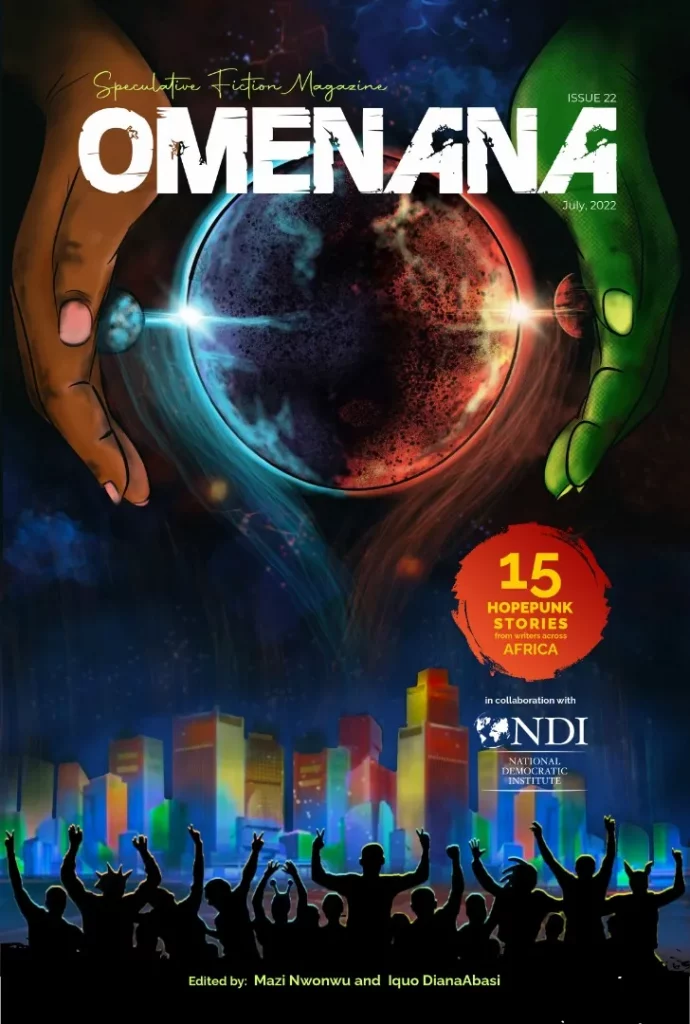 It's been a long time since my last column, and there are things I fully intended to review during that time which are now too fuzzy in my memory to dive into in depth. For now, the things I want to highlight from that list are a pair of issues from different magazines: Mithila Review Issue 16 and Omenana Magazine issue 22. The theme of both of these issues is Democracy - they are both part of the same project by the National Democratic Institute - and both present intriguing sets of possibilities about the future of the world. Interestingly, both issues  also hit on "hopepunk" as an overriding theme, and while there are a few stories, like Harefoot Express by paolo de costa in Mithila, that aren't particularly positive in their depictions of humanity, most of the time these are stories about people struggling to make the world a better place, even in the face of challenging odds. There are some rough edges here and there (Omenana in particular is run on very few resources, and sometimes it shows in the editing), but I really enjoyed both of these issues and what they represent, and I'd love to see more globally-minded publications taking this topic on.
POSTED BY: Adri Joy is a co-editor at Nerds of a Feather, Flock Together, an international politics nerd, a converted Londoner and a whippet owner, who would live her life submerged in the ocean with a waterproof e-reader - if she only had gills. Find her on Twitter @adrijjy or Mastodon @arifel@wandering.shop.
Posted by Adri Joy at 12:00:00 AM