The Chibnall era is over, but the Fugitive Doctor still has plenty of story to tell 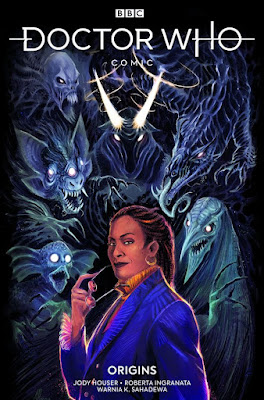 Love it or hate it, the Timeless Child is official. It's settled. It happened. So what now?

What comes now is a cornucopia of untold plot ripe for the plucking. Now that we know the Doctor has lived many more lives than we thought, the BBC's media divisions will be busy for the rest of the century filling in the gap to sate fans' newly sparked thirst for answers.

The first entry in this promising new continuity is Doctor Who Origins, a comic story starring Jo Martin's incarnation of the Fugitive Doctor, covering a period of her service in the secretive Time Lord agency known simply as Division. When she's assigned a job of questionable morality, she decides to dig a little further. What she discovers will be the first crack in her relationship with Time Lord society and the first roll of the snowball toward her eventual escape from Gallifrey with a stolen TARDIS.

The book opens with a brief scene that establishes what kind of person the Fugitive Doctor is. She stops by Earth to capture some minor band of intergalactic criminals, but during the mission she has her first encounter with humanity, and something in her resonates with what she sees. The book references the First Doctor's choice to settle in Earth with his granddaughter Susan, the implication being that this earlier incarnation's now-forgotten experiences left him with a lingering yearning for our world.

Here the Fugitive Doctor is written with a sharp tongue and a quick wit, as every Doctor should be, but her particular brand of unfazeable and knowing snark brings to mind the out-of-continuity Shalka Doctor more than any other incarnation. This is a type of heroine who can react fast enough to flee from a lethal giant spider while recognizing the ridiculousness of the situation, and just a day later teach a novice Division colleage to not impulsively obey every order.

What the Fugitive Doctor learns in this adventure foreshadows many of the traits that will define this character years later, when she stops being a tool of enforcement and becomes an irreverent hero. Her newly assigned partner is written to stand for the archetypal TARDIS companion, and her disagreements with her superiors are the first taste of the Gallifreyan political entanglements the Doctor will frequently provoke many centuries later.

This is a tricky writing assignment, to re-establish a character that has existed for half a century while showing a side of them that feels new and interesting, to give us a character who is already fully-formed but still doesn't know how much more she'll become. The Doctor Who franchise has usually been cautious in not closing too much of the open questions in the character's backstory (one of the main reasons why the Timeless Child plot was so heavily criticized), and this prequel-to-all-prequels succeeds at presenting a Doctor before the Doctor, before Susan, before Earth, before it was a commonplace occurrence to run for their life to save the universe.

Doctor Who Origins also shows another facet to the unbelievably corruptible government of Gallifrey, and throws yet another well-placed punch in their self-image of righteous guardians of secret knowledge. Here we find another difficulty, inherent to a multi-decade franchise involving hundreds of writers, that the book skillfully flies past: to shed enough light on what really pushed the First Doctor to abandon his people, while not revealing so much that readers lose interest and future writers can't make their own contributions.

Unfortunately, the need to leave enough questions unanswered hurts the pacing of the last pages. The Fugitive Doctor has had her first glimpse of what's not to like about the Time Lords, and... that's it. The cliffhanger is so abrupt you're tempted to read back and make sure you didn't miss some beat of the story. This is a satisfying read insofar as you want to get to know the Fugitive Doctor and close the book feeling hyped to learn more, but the sensation it leaves is that this must have been intended as just a prologue and not its own story. The character is undeniably compelling, and the arc is promising, but this first entry delivers a bit too little.

Penalties: −1 because the comic's ending is so sudden it doesn't actually end; it just stops.