A Mother trying to find her kidnapped son...but she is an interdimensional traveler, and her son’s kidnapper is a Dragon. 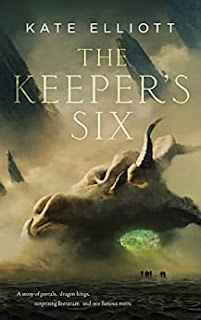 Bonuses: +1 For an enthralling mother-son story with strong characters and bonds.

Penalties: -1 A couple of pieces of worldbuilding not explained might have been welcome. Maybe.

---------
1. It should be noted that in the world of The Keeper’s Six, Earth is a *backwater*, a minor trading world at best. Earth governments do not know of the Beyond (something not true of more central worlds)
2. Although we don’t spend much time there, the Hawaiian location of the Keep made me want to visit Hawaii.
3. As I wrote this review, a political stunt regarding the transport of refugees comes very much to mind. Not that the treatment of refugees isn’t anything new, but it was particularly poignant for me that I read this book at the same time.
Posted by Paul Weimer at 10:30:00 PM