Davinia Evans’ Notorious Sorcerer features a would be sorcerer caught in a city on the cusp of magical change that he inexorably becomes the center of. 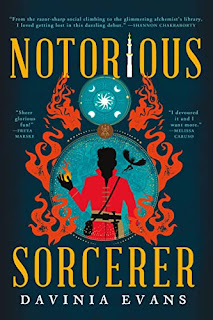 Siyon Velo is an alchemist. He’s not one of the sorcerers of the Summer Club, the high end of the magic world in the city of Bezim, really the only place in the known world where magic even works, and it is highly restricted and distrusted even so. Siyon delves into the other three realms of existence for alchemical reagents he can sell to the real sorcerers who can make true use of them. But when he does an impossible act that could qualify him for their ranks, it is also a signal that the balance of the planes themselves are under threat, Siyon is going to have to step up and in an impactful way to be the Sorcerer he always wanted to be.


This is the story of the titular and eponymous Notorious Sorcerer.


In Notorious Sorcerer, Evans provides us with, first and foremost from my perspective, a diverse, rich and interesting city with a culture, society, history and geography (in a number of axes). Bezim, the one city in the world where magic reliably works, a city riven by class and social division, is in itself a character on its own. From patrols of inquisitors sniffing out illegal use of magic, to the rooftop routes that the bravi (more on them shortly) use in their perambulations, the city feels alive, interesting and always something new around the corner. Entrepots like Bezim are full of activity and life, and there is a lot here that we don’t see, mainly because our primary titular character has tried to escape his life in Dockside. A particular recent touchstone for me in envisioning Bezim is the city of Nadežra from M.A. Carrick’s Rook and Rose series. Also, Maradaine from Marshall Ryan Maresca’s series also comes to mind, and, also recently, Erin Evans’ Empire of Exiles. We get to see the higher class areas of Bezim, the nobles (azatani) as well as well as the much more precarious hand by mouth existence that Siyon inhabits.


And yet there are blurrings and overlaps, even here, in the creation of the bravi, and they are, I think, one of the central creations in the book and deserve some separate discussion. They are sword-swinging street gangs, sure, but gang is perhaps not quite the right word for them, they are a type of voluntary association that appears to cross class lines--as one of our other main characters, Zagiri, is about to make her social debut as an azatani, and yet is a member of the Little Bracken bravi in good standing. Her older sister and her family have opinions about Zagiri’s time as a bravi, but the framing that the book goes with, and what I find interesting and compelling about the bravi and what marks them as as a creation of a different sort is that it is not “how could you associate with that gutter trash, I forbid it!” sort of reaction and more of “it’s time for you to put away childish things and be an adult” (she is eighteen) and time to be a true Azatani). And its made clear that Zagiri is hardly the only person in her social class in one of the tribles of the bravi. This gives the bravi a much more universal presence in the city and less of “The bravi are a plague that must be extirpated at all costs). (it does allow our meeting of the protagonists in the first chapter to help set up the social web for the rest of the book, mind). In any event the brawling colorful bravi are the social feature of the city and they are a wonderful creation.


Moving on from the bravi to the Azatani, we find the upper crust of the city, but it is not an overwhelming control of the city, either. The politics of the control of the city are very much from the top down and mostly out of the picture except as a force upon it, and even the Azatani wind up bowing to the inquisitors and the social forces that run the city. They have power to deflect some of what the inquisitors of the government can do, but that power is not overly large. The Summer Club does get harassed and even raided by the inquisitors, and with a swath of scions from the noble families there, they are helpless to stop it. It does draw into question how the politics of the city does run, but again, the inquisitors, mostly (Evans is careful to have a non viewpoint character who has tangled with Siyon before to keep the political personal and relatable) act against the bravi, the Azatani and the rest of the populace. If I do have a worldbuilding criticism of the book, is that I think some of this could have been a little better explicated, perhaps even with a point of view character to help round out the perspective a bit.


Speaking of points of view, the other major point of view we get in the book is Zagiri’s older sister, who IS a full Azatani and part of that society. Xxxxx is a character who clearly is written as counterpoint to Zagiri and yet also in harmony and resonance. Her sister may not have fully entered society, having not been married into another aristocratic family and doing the respectable business of her class, seeking to retain her freedom, but the novel quickly makes us discover that xxxx is also a character seeking freedom, having put away childish things, but feeling the strictures and restrictions of society and finding them not at all to her liking. While the main thrust of the book is Siyon’s quest, and it is a testament to the rich characters in the book that I’ve been discussing the sisters here in society much more than he to this point in this review, the quest for xxxxxx to find a place for herself, to recapture a bit of freedom and to do what she wants, is a theme that has a strong presence in the narrative.


I haven’t talked about the magic system much here, so a few words about it now. Given that Siyon is an outsider to “real sorcery”, his education, after his act of sorcery, allows us the reader to catch up and learn about magic as he gets his own crash course in the finer arts. Doing double duty, that education and Siyon’s research now only allows us the reader to better understand the setup, but the research itself, and what Siyon finds, eventually becomes very plot-relevant.


So, let’s go back to Siyon, then, since I’ve almost neglected our main character in this review thus far. He is from humble origins in Dockside, but part of the conceit and part of the narrative of the book is that he is very cagey about that past, and prefers himself to focus on the present, his attempts to live day by day, trying to save a little bit of money, to get himself ingratiated and into the society of the real practitioners of magic. It is delving into other planes for magical ingredients (and needing an anchor person) that brings him into contact with Zagiri, and it is saving her with an impossible sorcerous act that launches him into contact with xxxxx, with the Summer Club on a better footing than just the guy who gets alchemical ingredients for others, and the plots of the novel are off and running. Siyon is a reluctant hero, at best, he just wants to do what he can do to get ahead, and it is circumstance, choice and events that propel him forward to become the titular character, and get involved with the *real* problem with magic in the city.


One thing I did note though, in the discussion of Siyon, is that his background, his deep history does come up in the novel directly, but only at the end. In some ways, it reminds me, oddly, of the Octavia Butler novel Wild Seed, where a key fact about the character, a key piece of his background, only comes up on screen at the end of the book to help complete our view of him, and where he came from. The past that he left behind does finally come back to be confronted, just as he is ready to take a step into the future. I am not entirely sure it precisely works as intended, but I recognize the careful character development and the care that Evans puts into Siyon and his story here. Siyon provides us a slow burn and very touching queer romance in the book, as well. In point of fact, given his would be lover and his quest and his goals (which to say much would be more than a bit spoilery of major events in the plot), it is a bit of a heartbreaking romance as well. I am glad that, given how things stand at the end of this book, that this IS the first book in the series, because that is an unresolved thread that I do want to see more of,


And that is part of the magic, in the end, of the story of Notorious Sorcerer. Yes, its ostensibly a story about a magical disaster waiting in the wings, trouble that might have been accelerated, or at least put a spotlight on, by Siyon’s impossible act of magic that makes him that Notorious Sorcerer. Even through this existential threat, however, it is his drive and his personal story, the story of his relationship, the struggles he undergoes, that really brought me as a reader to turn the pages on the novel. And to bring the sisters back again, the aristocratic counterpoints, their struggles to do what they want, being restricted by society and custom, it is compelling work that Evans has put into the characters and onto the page for the readers. While I do want to know more about a lot of how the city works, the focus on the characters kept my eye and thoughts, as I was reading the book, firmly where the writer wanted me to focus.


Now that is sorcery, and no mistake.

Bonuses: +1 for a diverse (on all axes) and inclusive, and interesting world and canvas, including the magic.

+1 for very strong notes of character development and focus on a set of characters to intensely follow and feel for.

Penalties: -1  Some of the worldbuilding and the design decisions are not crafted with the same loving care as some of the others, or the aforementioned strong web of  relationships,