Microreview [book]: Daughters of the Storm by Kim Wilkins

Daughters of the Storm is an epic fantasy that centres women and allows them the space to be flawed. 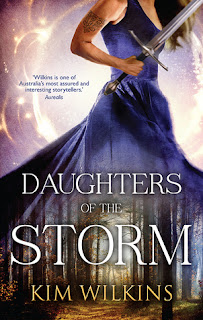 Australia has a long history of female authors of fantasy; we've been known to look confused when claims are made that there hasn't been women writing fantasy until recently. One of the reasons for this is Sara Douglass. A pioneer of Australian fantasy, she beat George R.R. Martin to the punch, with her debut novel Battleaxe released a year before A Song of Ice and Fire. Her epic fantasies were an international success at a time when breaking into the US market was all but unheard of. To quote the Aurealis Awards:

Sara Douglass was the flagship author of the HarperVoyager Australian line, which launched the careers of many of our most popular writers, and paved the way for the vibrant and diverse speculative fiction scene Australia has today. Sara’s contribution to the state of speculative fiction in Australia cannot be underestimated...

After she died in 2011, and with permission from her estate, the Sara Douglass Book Series Award was established in conjunction with the Aurealis Awards. The inaugural award was presented in 2016 and is given only once every three years.

The 2021 award was presented earlier this year to Kim Wilkins for the Blood and Gold series. The first book in the series is Daughters of the Storm, and is a fitting successor to Sara Douglass.

When the king of Thyrsland falls into a coma, his five daughters gather at his side to investigate the cause and determine the fate of the kingdom. This is a character-driven epic fantasy told in close third person. I actually tripped over the perspective in the prologue because at first it seemed to me to be coming from the king. It turned out to actually be coming from his wife, the step-mother of the five princesses. This seemed to me to be pretty appropriate for the book, which centres women in a traditionally male-dominated genre.

It's a story that tends somewhat towards the grimdark. Each of the daughters has a very distinct character with definite flaws. While I tend to prefer my characters to be more likeable, I appreciated that they were given the space to be unlikeable and in a variety of ways. With so many female characters present, there's no danger of them needing to be the sole representative (or one of very few) of their gender; they get to be well-rounded people.

Bluebell is the eldest daughter and heir apparent. She's the sister most likely to be voted the Strong Female Protagonist: a fearsome warrior and commander, rumoured to be unkillable, and deeply devoted to her father. However, she's not much of a people person (even if she has her moments), coming across as a bit of a bully, and not always the brightest of sparks.

I admit it took me a bit to adjust to Bluebell as a warrior's name. In addition to undermining expected masculine norms, I suspect there's an aspect of playing with the Victorian language of flowers. According to Jessica Roux in Floriography, bluebells represent humility and faithfulness. While Bluebell is very faithful to her father (at least so far), humility is not exactly one of her key traits.

Likewise, rose represents love. As the second of the sisters, and perhaps the most beautiful, Rose was married off to the ruler of the neighbouring kingdom. Her affair with the king's nephew threatens to jeopardise an already fragile peace. While her desire to follow her heart is most certainly sympathetic to a modern audience -- along with her desire to be treated as more than just a womb -- her tendency to want what she can't have casts a shadow over her love.

I found Ash to be perhaps the most sympathetic of the sisters. In training as a counsellor of the common faith, she finds her gifts of magic and precognisence stronger than the order finds acceptable... and growing stronger daily. When she receives a mental message from Bluebell regarding the state of their father, she flees for home, haunted by a premonition of her own death. Even as she slowly embraces her powers, her priorities remain muddled, torn between loyalties.

The twins Ivy and Willow are rather younger than their siblings. Ivy is thoroughly spoiled and boy-crazy, quickly developing a crush on Heath, Rose's secret paramour. Willow has much more backbone, tending to take after her sister Bluebell. However, she's a convert to the foreign Trimartyr religion and views her sisters as heathens, encouraged by the voices of the angels she apparently hears. This analogue of Christianity is not portrayed in a particularly flattering light... but perhaps no worse than any of the other religions at play in the world.

For the most part, the story alternates between the perspectives of the sisters. However, we do get a token male perspective from Wylm, their step-brother. This perspective is necessary because he functions as an antagonist, and one who is often deceitful and acting alone. Thus we are able to see the true extent of his cowardice.

With so many threads to juggle, the pacing can be a bit slow in places. This is particularly the case towards the middle.

The setting seems heavily inspired by Viking-age England. There are small, feuding kingdoms plagued by raiders from the sea. A new, patriarchal religion is rising up against the old, more nature-focused warrior gods. Magic is part of the world view, which accepts (to varying degrees) the existence of elemental spirits and that a brain fever may instead be the effects of elf-shot. It even manifests in the language, where there are no bedrooms, only bowers.

As might be expected, given the genre, the story comes with some content warnings, including violence, sexual assault, and human and animal death.

While it's most definitely not my cup of tea, I nevertheless felt it was doing some interesting things and well deserving of the award it received.

Bonuses: +1 for the variety of female characters, +1 for balancing flaws with understandable motivations