The Wheel of Time Reread: The Dragon Reborn

I’d like to welcome you back, dear readers, to The Wheel of Time Re-read. Today we’re going to talk about The Dragon Reborn. We are still in the heady early part of the series where Robert Jordan’s storytelling is firing on all cylinders and if you want some big budget 1990’s epic fantasy - this is it, y’all.

The Dragon Reborn is the third volume of The Wheel of Time and we’re charging headlong into some sort of acknowledgement that Rand is, in fact, the titular Dragon Reborn. Rand has twice now faced Ba’alzamon (and twice assumed that he has defeated the Dark One) but the battle against the darkness has only just begun (or, never ended if you pay attention to what Ba’alzamon says). There are any number of prophecies that need to be fulfilled for Rand to be proclaimed and acknowledged as the Dragon Reborn and one of the more significant ones is that the Stone of Tear must fall (be captured) and before that happens, that Callandor (“the sword that is not a sword”) is held by the Dragon. It’s a seemingly contradictory prophecy because Callandor is the greatest treasure of the Stone and how does one get so deep into the Stone to claim the sword without having first captured the fortress. That’s one question The Dragon Reborn (the novel) will answer.

But first, Rand (and everyone else) needs to get there.

Let’s find out how. 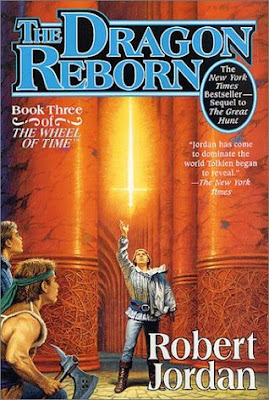 I wish I could remember every prologue in the series so I could figure out just where The Dragon Reborn’s prologue ranks, but I can’t, so I’m just going to assume it’s pretty low. This is the Ordeith prologue, the new incarnation of Padan Fan who has now wormed (his name means Wormwood in the Old Tongue) his way into being an advisor of Pedron Niall, the Lord Captain Commander of the Whitecloaks.

If you’re thinking this sounds a bit like Grima Wormwood in Lord of the Rings, you’d be right. It does. Ordeith is a poison. Similar to Mordeth at Aridhol / Shadar Logoth, Ordeith is going to further rot the Whitecloaks from within, twisting their plans. Pedron Niall does not appear to be a Darkfriend, but it’s not going to matter when the evil that Ordeith exudes takes hold. That’s it for Ordeith in this novel, it’s more of a set up after Fain escaped from Fal Dara in The Great Hunt than it is something that directly comes to play in this novel.

Despite the title of the book, The Dragon Reborn is not really Rand’s novel. We spend far more time in Tar Valon with Egwene, Nyneave, Elayne, and Mat and then on the road towards Tear with those same characters (though Mat is mostly riding with Thom Merrilin, initially to deliver a letter on behalf of Elayne and later in a hope to rescue Team Super Friends).

Early on, Rand is *very* isolated. He meets with and frequently yells at Moiraine and also has absolutely no control over his power. Unless Egwene, Rand has nobody to teach him how to use saidin. What’s the quote from Moiraine? Easier for a fish to teach a bird how to swim? He’s on his own with a destiny he does not want, with a power he can’t control and sometimes can’t even reach and has no idea what’s going to happen even if he can - even in the midst of a trolloc attack. It’s bad, though we mostly see this from Perrin’s perspective before Rand runs off for Tear by himself with Moiraine / Perrin / Lan / Loial in chase.

I don’t remember how I felt about Rand in my first read-through, but he’s not a lot of fun to read this time. He’s important, but his chapters are tedious. He’s suffering, terrified, driven, and struggling. I wish I could say that this is the last time that Rand will be a deeply unpleasant protagonist in this series, but this is only the beginning and there is a lot of breaking Rand down to go. 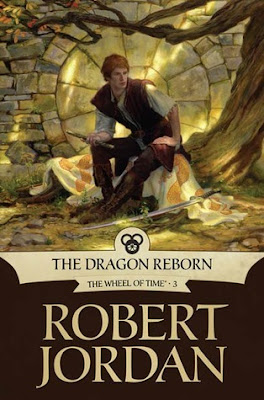 The good thing, though, is that this isn’t his story except for at the beginning and the ending. Rand is the table setting that isn’t doing it for me right now. But once the story got moving, I was there. I love Egwene / Nynaeve / Elaye in the White Tower - I think tower politics is always a favorite for me (bring on Knife of Dreams!) - but a crowning moment of awesomeness is Mat vs Gawyn / Galad with the quarterstaff, though it is tempered by Mat being a bit of a dick. But most of my favorite bits are generally tied to Egwene and Mat’s respective storylines.

What’s interesting to me is how much Mat comes into his own in this book. Once he’s healed and he’s not as ravenous or having fever dreams, he really starts to take control of how he interacts with the world. He’s a much more assured character in the back half of the novel.

The Amyrlin gave an exasperated sigh. "You remind me of my uncle Huan. No one could ever pin him down. He liked to gamble, too, and he'd much rather have fun than work. He died pulling children out of a burning house. He wouldn't stop going back as long as there was one left inside. Are you like him, Mat? Will you be there when the flames are high?

He could not meet her eyes. He studied his fingers as they plucked irritably at his blanket. "I'm no hero. I do what I have to do, but I am no hero."

This is a moment of Siuan Sanche talking about her uncle, but she also pegs Mat perfectly. This is touched on multiple times in The Dragon Reborn, when Mat rescues Aludra from the Illuminators, when Mat goes after the Super Girls, even when Mat throws food over the side of the boat to help feed hungry people - but it gets into the core of who is he and who he becomes, much as he will deny it time and again.

There is a point in The Dragon Reborn where everyone starts rushing headlong to Tear: Super Girls chasing the Black Ajah at the behest (or at least with the permission) of the Amyrlin to Tear, possibly led on by Lanfear, but they’re hoping to spring the trap. Rand because that’s where he knows he needs to be in order to claim Callandor and more officially proclaim himself. Moiraine to follow Rand because it’s not time to let him off the leash even if the least was ineffective and chafing. After delivering Elayne’s letter to her mother Morgase and discovering that Morgase’s lover has a plot to harm Elayne, Mat and Thom follow the Super Girls. Perrin is with Moiraine.

As we run into the conclusion of the novel I *think* this is the last time that anyone thinks they actually killed the Dark One and as such should be the end of someone claiming “shai’tan is dead” and having the world lurch while Moiraine yells at them.

To that point, Moiraine is a much more prickly character than I remember. I suppose few Aes Sedai actually explain everything, but her basic attitude is to tell people to do the thing because the thing needs doing but don’t tell anyone and then get frustrated when folk just don’t understand her rightness and wisdom. The show is like that, too. 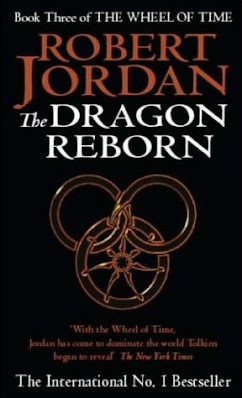 *Egwene, Nynaeve, and Elayne meet Aviendha, which begins the relationship Egwene will have with the Aiel - another future favorite storyline of mine when Egwene is in the Three-Fold Land. Right now Aviendha is just a new character introduced, but she’ll be much more.

*Egwene’s “Dreams” mirror Min’s visions regarding Perrin with the falcon and hawk, Mat’s putting his eye on the balance scale, Mat and the Seanchan (Tuon!)

*The introduction of Faile was not as quite as annoying as I remember, but I think what gets missed (often by me) is how young Faile is and also how young Perrin is. For large parts of the series I think they’re mid 20’s at the youngest, but really they’re still teenagers and that’s really rough. They’re acting like it here.

*Speaking of Perrin, a scene of incredible poignancy is Perrin working in the blacksmith’s shop.

*”If you see the most beautiful woman you’ve ever met, run” - I’ve always associated this with Berelain and all the trouble she causes Perrin, but I think I’ve been wrong for a really long time. It’s Lanfear, isn’t it?

*Balefire is talked about, and then eventually used. Moiraine talks about how she could be stilled for even knowing about it, let alone casting it. She balefires Be’lal (Forsaken) and Darkhounds. Nynaeve balefires Myddraal. Ishamael tries to balefire Rand, but he blocks it.

*There is a stereotype of Nyneave tugging her braid and while it occurred in the first two books, this is where it becomes noticeable and somewhat cliche.

Next up, The Shadow Rising, which possibly my favorite book in the entire series. Plus, the truth about the Aiel, a game-changing coup (aren't they all?), a Forsaken in Hiding, and Nynaeve’s moment of crowning awesomeness.


Previous Re-reads
The Eye of the World
The Great Hunt