An underrated, insightful gem of a show that will undo your emotions in the best way. 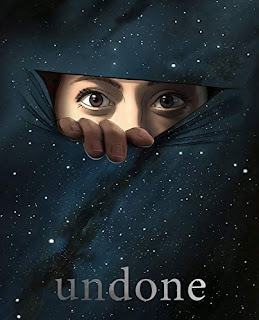 The plot device that probably comes to many people's minds when thinking of ambiguity in fiction is whether fantastical happenings are truly fantasy or whether it's a figment in a mentally ill character's imagination. Almost always, it's a lazy plot device. It skirts answers, solidity, and finality in favor of cheap shock and a shallow veneer of intellectualism. Ambiguity works best if each interpretation elevates the story, not muddies it. Undone understands this more than almost anything I've seen. It’s a show that digs deep into the dilemmas of time travel and struggles of mental illness through character development and a clear emotional through line.

Alma (Rosa Salazar) doesn’t have the perfect life. She’s struck by ennui, her father died under mysterious circumstances, and she doesn’t always have the greatest relationship with the rest of her family. Then, she almost dies in a car crash, and develops an ability to move through time. With her newfound power, she’s set on a mission to find out more about her father and his questionable demise. Mental illness, familial relationships, as well as romantic ones are explored in an ambitious tapestry.

Animation has so much potential to transcend the limitations of live action and go for broke through its imagery and creativity. Undone does such a thing, making the most of its medium, through creative transitions, like when a disparate setting collapses into another without being jarring, or an abundance of flashy visuals that could be overwhelming in another medium. The animation style is Rotoscope in which animators trace over live action visuals to deliver more "realistic" performances. That is never more clear than in the facial expressions. Lifelike looks of distress, joy, and anger are conveyed subtlety from a quirked mouth or a glint in an eye. And it never veered into uncanny valley territory for me.

One complaint I have for the show is that the midsection of Undone’s first season can be repetitive as Alma is learning her powers. While I don't think a training montage would be appropriate, I think a classier variant could be devised to speed things along a little more. However, the latter part of season 1 and the entirety of season 2 are a burst of momentum and creativity. Plot lines contort until they're as twisty as can be while still being comprehensible, while the social dynamics that were quietly built in the early stretch of the show pop off with satisfying explosiveness.

Undone isn't empty ambiguity. Its exploration of mental illness lays the foundation for its realistic story beats, while its time traveling exploits decorate it with vibrant imagination. While it offers two interpretations for what's going on, the ambiguity doesn't undercut one interpretation over another. Rather, the journey the show goes through uses its more imaginative sections to give more insight to its realistic interpretation and vice versa. Whichever interpretation you choose will be informed and enhanced by the entirety of what you watched, not just some of it. And what a rewarding experience it is.

Positives: +1 for a brilliantly executed animation style.
+1 for heart-wrenching explorations of intergenerational trauma and mental illness.
Negatives: -1 for a couple repetitive episodes
Nerd Coefficient: 9/10
POSTED BY: Sean Dowie - Screenwriter, editor, lover of all books that make him nod his head and say, "Neat!”
Posted by Sean D at 12:00:00 AM