This month's short fiction includes an anthology issue from a regular column favourite, plus two new-to-the-column publications:  Shoreline of Infinity and Khōréō. No preamble this month, let's just dive right in! 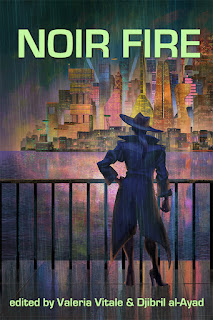 The Future Fire's regular quarterly issue from April - June has been replaced by this full length anthology, featuring 14 stories of speculative noir fiction plus an introduction from the editors and an afterword by author Fabio Fernandes. Five of these stories are original, and can be read for free on The Future Fire website in place of the quarterly issue; the rest are reprints, including older stories from TFF itself.

What's great about this anthology is how wide-ranging it manages to be while also maintaining a thread of "yes, this feels like noir" throughout. This is, I believe, nothing short of sorcery, and I'm not enough of a noir afficionado to unravel the threads that keep this set of stories coherent (side note: we had Valeria and Djibril over to talk about speculative noir in an interview last year [http://www.nerds-feather.com/2021/12/speculative-noir-with-valeria-vitale.html] if you're interested in hearing some actual experts talk about the genre as a whole!) but the result is a really effective book which gives you plenty of reasons to keep reading. What is notable is how many stories - not all, but enough to feel like a theme - subvert the individualism and misanthropy of "classic" noir protagonists and substitute it with characters who genuinely care about other people, particularly those at the heart of the mysteries they are solving. Those relationships often serve to highlight the overall bleakness of the stories, even when there's an note of sweetness within the loss. For stories which stick to a more familiar bleak-cyberpunk-mystery aesthetic, it's the relationships that make the stories feel fresh. For example, in "I Will Make You Remember Me" by H. Pueyo (original Portuguese publication Revista Trasgo 2019, translated in Nat. Brut 2020), where investigator Sebastián tries to track down a missing woman, while also beginning a relationship with his mysterious client, the trope of the hard-as-nails detective is made complex by the genuine trauma its investigator struggles with, as an ex-cop who has refused to allow his memories of a prior incident be downloaded from him. "Terminal City", by Zoe Blade (reprinted from The Future Fire 2013), begins with its protagonist finding the body of her co-worker and pursues the mystery of his death, and his final work, against the backdrop of bleak underground tower block; it combines its fast-paced corporate hellscape narrative with moments of grief and connection between its protagonist and their friend, as they seek to make the death they've encountered worthwhile.

Travelling further out on the continuum of weird, we encounter "We Are All Wasteland on the Inside" by Benjanun Sridaungkaew (reprinted from TFF 2016), featuring old spies trying to understand a mysterious curse which is causing one of them to literally fall apart. It's slow and bleak and full of all the weird, dramatic imagery you'd expect from a Sridaungkaew story, set against the backdrop of Bangkok. "A Prayer to St Jude" by M. Bennardo brings a compellingly spooky seaside town gothic aesthetic, with its protagonist, Madame Cassie, working as a fortune teller with a specialism in "finding" lost objects even as she runs from a mysterious figure from her own past. Then there's the noir-meets-katabasis undertaking that is "The Bone Children and the Darkness" by Lorraine Wilson (Stalking Leviathan 2016), in which a village, led by a blind oracle, send an expedition to seek out lost children who have been taken into a mysterious darkness. How does this quest story work as part of a noir anthology? I don't know how to explain it, but it totally does.

Finally, a word about perhaps my favourite story in the anthology: "The Stars, Their Faces Uplifted in Song" by M.L. Clark, about an AI detective sent to unravel a mystery where almost an entire monastery has been mysteriously murdered, leaving just one survivor. Complicating matters is the fact that on this world, Cog, people believe that the universe will cease to exist if the monks of this monastery stop singing, and with that burden now falling on one monk who can't pause for long enough to explain what he witnessed, figuring out the mystery is going to be a tall order. Combined with that mystery, Clark also mixes in the scepticism of the protagonist: this is a spacefaring civilisation, full of people who know that the universe is much older than the song has been sung for, and yet their belief remains powerful regardless; and the social implications of a male-only monastery and the status of the women who work there. It's a fantastic piece of worldbuilding in and of itself, but the sceptical protagonist and the gender elements also hold up a funhouse mirror to some of the more tired tropes of noir, putting them in a setting where they're recognisable while the story does its own thing. Overall, this is an anthology that's well worth your time. 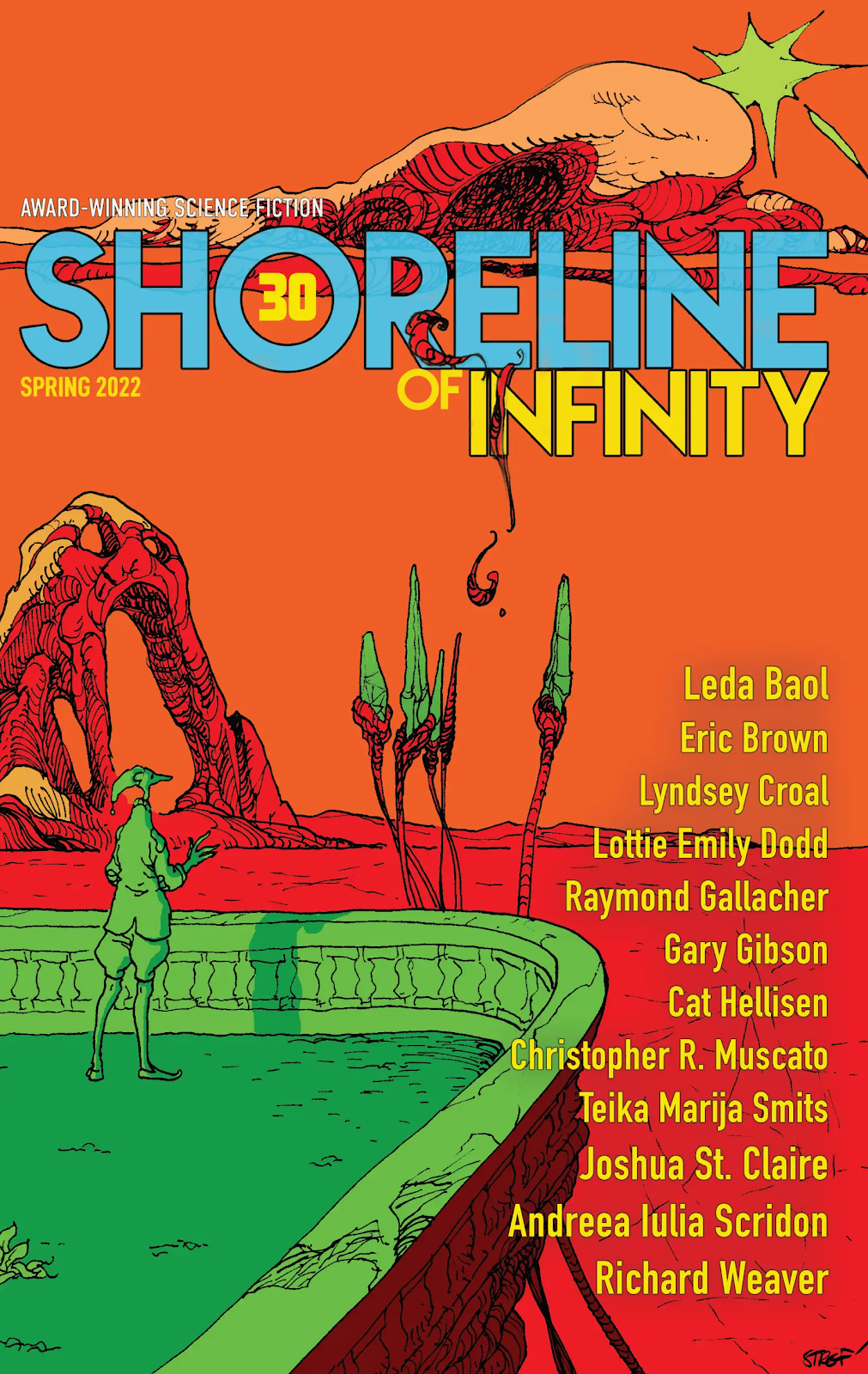 Shoreline of Infinity is my first experiment with a literary magazine that actually shows up on my doorstep, delivered by the postman, in physical artefact form. I don't get paid enough to start musing on the ins and outs of physical vs. digital publishing, but it is nice to hold paper sometimes, especially when there are pictures, and the novelty of that experience carried me through the content I was less impressed with - namely the serial, "Approaching Human" by Eric Brown, an 50s-style "AI Noir" which doesn't hold up well against anything I just discussed above. That aside, there's some really cool stuff here too, like Lyndsey Croal's The Last Call of the Deep, a flash piece which follows a lonely whale travelling a lifeless ocean changed by rising sea levels and their effect on humans, and Raymond W. Gallacher's The Keep, an atmospheric post-apocalyptic survival story centred around a man living in an ancient, mysterious building. Minotaur/Mindtour melds together myth and spacefaring science fiction in a story about a deceptively simple labyrinth in order to dethrone a corrupt king: its challengers (all given a Theseus designation) enter what looks like an empty dome with a leather bull head at its centre, but almost all of them die within moments of entering. It's up to Theseus Three - who turns out to be the Theseus - to withstand the mental challenges of the labyrinth and to defeat the "minotaur" at its centre. The genre mashup works great, and the ending took me by surprise, bringing home the implications of living out a repeating myth in a way that really packs a punch.

Also of note here are two winners from the Solarpunk Storytelling Showcase, created by Extinction Rebellion and highlight stories which imagine positive, post climate emergency futures. The two flash length pieces here both put the natural world front and centre in their protagonists' coming of age, putting us in the shoes of young people who have only lived in a solarpunk world, even as they know the stories  The Tides Rolled In, by Christopher R. Muscato, isn't so much a narrative as a setting-in-action, as we follow Afton, a girl living on a sustainable floating village which is about to dock with a much larger settlement. Through Afton's eyes, we see the technology that supports her home in action, and it's accompanied by a detailed architectural drawing of the ship by Dustin Jacobus, an industrial design engineer. The second solarpunk story here is The Singer of Seeds, by Leda Baol, which features a coming of age ritual in which children are given a seed, with the kind of plant they get holding significance for their future. It's a cute story, and like The Tides Rolled In, it uses its premise to talk about the significance of the seeds, and of how biodiversity has been protected in this world and the people responsible for it. 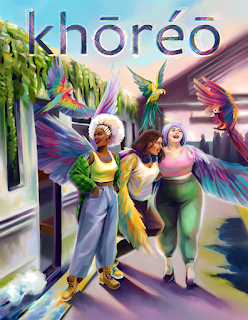 Khōréō is a quarterly publication of immigrant and diaspora fiction, and this issue is the first of their second year. Khōréō has come recommended and checking out this issue, its not hard to see why. Highlights from the five stories here include "Me and Seed Sheself" by Celeste Rita Baker, about two entities, encased in a tamarind seed, who hitch a ride with a young girl and stay with her as she grows up, until her growth into womanhood comes into conflict with the interests of her seed-spirit friends. There's a lot of concepts and strangeness packed into a relatively short length here, making this a story that really benefits from rereading and taking more of the concepts in.

Also worthy of note here is "Matchmaker, Matchmaker" by Evalyn Broderick. This is a story about two Jewish women interviewing for marriage to an eligible young man who has come from another planet to meet them, but while both Esther and her friend Chaviva feel constrained by tradition which insists that men must travel to them in order to marry, what they really want is to be able to stay together. The resulting story deals with a queer awakening within a traditional context that is presented as very heteronormative, but where adapting that tradition doesn't mean confronting bigotry - it just means taking an option that you didn't realise was available.