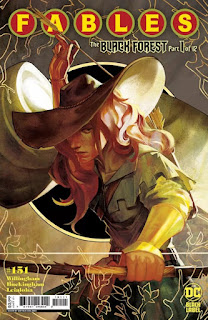 Way back in 2002 Vertigo launched Fables, a series from Bill Willingham that was built on the premise that the famous characters from our favorite fairy tales were living in the human world after having to escape their homelands.  It was an interesting premise, had numerous spin off series, spanned 150 issues, and won fourteen Eisner awards.  After a seven year hiatus, Fables returned last month and picked up where the long running series ended.

Fables is a series that helped bring me back into comics when I was in my anti-superhero phase and the main series holds a place near and dear to me. Having the good fortune of living in Austin at the time, the creators frequented Austin Books and Comics and I was able to attend a small Fables convention, meet the creators, and really immerse myself in the community that embraced this series.  While not all of the spin-offs were as good as the original, I quite enjoyed Peter and Max which was set in the Fables universe.

Fables has graduated from Vertigo to the DC Black label and is a 12 issue story called "The Black Forest".  After seven years, I needed a refresher as this series really does pick up right after issue 150. The new series centers around Bigby (the big bad wolf who is a human in this world as are all Fables), Snow White, and their cubs along with the introduction of a new villain.

It oddly felt extremely familiar and easy to find myself back in the Fables universe and it is clear that Willingham and Mark Buckingham would not have returned to this series if they didn't feel like it would be up to the same standards. The new issue has me excited about this series for the first time after my failed attempt to get my son on board with it.  We can save that story for another time.  Without spoiling anything, I should add that Fables immortality is built on the strength and popularity of their story.  Something to keep in mind when you reach the first twist at the end of this issue.

While I don't think I would be up for another 150 issues, because in all honestly there were some arcs that didn't capture my interest, if the other eleven issues are as good as this one I would not be sad to see another story outside of the Black Forest.