The beginning of the Demon Princes Quintet, now in audiobook edition for the first time 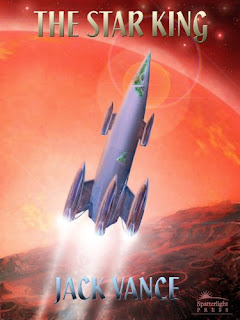 Revenge and paying back a great wrong is a story in fiction that goes back at least to the Trojan War and Homer and probably a lot further, too. The methodical plotting out for revenge, a campaign against a group of people who have harmed someone is probably older than Dumas, but The Count of Monte Cristo is a solid enough template and example.

The Star King by Jack Vance follows that well worn template in setting up the Demon Prrinces Quintet. The premise of the series is a classic tale. A frontier planet, quiet and bucolic, is attacked and the inhabitants killed or enslaved. A few survivors try and rebuild their lives. Kirth Gersen, just a boy, survives, along with his grandfather, who trains and teaches and inculcates his son to try and find out who perpetuated this violence, this crime, and to learn the skills he needs to find the perpetrators, and take vengeance for what has happened to his family and the entire colony of Mount Pleasant in the bargain.

Although Gersen has gotten a lead in actually getting the names of the Demon Princes, it is seemingly by accident that he stumbles onto the trail of the Demon King in this book, Malagate the Woe, thanks to a chance meeting with an explorer with a prize of the location of a virgin planet. Gersen soon learns that the explorer’s sponsor is in fact Malagate, and so the plot of the novel is Gersen’s attempt to get close to, and deal with Malagate¹.

Also in this novel is partially set the pattern of how the Demon Princes operate (anonymous interstellar crime lords with unusual habits)  and Gersen’s determination to reach and end them. Their unusual habits and desires are the hook that Gersen can use to find them, and reach them, and Gersen’s monomaniacal desire to fulfill his promise to his grandfather to deal with the Demon Princes. We are also introduced to The Rigel Concourse, a hub of Oikoumene civilization, and a raft of concepts about how this part of Vance’s future history works.

I had not remembered in a long ago read of the novel, but it comes through here clearly and firmly, that the pattern of this novel is a mystery and a novel of deduction. Gersen runs down leads to figure out who Malagate must be, but is stymied in that Malagate is not only one of three individuals, but (unlike all of the subsequent Demon Princes) is not even human, but of the titular Star King race, an amphibious race that has become more human than human in order to outcompete them². Gersen soon figures out that Malagate, hiding his identity (as do all of the subsequent Demon Princes) is one of three individuals, but not which one. This novel becomes a cat and mouse game for Gersen to try and deduce which of the men must be Malagate. Vance plays fair with the information given the reader and although I already had remembered which of the men is Malagate, I admired how he had left down the clues so that when Gersen announces who he is and why, the pieces, like a good mystery novel, were there all along for the reader to guess.

There is also honestly a bit of an early James Bond feel to this novel too. Gersen is not a member of the IPCC, the fraternal organization of law enforcement that has affiliates across human space, but he sure acts like an agent (he gets mistaken for law enforcement at several points). He is skillful, intelligent, uses gadgets and tricks and well laid plans, and foils others in a way that James Bond of the Connery/Moore school will recognize right away. Vance never goes deep into the weeds on his technology and how they work (just like most Bonds don’t care about the details of what Q gives him, just that they work).  In addition, this novel has an outright “Bond Girl”, Pallas Athwode. I was disappointed but not surprised (given the times) that she becomes a Damsel in Distress, but thankfully I can reassure readers she does not in the end become Fridged. (Pallas does not appear in subsequent novels, either, reinforcing the Bond Girl sort of feel to her character). The enemies Gersen faces here, particularly “Beauty”  Dace, one of the Star King’s lieutenants, and of course the Star King himself, also feel like enemies right out of a Bond novel with weird habits and quirks.  Although Poul Anderson’s Flandry novels are also very Bond in Space, in some ways Vance gets some more of the *flair* in Bond stories in a more effective mode than Anderson manages. Anderson’s stories are grim “fight against the dying of the light”. Gersen is the Determinator, but he is not grim about it (his dalliance with Pallas a perfect example of that).

And the world. This novel is early in Vance’s career in novels, and so this novel lays down the outlines of what this part of his timeline and verse are like. The aforementioned IPCC, the very loose structure of the Oikoumene interstellar human civilization, the Rigel Concourse, a heart of that civilization, and much more are laid down here for the first time.  I didn’t make the connection back when I first read this, but there is even a mention of the planet Sirene, which would later be the setting of one of Vance’s best stories, “The Moon Moth”.

Given the prose of the novel, Vance’s effortless worldbuilding just fills the ear and the mind with the world that Vance created here and built in subsequent novels. I had remembered the strange, horrific appearance of Dace, but I had forgotten that in Vance’s future, people change skin colors and tones at the drop of a hat, for fashion, for whim, to please a potential lover. As mentioned above, the technology is timeless and not well described. The technology is just means to an end to explore strange worlds and strange human societies.

Sure there are footnotes³ (which may turn off some, but in  those footnotes and chapter beginnings there are some discursions (including the first Scroll from the Ninth Dimension feature story within the story) that allow for Vance to “go deeper” and “infodump” a bit), but overall, the novel just flows onto the page.  And given that this was the audio version, it flows right into the ear with this audio edition, narrated by Stefan Rudnicki. His narration made the audio version and the audio return for me to the Oikoumene a true pleasure.

What dates the book, though is no mention of queerness anywhere in the novel. For all of Vance’s inventive worldbuilding and imagination of the varieties of human experience, I can’t recall any Vance characters being gay or bisexual until the Lyonesse books, decades after this one. What is more, the aforementioned Pallas is really the only female character in the novel with any speaking lines, and Vance’s female characters almost always fall into a few archetypes. While later novels in the Demon Princes (and in general for Vance) do better, I used the phrase “Bond Girl” above quite deliberately. Vance did eventually work toward doing better, but he doesn’t do that well here, and that has to be marked against him. For all I really enjoyed returning to Vance’s verse, younger me didn’t see these issues and problems, but I, now, inescapably do.

The other Demon Princes novels are going to be re-released in audio, and I look forward to revisiting them and seeing how they hold up and what pleasures they have in store.

¹ One of the joys of Vance's work are the names. They aren't common names to our language, often invented, but they feel and sound plausible, and are most distinctive. Kirth Gersen. Pallas Athwode. Malagate the Woe. Smade's Planet. Teehalt.

²It is telling that the only starfaring intelligent aliens, the Star Kings, are more human than human. For Vance, humans ARE the aliens.

³What would a review of a novel of Jack Vance be without footnotes itself, hmm?

+1 for an introduction to his vivid and amazing Oikoumene verse

Penalties: -2 Some of the social aspects of the novel, especially in regards to female and non heteronormative characters, have not aged quite as well.