Lightyear doesn't fly, but it falls with style 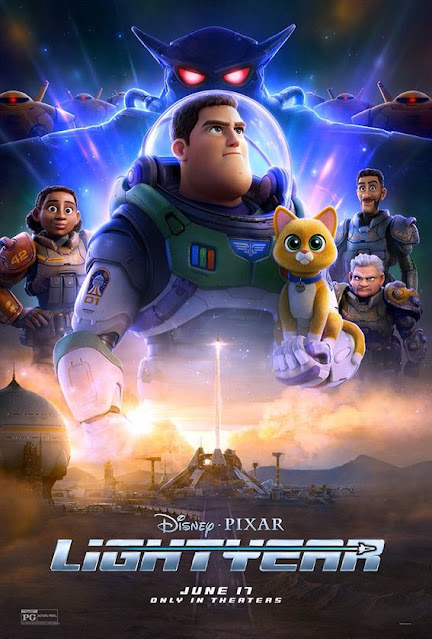 Now picture yourself when you next met Buzz. It was 1999. The excitement was still fresh, the story was solid, the twists were earned, the magic was still there. You loved it.

Then came the moment to say goodbye to Buzz. It was 2010. By then, you were more mature, and so was the plot, and there were tears, and hard moments, but you learned a form of bittersweet joy you didn't know you needed, and in the end, you felt lucky to have lived through an era of cultural history.

And yet, somehow, Buzz returned. It was 2019. You weren't sure what more these characters could teach you, but, surprisingly, these symbols of abandoned fantasies pulled off a moving argument for the inexhaustible power to create new fantasies with the tools at hand. You were glad to have had a last chance at reunion.

At each of these reappearances, you were a different person. Buzz was the same, because plastic is made to last for centuries, but you were going through different stages in your relationship with toys, with cinema, with the animated medium, and with allegories of growth via fantasy tales. You aged past Buzz. Each time he came back, he had something important to say to you. But now you take your child, maybe your grandchild, to watch Buzz.

Once, he was a central part of your life. Now he's merely a cherished memory.

Can Buzz Lightyear still mean something in this century?

Pixar's clever dance step around the question of nostalgia rot is to pretend that this is not a new take on the character, but the original version that prompted the mass production of the Buzz Lightyear action figure in the first Toy Story film. It's really a simpler concept than it sounds like, even if its plot engages in deliberate dialogue with a legacy it's not supposed to be aware of, and its metafictional existence within the Toy Story universe opens the way to disturbing implications (if this is supposed to represent a live-action film, is the robot cat prop a sentient toy?).

For the first third of the film, Buzz follows an arc comparable to the breezing summary I've just provided of Toy Story's presence in the lives of audiences: in order to test an experimental hyperspeed fuel, he jumps further and further into the future, becoming an increasingly occasional presence, desperate to maintain meaningful connections, and ultimately retired as a relic as soon as priorities shift. Not unlike the show Quantum Leap, Buzz keeps repeating the same flight test over and over, each time hoping to finally get it right.

Here Buzz displays the same fundamental character flaw as in the 2000 tie-in film Buzz Lightyear of Star Command: a misplaced sense of responsibility that makes him consistently refuse help until it's undeniable that he needs partners. Buzz's spiral of isolation, propelled by his determination to get the mission done, because he's a masochistic self-blamer who has no sense of purpose without a mission, feels like familiar territory already visited in the 2000 film. That's as far as characterization can go in a story like this. As is tradition in many of the space swashbuckling fantasies that served as indirect inspiration for this movie, Buzz is not so much a character as a template for viewers to project themselves onto. For the actual movie Lightyear that you're watching in 2022, this is a scriptwriting problem. But for the fictional movie Lightyear that Andy watched in 1995, this is exactly how you sell toys.

The internal mythology of Buzz Lightyear draws from every science fiction franchise you can remember, complete with evil emperors and captain logs, but Lightyear's influences do not get integrated in a cohesive manner. Once Buzz makes his last jump into the dystopian future threatened by Emperor Zurg, the plot starts feeling like it's losing its grasp on a clear direction, and his stubborn insistence on doing everything alone overcomplicate scenes that could have been resolved with less drama.

At its core, Lightyear is the story of a veteran coming to terms with the passage of time and his shrinking place in the story. Buzz's encounter with Zurg signals that the pursuit of an imagined life runs the risk of making you forget the real one you're having in the present. Much has been made of the, frankly, minuscule queer representation in the movie, which may distract from the more obvious plot point that Buzz doesn't truly leave the past behind until he equips his starship with a rainbow gemstone.

The quest for continued relevance is a preoccupation that the movie assigns to both Buzz and itself. It tries to evoke the feel of the Flash Gordon serials and, of course, both of the big Star franchises. But instead of the now-common practice of attempting to recapture an old moment of wonder via repetition and allusion, this movie gave itself the harder task of pretending to be that first experience. Although the villain's big plan involves the return to an idealized past, Lightyear is not a case of nostalgia (because anything it could try to revisit is supposed to be provided by this story for the first time), but of pastiche. It may be unfair to cast Pixar as a victim of its own spectacular successes, but Lightyear is certainly not the best that the studio is capable of, and at times it's a stretch to imagine small Andy being blown away by it.

That brings us back to the issue of nostalgia. Toy Story 3 taught us that it's healthy to let go of the symbols of your childhood. So it's not clear who Lightyear is for: is it for the now-adult generation that grew up with the Toy Story movies, or is it for the younger generation that is only now discovering them? If the answer is the former, there will be little new material to surprise veteran viewers; if the latter, it's doubtful that somewhere there's an Andy who will be so enchanted by this story that he'll make Buzz Lightyear his new favorite toy. As in the movie, the time of Buzz is passed.

Penalties: −2 for giving Buzz the same emotional arc he already went through in the 2000 film.