The Jurassic franchise has gone the way of the dinosaurs

With its disregard for theme, characterization, or plot logic, Jurassic World Dominion is unworthy of the franchise's revered legacy 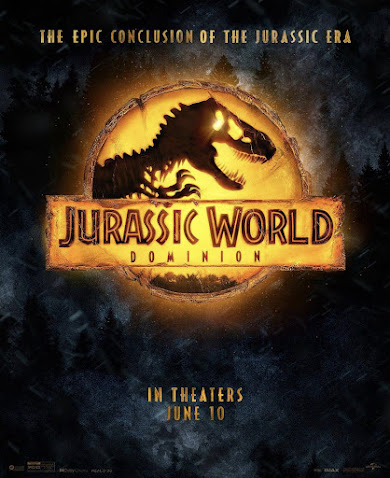 The last time I wrote about the Jurassic franchise, I warned that Fallen Kingdom was trying to be so many things at once that it exhausted the possibilities for the story to keep growing. Time has proven me correct: its sequel Dominion is a flavorless purée with so little sense of its own identity that it's made of moments stitched together to pose like a movie. A monster meat market (stolen from Pacific Rim), an extended motorcycle chase (stolen from James Bond) or a cave detour with pointless hat rescue (stolen from Indiana Jones) hint at a world that is more interesting than the tightly contained glimpse we're given. And even within all the constraints this movie imposes on itself, it's remarkable that such an overcomplicated plot needs so many perfect coincidences to keep moving.

How did we get here? At the end of Fallen Kingdom, two world-shattering events happened: dinosaurs were released into the world, and we learned that the same dinosaur-cloning technology had been used to clone a human. Either of those two twists should have resulted in drastic changes in everyday life for the sequel to explore. But the start of Dominion pays just the most perfunctory lip service to that new state of affairs before jumping right back to a tiny ensemble of protagonists who, three movies in, haven't earned a reason for us to care about them. Chris Pratt's Owen Grady is somewhere in Nevada playing cowboy, taming a herbivore dinosaur we never meet again, while Bryce Dallas Howard's Claire Dearing is still trying to redeem herself with petty acts of heroism. These two establishing scenes are so disjointed from each other that it comes as a jarring surprise when we learn that Owen and Claire are actually back as a couple.

After these multiple skippable prologues with no consequence, the story proper begins when Maisie Lockwood, the aforementioned human clone, is kidnapped along with a velociraptor clone. Where Fallen Kingdom tried to establish a thematic parallel between dinosaur cloning and human cloning, here it's made explicit: the quest to save both victims is the same, the miraculous tale of their birth is told with the same reverence, and the ethically compromised scientist wants them for the same technobabble reasons. But if this rescue plot feels too small and remote from the somewhat more urgent fact that there are dinosaurs loose all over the planet, the plot behind the plot is even more obscure: an evil corporation wants to control the world's food supply, so they create both mutant locusts with dinosaur DNA, designed to eat everything, and proprietary mutant seeds that the locusts won't touch.

All this is so much unnecessary material added on top of the basic Jurassic premise that you could cut the fluff and make totally different movies with it. This might have been a movie about mutant locusts and mutant seeds, and not be a Jurassic movie at all. This might even have been a movie about the quest for a cloned child, and not be a Jurassic movie at all. The whole reason why we go to see a Jurassic movie is for the simple, primal delight of watching dinosaurs munch on people, so it's strange (although perhaps not so much if you recall that this movie has two casts' worth of unkillable protagonists) that Dominion features more violence committed against the dinosaurs than by them.

For all that Fallen Kingdom closed off narrative avenues, it left a valuable one open, a theme that until then had only been implied: that the Jurassic franchise is at the same time a moralizing fable of environmental preservation and a monster/survival/horror/thriller, but the three original films didn't explore that ambiguity to the degree that Fallen Kingdom did. Perhaps The Lost World came closest to making that kind of statement, the thorniest conflict in monster movie tropes: that you have an ethical responsibility toward the monster that's trying to eat you. The choice in Fallen Kingdom to introduce a human clone, who can tell us how she feels about her existence, is an apt substitute for the impossibility to articulate the dinosaurs' point of view (and it's no coincidence that it's this clone character who makes the crucial choice to liberate the dinosaurs). But also, on a more honest reading, we need the character of Maisie because the franchise ran out of things to say about the dinosaurs. Owen's speech about mutual respect with raptors doesn't really pay off (much less when most of his scenes with raptors involve running from them), and his ridiculous trademark posture with her palm stretched out, as if he's cosplaying Iron Man, gets tiresome really fast. Maisie should have been the heart of Dominion, but instead she's a hot potato jumping from set piece to set piece.

The action scenes are fine, and the dinosaurs are adequately scary, but you can only keep replaying the greatest hits from "high-tech compound fails to contain dinosaurs" so many times before it feels predictable. When all the named protagonists are movie superstars that you know the plot can't let die, the threats feel hollow, and the fights therefore fall flat. Nevermind how these characters are capable of keeping their perfect hairstyle after each scene: it's amazing that they can run so fast with all the plot armor they're carrying. But you can't have fight scenes without someone getting injured, and that pushes the movie into an ethical contradiction: our heroes are supposed to be environmentalist defenders of the very same wildlife they spend two hours stabbing, punching, and tasing. At some point, you have to ask: does Jurassic World Dominion want the dinosaurs to survive or not? And when is it going to make a case for us to care either way?

After the day is saved, nothing really changes. The looming food crisis is averted as suddenly as it was introduced. Dinosaurs are still part of daily life, but daily life appears much the same. Maisie is still profitable to every biotech company in the world, but miraculously no one tries to kidnap her again. There's still a black market in dinosaurs, which our heroes are content to leave be. A big speech is made about the need for humility if humankind is to coexist with the dinosaurs, but we don't get to see what that coexistence really looks like for ordinary people. As soon as the named protagonists achieve what they want, the outer world ceases to matter.

The Jurassic franchise has fallen prey to the same malaise of every big IP in our era of sequelitis: it forgot to be about something, and has opted to use big, flashy spectacle to disguise the lack of substance. With its too numerous contrivances, painfully unfunny jokes, uninspired dialogue, and confusing editing, this movie hits the franchise like the proverbial meteorite that put an end to the era of the big lizards. Just like Ghostbusters: Afterlife committed unforgivable necromancy in reanimating both its plot and its star, Jurassic World Dominion is guilty of cloning an inviable descendant of a fossilized relic.

Bonuses: +1 for some visually stunning shots.

Penalties: −1 for dragging back the original cast to give them zero character development, −1 for having on its hands the prefect premise of dinosaurs walking among us and wasting it entirely on promo featurettes.