Microreview [book]: Son of the Storm by Suyi Davies Okungbowa 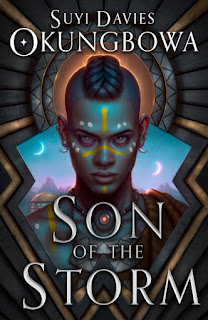 After the intriguing debut that was Suyi Davies Okungbowa's David Mogo, Godhunter, I've been intrigued by what Okungbowa's take on epic fantasy might look like. Drawing on pre-colonial West Africa for its worldbuilding inspiration, Son of the Storm pivots around the nation of Bassa: a rigid, stratified city at the heart of an empire, whose wealth and geopolitical appears to hide its growing problems. Inside that city are Danso, a talented novitiate at the University of Bassa who appears to have a great future ahead of him, if he can overcome both persistent racial discrimination and his own interest in forbidden knowledge; his indentured second Zaq, who is looking for a way to build control over his own life in a society which accords him none; Nem, a fixer who is considered invaluable by the city's elite even as she is shunned for ignoble work and her lower-caste origins, and her daughter Esheme, Danso's partner at the university, who is eager to take the opportunities given to her and carve out her own position.

All of these characters' initial roles are dictated by Bassa's strict racial and caste-based hierarchy, where dark-skinned original inhabitants of the city maintain authority and privilege while lighter skinned folk occupy lower status roles, with low-caste migrants from outside territories are forced into indentured servitude. Mixed race people like Danso belong to the Shashi, and are officially without rights or position in the city, with most of their population living in an isolated outside territory called Whudasha. Even further outside the heirarchy, and treated as mythical demons since their islands fell out of touch with the mainland and were declared lost, are the "yellowskin" inhabitants of the Nameless Archipelago. Following the "Chekov's lost civilisation" rule of epic fantasy, of course, we are soon introduced to a magical substance from the archipelago, and to Lilong, the agent trying to get back the piece of it that has arrived into the city. When Danso and Lilong collide, it sets them on a path outside Bassa's walls, while those who remain are left with a radically different political environment and their own choices to make.

This set-up leads into a story that's hard to really define. Several of the characters end up travelling, but it's not really a quest: the people involved stick together more for survival than anything else, and Danso in particular is notable for his absence of really well-defined goals despite being the closest thing Son of the Storm has to a main protagonist. Back in the city, Esheme's machinations have a somewhat clearer goal, but there are characters working around and under her who have their own motivations and activities which add a whole host of nuance to what she's trying to achieve. Esheme and Danso quickly end up at odds with each other, but it doesn't feel like their goals and motivations are inherently opposed: rather, their personal histories, different ambitions and responses to the trauma of discrimination seem just as weighty as their political goals, if not more so. Son of the Storm is full of complex characters doing things which don't feel driven by an overarching plot point, and even ibor, the magical substance which sparks Danso's flight from the city, isn't a complete gamechanger a lot of the time. In some ways, that makes Son of the Storm a more intriguing and nuanced ride, and having characters vaguely fill the functions of protagonists and antagonists without their motivations being flattened to fit with a "traditional" epic fantasy quest makes them even more interesting to follow. It does, however, lead to a feeling that there's not much direction in Son of the Storm at times, and the book leaves off at a point where it just feels like the board has been set up for an actual clash in future volumes, making this one feel rather like a 450 page long set-up. Still, there's plenty to carry the book through here even when the story itself feels like it's dragging.

Behind the characters, there's an immense depth to the worldbuilding of Son of the Storm, and much of it is developed in subtle clues and context rather than being explained within the text itself. This makes a lot of sense for a book set in an empire that has been actively curating its own history, so that even highly educated characters like Danso know they don't have the full picture of what's going on; the influence of Bassa's narrative about itself is also evident in the fact that none of the main characters really come out in opposition to the oppressive structures on which the city operates, even those who have been most affected by it. Son of the Storm's characters showcase the fact that very few people fit happily into a rigid social system, especially one which relies on exploitation to maintain power, and it also demonstrates how people can become complicit in, or even defensive of, a system that hates them, when it seems like the only alternative is to push for revolution and lose the little which they feel the have.

Beyond Bassa itself, there are geographical elements like the extreme tides which have apparently cut off travel to and from the islands beyond the continent, as well as magical geographies like doorways and a breathing forest. Sadly, my advance copy of Son of the Storm didn't come with a map, but I'm interested to see a visual representation of how the Savannah, the Mainland and other parts of Bassa's world fit together. I certainly wouldn't mind if future volumes made some of the magical geographies of Danso and Lilong's world a bit clearer, though if this ends up being a series whose fantasy worldbuilding goes far deeper than what's on the page - a la Neon Yang's Tensorate series - I would still be along for the ride.

In short, Son of the Storm is a great book, although it's one whose mission to portray a nuanced take on epic fantasy characterisation left me feeling a bit lost on occasion. This is shaping up to be a great series, though, and I'll definitely be tuning in for the next volume to see where Okungbowa takes the Nameless Republic next.