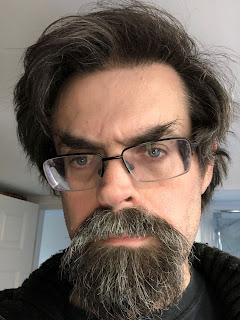 Adrian Tchaikovsky is the author of the acclaimed ten-book Shadows of the Apt series, the Echoes of the Fall series, and other novels, novellas and short stories including Children of Time (which won the Arthur C. Clarke award in 2016), and its sequel, Children of Ruin (which won the British Science Fiction Award in 2020).. He lives in Leeds in the UK and his hobbies include entomology and board and role-playing games. 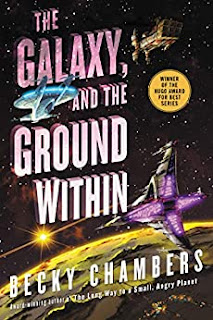 Becky Chambers – The Galaxy and the Ground Within

I love Becky Chambers. I’ve enjoyed absolutely everything she’s written. It’s a common trope to have space opera focus on the little people – that ragtag band of misfits. However they’re usually up to their necks in the big things – the galactic empire or universe-threatening terror or the like. Chambers excels at weaving stories about the everyday lives of spacefaring folk in a way that is absolutely engrossing. Showing that their own personal quirks and needs and histories are every bit as important to them (as ours are to us) as the galactic threat is to a more traditional space opera. She’s a character writer par excellence.

Also, it’s a space opera standard that alien species be socially convergent to the point where they can interact as a community, but Chambers also keeps them alien, playing with the way that their particular physiologies, sensoria and psychologies rub against the need to work with other species. A great many of her POV characters aren’t human, and they’re a joy to experience the universe through.

I honestly wouldn’t have said, before coming to her first book The Long Way to a Small Angry Planet, that I’d love this sort of slice-of-life science fiction quite as much as I do, but I’m an absolute convert. And, with the possible exception of Tidhar’s Central Station, I’ve not come across any other author who does it so well. 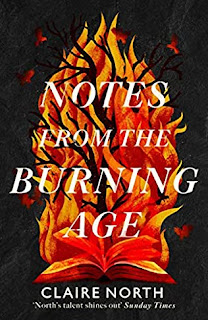 Obviously there’s a limit to what I can say, not having read it yet, but North is another author who has never disappointed. I started with the acclaimed First Fifteen Lives of Harry August, as mind-twisting a book as you could possibly want, and I’ve enjoyed everything since, especially The Sudden Appearance of Hope, another book that really plays with narrative conventions and reader perception. Then there’s 84K, perhaps the bleakest and most plausible near future dystopia I ever read, which was a profoundly harrowing read and which has just stuck with me ever since.

Notes from the Burning Age feels as though it’s a post-apocalypse book in the general style of Miller’s Canticle for Leibowitz – so not the immediate Mad-Maxiness phase but after things have settled and our own age has become myth (or I’m reading the blurb completely wrong, of course!) I’m agog to see what North does with that kind of setting. She really is one of the most incisive and original voices out there. 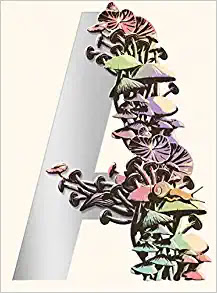 I recently picked up the beautiful collected volume of Ambergris, Vandermeer’s first magnum opus series (and any author who has honestly produced multiple magnum opii (?) is always worth keeping an eye on. His Southern Reach definitely counts as another). City of Saints and Madmen came out shortly before I got my first book into print and was a huge favourite of mine at the time – an unconventional narrative/history tunnelling beneath a variety of different documents arising out of his fictional city of Ambergris. This then moved on to Shriek and Finch, playing out the long term history of the bizarre city and the secret behind and beneath it. For, just as the original denizens were the ‘mushroom dwellers’, and just as the visible mushroom is just the transient expression of the fungus beneath, so all we see of the city is just a fruiting body of something vaster and deeper and much more sinister.

Vandermeer in full surrealist mode is one of those writers always telling two stories, the one set out in the words, and the one lurking in the subtext. It’s a trick relatively few authors can really pull off (Gene Wolfe, below, is another), and certainly I don’t think I have the knack for it, but it’s wonderful when you see a master pull it off so deftly, and with the actual material being so entertaining. Vandermeer is also an author with a profound sense of the natural world (it comes out even more strongly in the Southern Reach books, but it’s there in all of his writing), which is something I feel my own work is heavily informed by, and I always appreciate it in others. 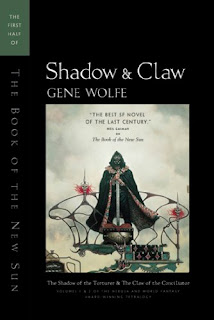 Gene Wolfe – The Shadow of the Torturer

So I bounced the hell of this when I was about 15. I saw rave reviews and I went in with great expectations and just could not get any of it. The language was opaque and the plots just seemed to go nowhere and basically just what the hell, man?

Fast forward to now: Wolfe is most definitely one of my all-time favourite authors. I just hit him too young, and with all the wrong expectations. He doesn’t write the sort of straightforward narrative I was anticipating, and there are puzzles within puzzles hidden in the story for the reader to disentangle – to the extent that I’m sure that there’s plenty in Book of the New Sun that I haven’t ever clocked, despite reading it multiple times. But that’s fine, because even those strata that I have exposed tell such a remarkably rich story on multiple levels. There is all the complexity of Severian and his own rather suspect take on events (Wolfe is the master of the unreliable narrator), and there is the incredible world built through Severian’s travels and reminiscences and chance mentions. Then again there’s a profound burden of philosophical speculation woven through the text, much of which I suspect has passed me by.

From a pure worldbuilding perspective, the New Sun books are a real education. Because you can build a world through saying too little and you can build a world through saying too much, and both ways can go wrong. Wolfe somehow manages to do both without it going wrong at all. There is a vast, living, breathing world in those books, seen through Severian’s fleeting attention and obsessions, so that we’re dragged hither and yon by his stream of consciousness. The overall impression, once you settle into the way the story is being told, is of a vastness of creation beyond the details on the page. And because, when Severian does want to give us a deep dive into some small aspect of his world, he really goes deep, the implicit assurance is that the same level of detail is waiting invisibly in absolutely everything else, even those aspects that he gives only the briefest mention of. 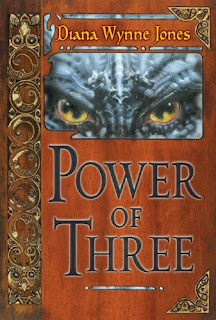 Wynne Jones is, I suspect, one of the most popular choices for influential childhood author. However, Power of Three is certainly not one of her better known works (indeed my other favourite of hers, Homeward Bounders is also fairly obscure). This was an absolutely seminal work for me, though, because of the tricks it plays on the reader.

It starts off in what is clearly a bronze-age style fantasy world. There’s a village of people living by a lake, and they have enemies in the horrible shapeshifting fish people who live in the lake. So far so Celtic myth, so straightforward good and evil, us and them. Not so different from any heroic fantasy out there, you might think.

Except (and I won’t otherwise spoil it) everything you assume about the setting and what’s going on is wrong. Who’s right, who’s wrong and even the basic axioms of the world are completely up for grabs, and there are a couple of solid switchback reverses that, for a 14 year-old reader, were mind-blowing. I learned a great deal about what could be done with a story, and how the writer could interact with reader expectations, that stayed with me all the way to when I began my own attempts at serious writing. 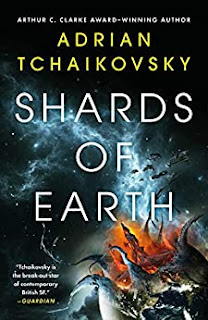 So let’s talk about Shards of Earth which is coming out in the middle of this year (August in the US and May in the UK). This is my own foray into space opera, as opposed to the somewhat more science-constrained SF I’d put Children of Time into. It’s an excuse to play with aliens, really great and small. It’s also absolutely an excuse to have my own ragtag group of misfits neck deep in galactic affairs because that is frankly fun to write. In this case, galactic affairs concern the Architects, moon-sized entities which turn up over inhabited planets and reshape them into delicate, beautiful works of abstract art, incidentally killing everyone living there. The Architects had a fair go at obliterating humanity a while back, destroying Earth and a lot of other colonies before mysteriously vanishing away again.

The human ‘polyaspora’ was left deeply traumatised and has been slowly building itself back up, with the help and/or hindrance of a variety of neighbouring alien cultures and its wartime-developed Intermediaries, surgically enhanced human weapons designed to interact with the Architects but also (because of the peculiarities of travel in the setting and the way the Architects are related to it) superior FTL navigators.

Idris, the lead, is one such Intermediary, now very much retired to obscurity, thank you. Except he and his crew come across a ship that’s been recently mauled by the Architects and suddenly the war might be back on just when humanity is on the brink of war with both its neighbours and itself. There’s a lot of action and espionage, there’s a real look at a humanity still living with the trauma of the war, and what sort of unhealthy things that can do to a culture’s outlook. There are all sorts of fun aliens (yes, including an insect hive-mind bunch, because it’s me). There’s deep space metaphysics because there’s most definitely something nasty in the unspace that people use to navigate between stars. And there’s a big mystery, because what are the Architects, where did they go, and why are they back?

This series has let me go a bit wild with the SF, whilst still trying to keep it all within a properly conceived and realised framework where it’s all internally knitted together. I’ve had a huge amount of fun putting a wider universe together and fooling around with the different aliens (some of which are quite human-level in their outlook, some of which really aren’t.) My favourites might be the Essiel, who were the first great Huge Alien Empire humans encountered, before the Architects ever turned up. They were perfectly positioned to be the great alien threat to humanity, except they weren’t invading anywhere and, despite their earnest desires to communicate something very important to us, nobody could quite work out what they wanted… until the Architects turned up and people realised they’d been warning us…