Nicole Kornher-Stace lives in New Paltz, NY, with her family. Her books include ARCHIVIST WASP (Small Beer Press/Big Mouth House, 2015) and LATCHKEY (Mythic Delirium, 2018), which are about a far-future postapocalyptic ghosthunter, the ghost of a near-future supersoldier, and their adventures in the underworld. She has two more books due out in 2021: FIREBREAK, forthcoming from Saga, and JILLIAN VS. PARASITE PLANET, forthcoming from Tachyon.

You can find her on Twitter @wirewalking, where she is probably semicoherently yelling about board games, video games, hiking, fictional representation of strong platonic relationships, good books she’s read recently, or her cat. 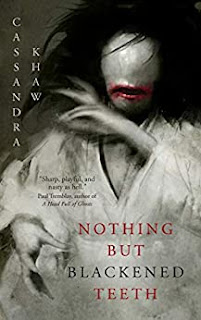 I'm nearly through an advance copy of Nothing But Blackened Teeth by Cassandra Khaw (forthcoming in October 2021), and I recommend it highly! It subverts a bunch of horror tropes in really delicious ways, and the prose is muscular without being overwrought in a way that reminds me of nothing so much as Tanith Lee. I've also just finished reading Elatsoe by Darcie Little Badger, and it is delightful. It has an asexual protagonist whose best friend is her dog. Who is also a ghost. It's extremely wholesome and was just a really nice palate cleanser from ::gestures at 2020-2021:: and everyone should absolutely pick it up. 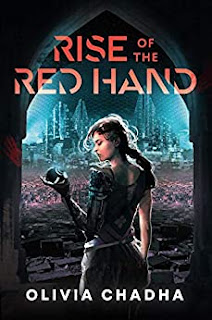 Apart from Nothing But Blackened Teeth, which I mentioned above, and Khaw's other forthcoming novel The All-Consuming World, I'm super excited about Rise of the Red Hand by Olivia Chadha!! It'll be out by the time this goes to print, and I just know that Future Me is going to love it. 2021 is going to be a great year for diverse, inclusive cyberpunk, and I'm very, very excited. 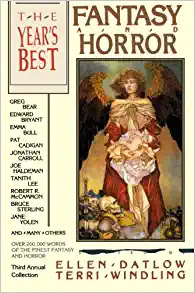 I actually just went back and reread my old copy of The Boxcar Children for an entirely ridiculous side project I'm working on in my Patreon, but, as for stuff I originally read when I was older than 5 or so--since realizing that Nothing But Blackened Teeth was reminding me of Tanith Lee, I've wanted to go back and read some of my favorites by her. I first discovered her work in the Year's Best Fantasy and Horror anthologies edited by Ellen Datlow and Terri Windling, (I remain very glad that when my dad found some of these books at a used bookstore and handed them to twelve-year-old me, he never flipped through them beforehand because there's so much stuff in there that my parents would have deemed age-inappropriate, but I'm not sure if I'd ever have gotten into writing SFF without them.

So this is an anecdotal aside about not censoring your kids' reading, I guess.) and it blew my whole mind. I spent much of my teens hunting down as much Tanith Lee and Angela Carter as I could get my greedy mitts on, thanks to those anthologies, and they were absolutely formative for my writing, as you can very much tell if you can find any of my older stuff from pre-2010 or so!

At some point I got rid of a lot of my Tanith Lee collection--I move a lot, and books are heavy, and I'm not generally a big rereader these days, as I live about a block from a library, and there are way more books out there than I have time to read--but I kept some of the ones that were the biggest influence on me, The Secret Books of Paradys probably the most influential among those. I haven't read them since I was probably 18 or so, and they've been sitting on my shelf judging my life choices ever since.

This one's tricky! I'm not a big rereader or a big DNFer, so 99.9% of books I read get read once, for better or worse, and my opinion of them doesn't really change much afterward. 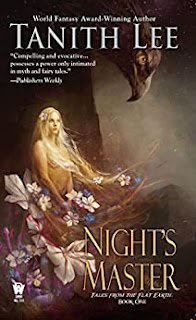 Even though my writing style has changed a lot from when I was a teenager, I still have to give lots of credit to Tanith Lee. Not even any one specific book as much as her body of work itself. I write (and read) as much for the prose as for worldbuilding, character, plot, etc., and her work is where I imprinted on a number of things I still seek out in others' writing and have adopted into my own. For instance: she was a master of word choice. Plenty of people can choose their words precisely, but she could weaponize hers in a way that did all kinds of heavy lifting in lieu of paragraphs of description and exposition. She could keep a reader perpetually slightly off-balance one unexpected turn of phrase at a time. She could make the atmosphere of a story feel like a weight that just pushes you down and sits on you, and she could do it in extremely little space. I wish I'd read any of her stuff recently, so I had specific examples to bring to mind. But if you're into muscular language, prose with real texture, and dreamlike imagery, and you haven't read her yet, oh my god are you in for a treat.

Hilariously, after having books out in 2015 and 2018 and nothing out in the years between or since, I have two books coming out this summer! Firebreak (May 4, Simon & Schuster/Gallery/Saga) has gotten compared a lot so far to Ready Player One, and it's similar in that it's about a VR gamer in the future, but, honestly, the similarity ends there. It's about Mal, the equivalent of a Twitch streamer in the year 2134, who lives with eight other people in a hotel repurposed as housing for people displaced by corporate civil war. The book is, essentially, the story of her radicalization from obedient consumer-citizen to anti-corporate activist. It's got ownvoices asexual/aromantic representation, strong friendships, lots of action scenes, and a whole bunch of stick-it-to-the-man energy.

Then, in July, I have my middle-grade debut, Jillian vs. Parasite Planet, forthcoming from Tachyon, which is a space survival story that pits an eleven-year-old girl with anxiety and a snarky, cartoon-addicted, shapeshifting, intelligent nanobot array against an alien planet full of creepy mind-control parasites. I'm chronically terrible at talking up my own books, but I had a ton of fun writing both of these, and I very much hope they find their readers.