Floodpath wraps up the story of a world-changing embassy, where intrigues over power run from the glass windows of the palace to slave camps in the desert. 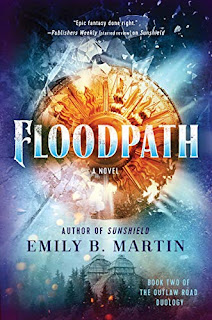 At the end of Sunshield, the first in the Outlaw Duology, things were in quite a state. Revelations, a power structure now aware of the danger to it, and Lark starting to learn she is not who she always thought she was left the characters on almost literally cliffhangers, across the board. In Floodpath, the consequences of those revelations, and the slow turn and discovery of what forces are behind the long standing inequalities of a whole half of a continent, come to light and life through the four characters we get to know in Sunshield, but particularly Veran, Tamsin and of course the Sunshield Bandit herself, Lark.

When last we left Lark and Veran, in particular, Veran had just discovered the awful truth about Lark that she herself did not know--that she is in, fact, a missing long lost Lumeni princess, Mona Alastaire. Lark reacts to this revelation in classic Lark fashion, of course, and runs for it, not wanting to believe such a tale (surely Veran is manipulating her) and leaving Veran just to try and chase her across the hostile desert. Tamsin in the meantime has fled the Moquoian court too, as forces there are not happy with the long imprisoned Tamsin being active and free again, especially when the reasons for her imprisonment could shake an entire government.

From here, the paths of the main three points of view, cross the desert and go through travail and hardship. If the first novel, Sunshield, was all about setting the pieces of the conflict on the Outlaw Road and starting to sketch and shade in the lines of the Problem, this is a novel of execution, and revelation and the consequences of some decisions that are long ago indeed.

Along the way we get some by now classic Martin touches, including Veran and Lark having to traverse a truly dire part of the desert called The Water Scrape. Not only are they very reluctant allies, but Veran’s disability (his seizures) makes this a particularly prickly pairing. Readers might well guess what is going to come of this shared idea, but the relationship between the two is hardly fairy tale or trite, but more of a very slow approach to each other of very two wounded birds--one by his disability and one who has lived a rather hardscrabble life and can’t really remember the world before it. There is some very lovely set piece description and evocation of the dangers of having to cross the desert, and some very strongly emotive bits as they start to cross ecological biomes. This is a continent and ecological experience, reading, that is first and first an American sort of landscape in a way that a lot of fantasy fiction, even today, doesn't quite capture. Martin is still a trailblazer in using American landscapes for her settings.

The other classic Martin touch is to be willing to “blow up Vulcan” and show a ground floor change in the status quo, as Tamsin’s vocal disability leads her to a way to use her voice in a way that is hitherto unknown in this world. If the spread and the use of Tamsin’s clever idea is maybe a little faster than it might be in reality, the power of the story of such a revolutionary change, especially since the consequences and advantages only come to mind with time, feels accurate and right. I suspect that the invention, which delighted me when I realized what Martin was doing (and I desperately do not want to spoil) is going to have permanent and long lasting impacts on her entire world. Martin’s world is not a static one where things remain the same without change for generations--inventions, ideas and the actions of people can and do make a difference and a lasting difference.

The plotting of the book also works well. Martin has evolved and matured as a writer, and now, by Floodpath, really knows how to leverage into her strength into keeping the action front and center, mixing up the character beats and the action sequences, and making the reader hooked into reading one more chapter on the heels of successes, failures and revelations alike. The word page-turner has some baggage and connotations, but it is Martin’s experience with YA and YA/Adult crossover writing that serves her here to make her prose and her plotting such that the reader engages and stays engaged in a distracted world we live in. Martin, pre-Covid, might spend summers in National Parks, but not all of her readers are so lucky as to get to read her books isolated from distractions, and so Floodpath, like Sunshield, definitely is written to keep the pages turning.

One stylistic consequence of the book does impact readers who are unfamiliar with the previous three novels set in this verse, Woodwalker, Ashes to Fire, and Creatures of Light. Given the place in the book where the climax of the action of this duology takes place, and the amount of falling action space, I think readers who are not familiar with the characters of the Eastern Alliance might be a bit lost at sea, or not quite get the full character impact on the characters that we have come to know over these two novels. Don’t get me wrong, there is an extremely moving scene I will not spoil, but I fear its impact is lessened and might feel less important to readers who have not been on the full five book journey, so readers of the last portion of the book might not quite get as much out of the aftermath as other readers do.

That said, like the end of the first trilogy, there has been yet another massive set of changes to the Eastern Lands, this time  by the actions of Veran, Tamsin and Lark, and the consequences, good and bad of those changes doubtless can serve as fodder and inspiration for more novels set in this world. I’ve come to truly appreciate Martin’s sense of place, space, character interaction and evolving and growing writing style over these five books, and I think that, the stylistic consequence above aside, Floodpath is entirely and completely her best novel yet.

Bonuses: +1 Very strong sense of geography and place for the characters to inhabit.

Penalties: -1 The amount of falling action in the book is much more geared toward all five novels, rather than the story presented the duology.