Review: We Are Satellites

This amazing near-future novel weaves a delicate thread through the messy places where our personal, professional and political lives meet 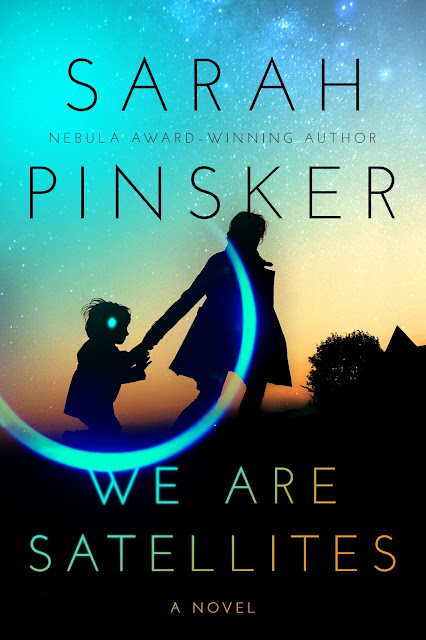 Sometimes, current events seem to give us an ominous glimpse of the direction we're headed. I remember having that feeling in 2011, after Apple released an ad campaign with the disgustingly condescending slogan, “If you don’t have an iPhone, well, you don’t have an iPhone.” The implied message was that possession of this particular product gave you an advantage that you were hurting yourself by choosing to skip. That attitude was taken too literally by Chinese teen Wang Shangkun, who became famous in the same year by selling one of his kidneys to buy an iPhone 4, and now lives permanently bedridden and dependent on a dialysis machine.

The fetishization of high-end gadgets as social status markers is the topic of Sarah Pinsker's new novel We Are Satellites. In a world uncomfortably too like ours, pharmaceutical company BNL (not related to Wall-E's Buy'N Large, though it may as well be) has launched a brain implant that promises to improve attention and productivity by helping the human mind approximate real multitasking.

Through aggressive marketing, the implant ends up subsidized by the government and de facto required for job applicants. Sooner than society can adapt to the shift, schools become segregated between those who do not want or cannot use the implant and those who have it and function so efficiently that they leave their classmates far behind. In a bone-chilling segment, the novel explains, "There wasn't even a rich-poor divide since the company covered them for kids unable to afford the procedure; the divide was between approved brains and unapproved brains and degrees of acceptable neurodiversity." Because the operation to install the implant leaves a pretty blue LED on one side of the head, wearing that dot of light becomes the focus of a dangerous status game that implicates school authorities, army recruiters, ad strategists, grassroot activists, drug dealers, illegal surgeons, corporate spies, and unsuspecting children.

We follow the story through the lives of Val and Julie, a married couple of career women who are raising their kids David and Sophie with the best intentions. When David convinces his mothers to get him a brain implant so he can perform better at school, the societal tensions defined by this very visible mark of privilege start seeping into their family dynamics.

It turns out his sister, Sophie, cannot get the implant because she has epilepsy and the manufacturer would rather not mess with her brain. One of the mothers objects to the implant on principle, but her wife gets the operation shortly after David because she wants to stay competitive in her field. After David's implant is revealed to have sensory processing issues, we are carried through a deeply detailed plot of corporate irresponsibility, medical neglect, political opportunism, workplace discrimination, sibling envy, systemic ableism, and the many ways the external world can invade our private choices.

All four family members get first-person chapters, but David's are the most engaging. The long train of sentences does a great job of conveying his mind's permanent state of panicked hyperawareness. For example, "He could describe the location of every fly on every wall in a room full of flies but he didn't notice his body's reactions until he counterreacted to them." If the delight of science fiction is making unreal worlds feel close to us, this novel does one better: it makes us live a mental state that has never existed.

Sophie's chapters are also enjoyable. Her lifelong determination to gain the respect of the adults in her life takes her on an unexpected road to maturity. The inner voices of the mothers are harder to tell apart, but the author manages to communicate with heartfelt sincerity the stress of raising children in a world of cutthroat overachievement. As the narration helpfully describes, these characters are trapped in "a system in dire need of change, but the wrong change had arrived. The wrong changes were everywhere."

I still feel bedazzled by the skill with which a book that could have been a standard techno-thriller became also an intimate meditation on family, identity, self-discovery, trust, anxiety, and a love that stays alive and defiant against the pull of impersonal competition. Toward the end, the author employs an interesting metaphor about the uninformed use of medical devices: one character watches, without paying much attention, "a home improvement show where people got absurdly excited about other people removing all the personality from their homes." The BNL implant expects its users to submit their individual thought patterns to a standardized information model, and what the novel expects from us is to treat such a proposal with all the skepticism it ought to deserve. We Are Satellites is definitely one of the highlights of this year, and will surely spark fertile discussions between academics, healthcare professionals, and tech enthusiasts.

Bonuses: +1 for nailing the tone of David's inner monologues, +1 for a masterful handling of the emotional storm brewing within a family that comes close to breaking apart but rises again stronger.

Penalties: −1 for too short chapters. The various POVs are not a problem in themselves, but the chapters are composed mostly of a single scene that ends too soon before we jump into another character's head. Halfway through the book, one has developed a sense for when a chapter is just about to end, and the effect is an abrupt start/stop/start/stop sequence that hurts the narrative pacing.