Sue Burke is an author and translator who has lived in Madrid and Milwaukee, and currently resides in Chicago. Her newest novel, Immunity Index, comes out on May 4th.  She is also the author of the novels Semiosis and Interference,  her short stories and non-fiction articles have appeared in Asimov's, Clarksworld, Slate, Tor.com, Supersonic, and elsewhere, and she has translated multiple novels and short stories from Spanish to English. Along with many translators and linguists, her dream is to talk with aliens.

Her forthcoming novel, Immunity Index, takes place in the not so distant future on Earth, yet much of what happens feels like it could have happened in the last year: a pandemic that leads to uncertainty and chaos, scientists racing for information, political protests, and people realizing that anything can be weaponized.  And since Burke writes science fiction, there are also secret sisters, a woolly mammoth, and a whole population of clones who are sick of being treated like second class citizens.  If you're a fan of Orphan Black and What Happened to Monday, you'll likely enjoy Immunity Index.

Burke was kind enough to chat with me about where she got the ideas for this novel, how to stay safe when you've just found your secret siblings, that the customer is not always right, her hopes for the future, and that even megafauna get hangry from time to time.  To learn more about Burke and her fiction, translation, and non-fiction, visit her website at sueburke.site, or follow her on twitter at @SueBurkeSpain.

NOAF: What can you tell us about your new novel Immunity Index? What's the elevator pitch?

Sue Burke: The United States is on the verge of a mutiny, human clones are second-class citizens, and three young women discover they are clones and sisters. When a sudden epidemic produces chaos, a scientist begins to unravel what’s really happening. Each of the women must fight to survive. One is an essential worker who hates her job, one is a rebellious college student, and one is caring for a genetically engineered woolly mammoth doomed by the chaos. Amid the mutiny and epidemic, their quest for freedom will lead them to each other.

NOAF: Secret sisters, a geneticist studying illegal technology, and a deadly virus. What inspired this story, and how did all those elements get into the story?

SB: The initial central question of the story is identity. What makes us the same and different? Some of it is genetics, and some of it is life experiences. What makes those differences stand out? People show their true nature in a disaster. Because the story is about genetics, I brought more genetics and more disaster into it. The elements posed a lot of questions, and the story resulted from one set of answers. 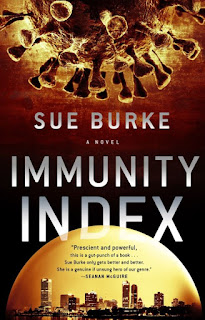 NOAF: When the three women meet each other and realize everything they have in common, how do they react to learning who they are? Are they surprised? Had any of them been suspecting this truth? Is there any sisterly bonding that happens?

SB: The women manage to find out about each other well before they meet, but as a kind of sisterly bonding, they also don’t contact each other to keep each other safe. I don’t want to say much more and give away the plot.

Each one reacts differently, though, because they are different people. Life prepares all of us to deal with surprises in different ways. The same thing that seems like a disaster to one person can be an opportunity to another. What if you had a sister you never knew about? Your reaction would depend on everything that has happened to you so far.

NOAF: Who was your favorite character to write? What made that person so interesting to you?

SB: One of the sisters works in customer service, and I’ve done that too. She must be subservient and pleasant to all the customers all the time … until, in the chaos, she can finally speak her mind. She says things that I and every customer service worker have always wanted to say.

NOAF: I hear there is a woolly mammoth in this book? Tell me more!

SB: Two words: charismatic megafauna. These are the big animals that we love to love, like tigers, elephants, whales, and gorillas. What could be bigger and more lovable than a six-ton hairy mammoth? I realized that I could bring one back, at least in fiction, so I did. But I had to be honest about it. This would be a demanding, cranky beast that would eat everything in sight, need constant care, and do poorly in captivity. Still, he captures the heart of one of the sisters, and eventually, she gets to ride him!

NOAF: What is your writing process like? Do you plot everything out ahead of time, or do you just start writing and see where the story goes?

SB: Many writers praise the creative, organic exhilaration of “pantsing” or writing by the seat of their pants without an outline, uncovering the story as they go along. So, I thought, I’ll give it a try. It didn’t work for me. My first draft was limp and only half as long as it needed to be. Nine complete re-writes later, I had the final version of Immunity Index. And I learned a lesson. Planning saves time and trouble for me, although maybe not for other writers; whatever works is the right method for you. Now I’ve gone back to my old ways. I use an outline detailed enough to serve as a roadmap, and I discover a lot of interesting sights and stops along the way.

NOAF: You were recently at the virtual Capricon41 Science Fiction convention, and you hosted a few panels. On your blog, you mentioned that the theme of the convention was “Creating the Future We Want”. What is the future that you want? What do you hope to see in the next 5 years, the next 20?

SB: I would like a quiet future. Slow but sure, we work through our problems. We make decisions that save us from dramatic disaster. People get opportunity, equity, and a chance to be their best and to lead good, productive lives. We bring climate change to a halt, and we live more lightly on the Earth.

I don’t actually expect this to happen, though, at least not in the next five to twenty years. Instead, I hope for noise — good noise, to paraphrase the late Senator John Lewis. Most of all, as we create this future, I don’t want to leave anyone out. We’ve done that in the past, and we’re living amid the wreckage.

NOAF: Thanks so much Sue!