A story with instructive, powerful, and necessary anger. 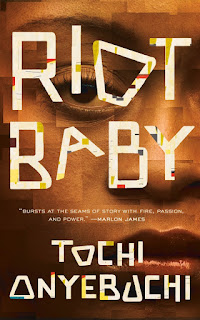 Oppression can be physical, but it’s often more than that. America has subjugated Black bodies for a long time—first with blatant slavery, and then with figurative, rather than literal shackles that has the insidious ability of being intergenerational. Disadvantages are established at birth, and the steps to get out of them are elusive, as ordained by the social system. In Riot Baby, a character is inserted with a gadget that monitors and controls them. But it’s also a significant metaphor for how incarceration, social disadvantages, and life with seemingly no escape route is embedded into many Black bodies. Not because they’re whipped and denied voting rights, but because America’s system has a way of finagling itself to mostly keep the status quo, while giving an illusion of exaggerated racial progress. It’s a system that should draw a lot of anger. And in Riot Baby, it does just that. Anger is suffused in this novella, both in characters and themes, giving even its meandering sections raging energy.

In America, Ella is a girl gifted with magical abilities that allow her to levitate, see the future, enter people’s minds, and much more. She mostly interacts with her family or secludes herself. She is Black. So is her younger brother Kev, who is incarcerated outrageously for being a young Black man. From there, the story explores American history, tragedies, and its deeply wrongful consequences and insistence, all within a novella that spans decades, many locations, while never really losing grasp of its narrative.

Kev is a tremendously fully drawn character. His sorrow, pain, moments of camaraderie, and anger, are all developed in ways that deliver a full-forced punch and are conducive to the narrative. Riot Baby has some of the best dialogue I’ve read in quite a while – both punchy and natural – and most of that dialogical brilliance is in Kev’s sections. Meanwhile, Ella could’ve solely been a mouthpiece for the book’s themes, but she’s so much more than that. Her semi-solitary/introspective journey might be more thematic, while Kev’s interaction with many people lends itself more to characterization, but Onyebuchi infuses Ella’s thematic exploration with otherworldliness, giving the themes a sense of magic, albeit an often upsetting and infuriating one.

Riot Baby flows quite well, but not completely smoothly. The story starts out very strong, has a mid-section with both emotionally cutting and meanderingly adrift sections, making me always appreciate Onyebuchi’s craft, but wondering if he had a solid plan of wrapping the story up. The parts I found meandering became worth it and increased in my estimation retrospectively because its conclusion is absolutely gorgeous, as the anger that had gradually built up erupted in something that absolutely befits what came before. I just wish the story could’ve made its lesser bits golden during my reading rather than after.

America might embed oppression into Black bodies, but as Riot Baby shows, it's not the only thing that seeps intergenerationally. Every day there’s a new racial tragedy, but every day there is also dignity and courage. Because oppression doesn’t make most people huddle away and let it eat away at them. There’s a fire that existed before, existed now, and will exist into the future. That fire has become stronger than ever before, and throughout all the terror, there’s hope that it will scorch wickedness and injustices. That feat within the American climate might seem daunting, but it’s possible. It’s not a fantasy, but it is magic.

Bonuses: +1 For a brilliant ending.
+1 For a unique, fluid writing style.

Negatives: -1 For a middle that while still worthwhile, isn't as strong as its beginning or ending.