A failed promise, particularly when it comes to representation. 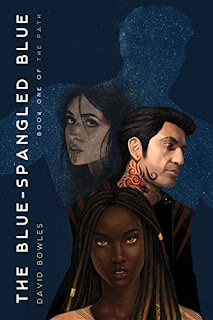 It might be breaking some sort of reviewer code to say so, but let me say it anyway: I wanted to like this book so very much. Despite a hiccup over the initial cover release, it came with an intriguing premise - a political thriller set on a planet grappling with its religious and cultural identity, told through a connection between an academic from Earth and a reform leader from that planet. Its author, David Bowles, has co-founded a grant scheme around the book to support new and emerging BIPOC women writers, called The Path Grant after the fictional religion in this book, and while I'm unfamiliar with any of his other fiction, he translated one of my favourite novellas of 2021, The Route of Ice and Salt. It is, all in all, a cool concept of a novel, from an independent press, with a lot of other cool things around it. And yet. This book was an exercise in frustration from start to finish, in ways which go beyond "small press (originally indie) publication misses the storytelling mark", and as awkward as I feel about it, I think I need to talk about why that is.

(Note: There are spoilers here, but they are the same spoilers as are revealed in the blurb for the second book - read that, or this, at your peril.)

At the heart of The Blue-Spangled Blue is its fictional religion, neo-gnosticism or The Path, whose followers believe that they aren't born with a soul but much achieve one through self-knowledge and enlightenment. Gnostics who follow the Path are almost exclusive to the planet Jitsu, and to the outside galaxy, the Path comes across as a fringe cult, particularly because its more dominant conservative wing opposes the planet making outside connections - a stance taken as a result of their own past as a corporate-owned world and ongoing scepticism about what, exactly, a liberal but hegemonic galactic structure might be able to offer Jitsu. The author clearly put a lot of thought into an intricate, multi-layered political context, though the main ways it's portrayed to the reader - through endless conversations between characters and dry news report-type interludes - made it very hard for me to follow more than the general shape of things. There are some pretty extensive glossaries for a reader more determined than I to pick up the nuance of this galaxy, but on the whole I found myself shut out of a lot of these elements, despite being drawn to them in the book's description.

In the first half, at least, the big-scope political plot is balanced out by a much smaller scale romance between main character Brando D'Angelo, a professor who has left Earth under fraught family and professional circumstances, and Tenshi Koroma, member of a politically (i.e. religiously) powerful family who has broken from the traditions of The Path and is now an architect and a leading voice in the planet's reformist movement. Tenshi and Brando fall in love pretty much instantly, bonding over long, expository conversations about Jitsu, their respective upbringings, The Path and various other pieces of their past, and soon the two are making plans to drive forward reform on Jitsu together, with Brando converting and adopting a supporting role to Tenshi's political career as they both seek religious enlightenment together. Tenshi and Brando's sections are combined with sections from others, including Tenshi's powerful fundamentalist uncle, and the powerful crime boss being supported to esalate violence on Jitsu - sections which often contain more action than the often placid and domestic scenes of married life - but it's Tenshi and Brando who form the core of the story.

Which brings us on to talking about representation in this book. As noted above, The Blue-Spangled Blue  had pushback on its cover release, with many pointing out that centring Tenshi, a Black secondary character, seemed to be disingenuously taking advantage of the "Black Girl Magic" cover trend when the actual protagonist of the book is Brando, a white Italian man. After an attempt to put the character choice in context, which didn't address the criticisms raised, the publisher changed the art to represent four characters, including Brando, Tenshi, another male main character and a woman who is... not (more on that later). While I don't want to speculate on whether Bowles and his publisher were trying to make the novel seem more diverse than it is through the initial cover choice, and the world of the Path is one that does include queer folks and people of colour, I found it hard not to notice that almost all of The Blue-Spangled Blue's main characters, including those with the most power, were male, with the few exceptions mostly being sex objects or nagging mothers. Or that, while Tenshi is pansexual and her most significant ex is a woman, both she and that ex end up in very heteronormative m/f relationships and all of the other significant romantic and sexual attachments in the book are also m/f. There's a disconnect between the way the world of The Blue-Spangled Blue wants to portray itself - as a future humanity that has gone beyond current discrimination - and the amount of unconscious bias, particularly on gender and sexuality, that has slipped in anyway. There are also a couple of real "wait, can we unpack that please" worldbuilding moments, specifically around both characters' childhoods and upbringings, with elements hitting directly onto moral taboos for a 2021 reader. While I don't have a problem with these elements being explored in a context where taboos are different (for example, appropriate relationships between teenagers and adults), this needs to be handled with a lot more care than simply throwing elements in as "it's the future now, things are different!" worldbuilding flavour.

That's all... a lot. But my real issue with The Blue-Spangled Blue is Tenshi, and specifically the fact that this book hinges around around the murder of Tenshi and her daughter in order to further Brando's emotional arc and plot development. Yeah, that's right, that super important black woman character on the original cover? She dies, in a textbook "women in refrigerator" moment, with her own ambitions unrealised, no closure with her family or other relationships, in a move foreshadowed by a prophecy that she's apparently resigned to. The book closes the first of its two sections on her murder, and after an interlude section we pick up eight years later, with Brando now a grizzled supersoldier working to bring down the forces that killed his wife and daughter. To cap things off, he's not even the only man motivated into violence by a dead lover - the other one and his own refrigerated girlfriend got added to the cover to address concerns of misrepresented diversity. This is, to use the technical term, some absolute fucking nonsense. The Blue-Spangled Blue doesn't fall apart without Tenshi - in fact, it picks up the pace a bit, with more action and fewer expository conversations - but it represents such an enormous waste of potential, and it does so by repeating one of the most tired, sexist, garbage tropes in the stable, putting a white male character's emotional pain over an in-process political reform narrative centring a Black woman.

And that's the point where The Blue-Spangled Blue tips from being a book that doesn't hit the mark, to one that I can no longer give the benefit of the doubt to - and you just need to take one look at the sequel concept to discover how replaceable Tenshi is to the overall arc of this series. This is not good representation, nor are its biases explainable through the lens of "it's the future, marginalisations are different now!" I wanted to like The Blue-Spangled Blue so very much, but ultimately it's a failed promise of a book, particularly in the ways that matter the most.