Yasuke celebrates African heritage at the expense of Japan's

Even a mythical reimagining should make an attempt at making sense 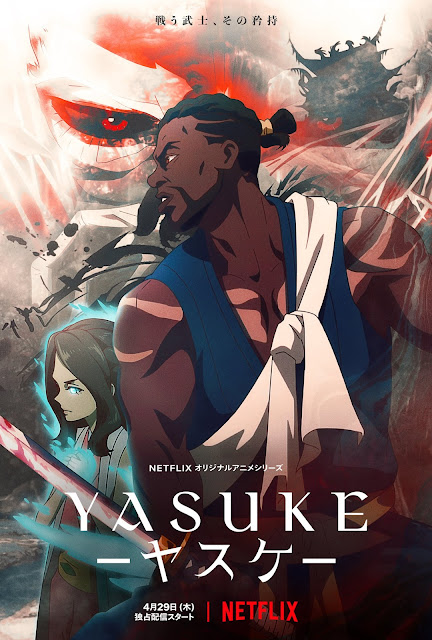 In 1582, Japan was going through a violent process of unification. After defeating almost every other local leader and conquering their provinces, warlord Oda Nobunaga had secured control over almost all of Japan when one of his generals, Akechi Mitsuhide, betrayed him by launching a surprise attack on his castle and causing him to commit seppuku. One of Oda's most loyal soldiers, an African man he had originally bought as a servant from Portuguese traders who had kidnapped him probably in Mozambique, has entered the history books as the first foreigner to ever receive the rank of samurai, but after the fall of the Oda clan, nothing more is recorded about him. We don't know his original name. The Japanese called him Yasuke.

The new Netflix animated series Yasuke imagines the Black samurai twenty years later as a retired old warrior struggling with his inner demons but suddenly called again to battle when a magical girl becomes the target of a weird Christian cult that wants to exploit her powers. The plot gives much more attention to the girl's development as a character, with Yasuke relegated to a glorified bodyguard. In essence, this show has the character of Yasuke, but doesn't cover what he did in life, doesn't explore the significance of his achievements, doesn't give him much of a personality, doesn't rely on what actually made him historically interesting, and isn't even about him.

To make matters worse, the show just isn't very engaging. The animation is flawless, and I have nothing but praise for how the show looks, but the story is bland, generic, painfully predictable, and peppered with unoriginal one-liners that the writers had to have known were not going to impress anyone.

The writers' room of Yasuke has three African Americans (LeSean Thomas, Steven Ellison, Nick Jones Jr.) and one white Canadian (Alex Larsen). Not a single Japanese voice was involved in writing the story. The production used the services of a Japanese animation company, but the credits make no mention of any cultural advisor, sensitivity reader, or anyone who could have provided input to correct the Orientalist stereotypes and historical distortions in the script. By distortions I don't mean flying robots and sorcery. By distortions I mean things like the portrayal of Oda Nobunaga as an enlightened reformer who planned to expand civil freedoms and who was deposed by traditionalists primarily because he dared to knight a Black man. This is not only a blatant butchering of how military rivalries worked in early modern Japan; it's a clumsy attempt to transplant 21st-century preoccupations onto a setting where they don't make sense.

The story does reflect African values nicely through its titular protagonist (for example, the principle that everyone in the community is responsible for every child's safety), but when it comes to representing Japanese culture, all we get are tired clichés like the fixation with honor, as if Japanese society didn't have any other values. In the end, we don't get any tangible hint of who Yasuke was as a person (or even who the writers wanted to say he was) beyond a set of formulaic platitudes.

Yasuke does a grave disservice to a fascinating historical figure to tell a paint-by-numbers escort quest plot that doesn't illuminate his character and wastes the narrative possibilities of a crucial period in Japanese history. It's a real pity.

Bonuses: +1 for beautiful landscapes and expertly fluid animation, +1 for the uniquely bold kind of worldbuilding that allows for a samurai, a sorcerer, a robot and a werebear to exist in the same story.

Penalties: −3 for using almost every Orientalist trope in the box.