Bob Dylan’s Masked and Anonymous is a sideways and sidewise foray for the singer into an alternate America, but one that is still undeniably our own. 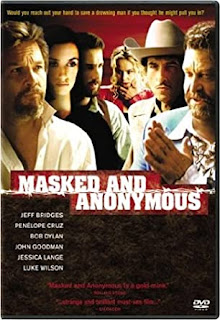 Science Fiction and Bob Dylan are two spheres of interest that don’t at first seem to have any intersection at all. Bob Dylan’s music is grounded in reality, aren’t they?

And yet he said himself in an interview:

And then there is Masked and Anonymous.

You will be forgiven if you’ve never heard of the movie. I had not and would not have, save for a cinephile (and Bob Dylan fan) work colleague who told me about it. It made ~$550,000 at the box office when released in 2003. It disappeared nearly without a trace, although it is available on DVD.

Although the wikipedia page says the movie depicts a  “decaying future North American society.”, it really is something even more science fictional: this is a dark alternate historical North American society, and this essay will explore the alternate history and world that the film depicts. If you aren’t a fan of Dylan’s music, the movie will likely be intolerable to you. Bits of songs, covers of Dylan songs, full or close-to-full pieces dominate the soundtrack and background. Pieces from Time Out of Mind predominate the soundtrack, but there is music from his entire range. The best and greatest of these is when a young girl, Tinashe Kachingwe, sings “The Times they are a Changin”. It’s the most moving part of this entire movie.

But you are here for the alternate history genre elements, not so much the music.

The movie disorients us right from the opening,  immediately by showing an America that most viewers won’t recognize, and then takes it further. Pictures of armed men that look like something out of the Contras, or Farc. Song lyrics in Spanish over unfamiliar scenes: Clips of troops, war, rebellion, destruction. It feels like it is like something from Central America or South America, and yet we quickly learn this IS an America, but not the one we know. It was primarily filmed in some of the poorer slums of Los Angeles and the movie uses that to disorient the viewer throughout the film. This America feels ramshackle, cheap, tawdry, hardscrabble. Even the halls of power when we see them don’t show any of the trappings of that power.

It’s the little touches too in the movie that show what this America is like. The flag: We get glimpses of the alt-American flag at various points. It’s red, white and blue, has stars, but it also has a map of most of North America. Signs in foreign languages predominate. The bus that Bob Dylan rides at one point looks like something out of the third world. Men with large guns are everywhere. The poor and indigent are everywhere in this film. Posters of the President are everywhere, dressed up like a caudillo with a ton of medals. Air raid sirens are commonly heard in the background of many scenes.

The President’s mansion is distinctly NOT the White House, we get that South American caudillo’s palace like look for it. When Dylan’s character calls the mansion, at first, the recording gives a potted history of the building that again, evokes something out of revolutionary South American history, the dates not connecting with US history in the slightest. America looks and feels like a third world police state and that IS the point. This is meant to be America, though, however twisted and dark. The movie’s alternate dark America is meant as a darkest mirror of our own. It’s as if the America of our timeline went to conquer all of Latin America, and become its worst nightmare in doing so but otherwise is the America we know. That is my own private continuity for how this America got to be the way it was. (It makes me think of the book For Want of a Nail by Robert Sobel)

Dylan himself is an alternate version of himself. Here, he is Jack Fate, and he is the son of the President who is extremely estranged from his father. The narrative of Fate’s relationship with the President his father is, if there is a plot to be teased out out of the phantasmagoria that is this movie, is the story of this movie. John Goodman’s conniving Uncle Sweetheart, Jessica Lange’s network executive, Luke Wilson’s bartender and Jack Fate superfan, Jeff Bridges’ reporter, and Mickey Rourke’s President Chief of Staff are the main characters here, but the movie is replete with cameos, as it seems half of Hollywood wanted a short bit in a Bob Dylan movie. Like the rest of this movie, often what they have to say is cryptic, if not downright strange. I’ve watched this movie several times and I still don’t understand why Ed Harris’ character Oscar Vogel is in blackface. No, really.

And yet this movie does explore some things about the history of Dylan, through his character of Jack Fate. Fate’s career stopped, in the timeline of the movie, and he appeared to have been forgotten, much like some of the quiet periods of Dylan’s own career.  The controversy of why he wasn’t at Woodstock gets play here as Jeff Bridges’ reporter harasses Jack Fate on that and a number of topics of music history. There are plenty of other references to musicians of various stripes. Blind Lemon Jefferson’s guitar puts in an appearance, for example, and becomes a physical weapon in the denouement of the movie. In other words, improbably, like a lot of the rest of the alternate history, it hews unreasonably closely to our own history.

After years of not thinking about it, the movie and its imagery, power and aesthetics, and (for what it has) plot first came back in my mind in the era of the previous president and especially in the last year.  The autocratic, vicious nature of the Presidency, and the abuse of power by his enablers and subordinates, really came to life on the screen. The role of the media as enablers of the administration, the “Network”, having a dark power of their own in this movie, made me think of the networks in our own world who lie, cheat and dissemble in the service of the right.

As the nature of how the 2020 election was contested, I thought back to this movie and how the Presidency in this movie is very much not an office decided on by voters, but by those willing to take the power for themselves. The America of this movie seems to suffer a continual civil war, something that may yet prove to be a dark prediction of our future. (This puts me in mind of Claire O’Dell’s Janet Watson novels for the same dark view of America).

The callous killing of George Floyd felt like of a piece of this dark alternate America where there are, if anything, even more guns and violence than in our own world’s America. And as I ultimately saw the injustice that Fate suffers at the end of the movie,  I again thought about the inequities of criminal justice in our own America. There is a dark and abiding cynicism that anything can ever change and that even individual action doesn’t do anything (one minor character talks about having gone from the rebels over to the government forces, and no one even noticed he switched sides). It’s an consistently downbeat movie about the America it depicts, and thus reflects on our own.

But in the end though, is Masked and Anonymous good science fiction? Is it a plausible and good alternate history? No. It’s really alternate history by means of dream, surrealism and illusion. The alternate history of Masked and Anonymous ultimately does not hang together as a narrative. Some of the cameos really are just actors wanting to have lines with Bob Dylan and not much else. Other bits, like the aforementioned Oscar Vogel, defy any rational explanation. The movie is a dark dream of Dylan’s life, and America’s as well and nothing more.

Is it worth watching? If Dylan’s music does not turn you off, and you want a wild and confusing, incoherent trip into an alternate America, and play “spot the cameo”, then  yes, the movie is worth watching, at least once. If for anything, again, for the best version of The Times they are a Changin you will ever hear and see. As for me, I find the movie strangely and weirdly comforting, perhaps because it shows an alternate America that is our own, and yet, measurably far worse.