Jupiter's Legacy wants to question the Greatest Generation, but has no clue how

This show is convinced it's telling a Godfather-level family saga, but it's just God-awful 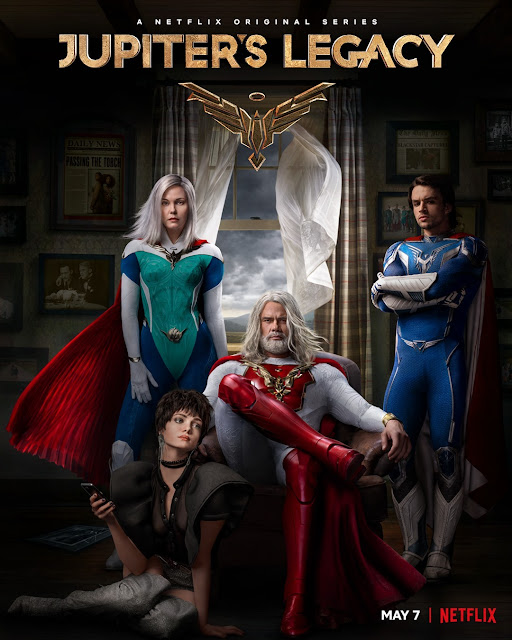 It's better if you don't waste your time with Jupiter's Legacy. I can't speak for the original comic, but its live-action Netflix adaptation is an embarrassment to watch.

In a world of superheroes and supervillains, the legendary Superman Utopian has led the Justice League Union of Justice for ninety years. However, the world he's defending doesn't resemble the one he used to fight for, and he has doubts about the readiness of his son and presumptive successor, superhero-in-training Paragon. It's the same kind of story you could tell about monarchs or CEOs or mob bosses, but this show decided it needed spandex. So that's where we are.

What passes for an inciting incident, because it's treated like it should have world-changing consequences, but turns out to be supremely uninteresting, is Paragon's choice to smash the skull of supervillain Blackstar just before he could detonate his antimatter heart and vaporize millions of people. When public opinion sides with him, his father is at a loss for what to do, because we're supposed to believe that an organization led by the cheapest Vito Corleone knockoff in the Overbearing Fatherly Expectations department has not once in ninety years of superpowered crimefighting killed a bad guy.

The show doesn't grasp the difference between a last-resort killing in a case of immediate urgency and the unlawful killing of a hostile combatant in ordinary circumstances. Paragon's actions definitely need to be scrutinized, but the prosecution doesn't have a case here. The real-life discussion on the abuses of law enforcement cannot be transplanted onto a fist vs. nuke situation. It's true that ethical theories are tested in the extreme scenarios, but whatever point might be ascertained from Jupiter's Legacy's contrived thought experiment is useless for the real-life discussion.

Look, no writer is perfect. From time to time, a story will trip over its shoelaces in the treatment of a sensitive moral issue. But Jupiter's Legacy trips, slips its shoes on dog poop, lands on a rusty nail, breaks an ankle, tumbles down a field of thistles, scrapes off its kneecaps, smashes an unsuspecting anthill, zooms past a cliff, and cannonballs headfirst into shallow water. This show was made without even the attempt at meaningful storytelling, but with all the pretense of having done so. It's not only the mishandling of the theme: the plot has no direction, and the worldbuilding exists in a fragile bubble.

In general, there's something off about the whole thing, productionwise. The green screen is amateurish, the cuts between scenes are confusing, the old age makeup is too obvious, the shaky cam is irritating, the sound volume is all over the place, and the fight choreography has no sense of emotional pacing. Josh Duhamel is the wrong actor to carry the weight of an aging patriarch resisting change in a ridiculous white wig, while Leslie Bibb doesn't seem to know another facial expression than shocked surprise, and Andrew Horton puts so much intensity into his lines that it feels like he's trying to play a character half his age.

And then there are the dialogues. Where do I even start with dialogues so cringeworthy in their directness. These characters don't live in their roles; they declare their roles to each other, as if reciting from the show's promotional blurb. Scene after scene presents a character saying what we all can see to a character who doesn't need being told. This pile of writing mistakes hurts the show's ability to carry any depth. There's nothing to find beneath what's plainly said. There's no complexity, no layers. This is a story that makes no demands on the viewers' part.

Jupiter's Legacy tries to address the question of excesive force, but its convoluted metaphors end up sending problematic messages. In the larger context of the institutional failures of American policing, the show's scriptwriting reveals a staggering lack of awareness. The show not only doesn't understand its own theme; it doesn't know what world its viewers live in. Worse, it carries itself like it's saying something terribly important about America's generational burdens and the eternal vigilance it takes to uphold the rule of law. But it's not saying anything. It's a collage of fragments of a story that is nowhere to be seen.

Bonuses: +1 for Ben Daniels, the only good casting choice in the entire show.