"Pacific Rim: The Black" has an OK story, but it's hard on the eyes

This tale of loneliness and persistence goes to some familiar places and has a few interesting ideas, but the animation looks painfully unfinished 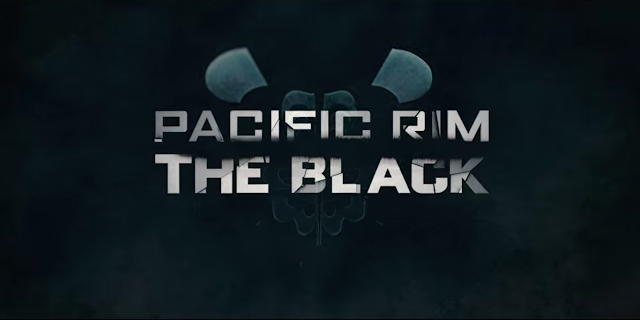 (Confession: I'm not a fan of Pacific Rim. I know most people's reaction to the announcement of the first movie was along the lines of "Hell yeah!", which I get. I know that its aesthetic knows how to push the right buttons. In my case, my reaction was a bewildered "But why?", and the reason is that Pacific Rim is made of pure, distilled nostalgia, and I'm allergic to nostalgia, so I didn't see a need for this movie to exist. I think it's fair to you that I start this review by being open about this position I have. I don't think it's a bad movie. It's just not my thing.)

Pacific Rim: The Black is an animated series that continues the plot after Uprising and pulls a bit more of the curtain of the monstrous alien invaders that have been threatening Earth since the first film. I was skeptic about the viability of any sequel to the original Pacific Rim; like Terminator 2 or Return of the Jedi, it raises the obvious question "But they already won, and the movie said it's final, so what's there to tell next?" To my surprise, Uprising did have something to add to the story, and the direction in which it chose to expand its monster lore has room for further intrigue.

To my bigger surprise, what The Black adds to this setting has good potential. But its ideas tend to stay at the "potential" phase and don't enter much into the "execution" one. I realized this when I noticed it only had seven episodes of less than thirty minutes each, and I wondered why it wasn't a full-length movie instead. The answer is that The Black doesn't tell a complete story in this season. It's designed to set up several future plot developments, which is fairly normal in any first season, but the actual story gives us so little that one can't avoid feeling shortchanged.

Not that the story even works. Much of it relies on just-so contrivances. In the first episode, Hayley, one of the protagonists, accidentally discovers an entrance to a military facility that was hidden below her community in an oasis in the middle of the desert. She didn't make any particular effort to search for places any of them hadn't walked by in the five years they'd been living there. The all-important secret door was just... there. In the second episode, when Hayley and her brother Taylor leave their giant robot to explore the streets of a city on foot, the monsters they meet are the right size for a chase scene with teenage humans.

Causal logic is not a strength of this show. The premise is that, even after the alien invasion was averted in the first movie (and averted again in the second one), interdimensional rifts are opening again, but this time they're not at the bottom of the Pacific Ocean, but on land, in the Australian desert. We don't get any explanation for this change, and I suspect the only one is that they wanted to tell a road trip type of story this time. The series starts with most of the continent already abandoned and our protagonists cut off from the world after the disappearance of their parents. They don't know whether the coastal cities are safe anymore, but their discovery of a battle robot attracts the attention of a beast that rampages through their oasis, so the only option they have left is to search in the direction their parents went. Inevitably, because this is Australia, the show gets a Mad Max feeling that gets more obvious with the introduction of Shane, the human villain, who commands a private army of pirates/smugglers/survivalists. And then all causal logic is forgotten, because this villain is only capable of making choices that sabotage his own objectives.

The road trip structure serves to showcase the Australian landscape, but the artwork is a mixed bag. The animation can have really spectacular details that are done no favors by the clumsy parts. Hair shines as if it were made of plastic, while metallic surfaces appear dull as leather. The palette of grays is a favorite of the show’s artists, and it puts unnecessary strain on the viewer’s eyes. It’s hard to follow the action on screen when the color of a character’s jacket is almost the same as the wall behind him, or the color of a monster’s body is almost the same as the background night sky. When a basket of potatoes or a shirt are given gray smudges to represent dirt, they look instead like they’re half-transparent and we can see the ground through them. The effect would look cool if it weren’t so distracting and obviously unintended. In a very strange instance in the first episode, a female character’s breasts are foregrounded in profile while she’s talking to another character in the background, and the gray on her shirt gives it precisely this transparent look that completely ruins an already ill-advised shot. Other scenes use the lighting on surfaces to create the impression of depth, but with so few gradations that the screen is filled with large, ugly blotches of gray. Gray next to gray. Gray over grayer. Green or red so desaturated they may as well be gray.

This lackluster handling of color is even more jarring in combat scenes. When fighting titans hit the ground in the first episode, the rendering of the wisps of dust looks like a datamoshing glitch. Low contrast + shaky cam = a very confused and dizzy viewer. This gets especially disappointing when one notices the beautiful variety of landscapes. The second episode achieves an amazingly detailed ruined city with delicate dust effects, and the third has water splashes that move as if by real physics. But then a giant salamander rises from the water, its vaguely brownish belly nearly indistinguishable from the rocks next to it, and all the visual charm is gone. The amount of work that was put into the scenery is wasted on the featureless blandness of the creatures that have to move in it. This really hurts. When the clouds are painted with so much care that you can tell apart the cirrus fractus from the cirrus spissatus, you know these artists know how to draw well. They just don’t do it consistently. The fourth episode revisits the sandy landscape of the first, and there’s that glitchy dust again, only to be followed by a jump cut to the ruined city and its perfectly rendered dust, as if the teams in charge of animating different settings had not been in communication with one another. The big, climactic explosion in the fourth episode looks childish, while the fifth has a long scene with expertly done layers of fire and smoke that puts it to shame.

Although the plot won't earn any awards, it does have valuable things to say about generational disillusionment. Our protagonists owe their lives to their parents' sacrifice, but have had to survive on their own for years, and now that they're learning to give themselves the protection that their parents should have provided, they're starting to appreciate the difficulty of the task. In direct opposition to this strained but loving relationship, Mei is a child soldier with a long abusive history under her surrogate father, the heartless Shane, who later we learn has been manipulating her to make her stay with him. To add a strong touch of tension to this theme of painful parenthood, the last episode reveals that the aliens now understand enough about human relationships that they've sent one of their own to infiltrate Earth in the guise of a fragile child, weaponizing our protective instincts against us.

My comparison with Mad Max brings another angle to the worldbuilding: starting from Mad Max 2, political regimes and borders have vanished to the point that the movie may as well take place on another planet. In contrast, the events of Pacific Rim happen in the very near future, and it's impossible to ignore the real-world associations that come to mind as a consequence of the decision to set The Black in what the characters still call Australia. The producers should have been aware that any story that features loss of land and orphanhood and is set in Australia is going to evoke the historical context of the violent displacement and systematic child kidnapping done to Aboriginal peoples, but The Black doesn't include any explicitly identified Aboriginal characters who could have provided a fuller exploration of that inevitable theme. And don't get me started on the problems with a story about refugees in Australia that doesn't acknowledge Nauru.

So, the Pacific Rim franchise has never had the most robust worldbuilding. But it knows how to hit the emotional mark. The need for telepathic connection between two pilots was one of the most out there elements about the movies, in that a credible in-universe justification was never given, but it was a powerful symbolic statement about the value of emotional vulnerability and mutual support in the face of danger. In the setting of Pacific Rim, shutting off your feelings gets you killed, but exposing them to the wrong person leaves scars. Shane exploits this mental connection to edit Mei’s memories and keep her under his control, and it's the protagonists' willingness to be open with each other that helps them win the day. The fact that no one in Shane's private army is capable of such honesty is an effective shorthand for who these people are and why even without Shane we shouldn't root for them.

A full assessment of what The Black brings to the table will have to wait until it actually completes an arc at some point in the future. For now, the mysteries it presents are good enough. There's a weird religious cult that seems to worship the giant monsters, and we still don't know what happened to the protagonists' parents. But the makers of the show are going to have to work hard to improve the quality of the animation. I'm sure those who truly enjoy the giant fights of Pacific Rim would appreciate being able to tell what's going on in the screen.

Bonuses: +2 for beautiful scenery, +1 for a continuous thread through the theme of parenthood issues, +1 for a creative twist on the franchise mythos.

Penalties: −2 for inconsistent visual quality, −1 for too much uncanny valley, −1 for a flat villain, −2 for ignoring the questions raised by the choice of setting.