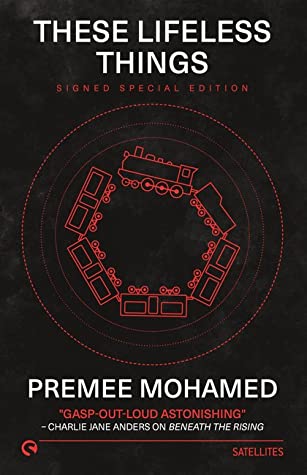 A post apocalyptic, post invasion novella that keeps its secrets close to its chest in a way which underscores the sheer terror and confusion that might follow a total collapse of society, These Lifeless Things tells the story of two women 50 years apart. One is Eva, a survivor living in a city which has been taken over by mysterious, extradimensional invaders. The Them have wiped out the vast majority of humanity, and Eva and her small band of fellow survivors live constantly on the edge of an enemy which kills and changes their environment in strange, arbitrary and apparently unstoppable ways, as well as dealing with the more mundane aspects of keeping themselves fed, warm and alive in the ruins. Eva's story is discovered in a "diary", long after the catastrophe, by Emerson, a researcher whose interest in the history and anthropology of "the Setback" puts her at odds with her colleagues, who are studying the science of the catastrophe and consider her work at best a waste of time, and at worst a drain on resources. Emerson knows there is unlikely to be a happy ending to Eva's story - people from the cities simply didn't survive - but her research into the locations and actions of Eva's group, fifty years ago, is combined with a feeling of personal connection that can't help but spill over into hope.

The set-up makes for a strange, sad sort of story, as alongside Emerson we hope against hope for answers to Eva's fate, or even something that might help contextualise her story. Making things even more compelling are the very human interpersonal dramas in both Eva and Emerson's groups, although these also defy any sort of neat narrative tie-up in both scenarios. Eva's relationships perfectly underscore the exhausting misery of the trauma she is going through, her personal thoughts full of crushed desires and hopes that she's too traumatised and exhausted and ground down to even consider acting on even as she puts her life on the line for a different plan. Compared to what Eva is going through, the petty cruelties of Emerson's fellow researchers should feel less important, but because her search for knowledge is tied up in our feelings about Eva and our desire to understand her story, the "future" side of the tale ends up just as engaging as the past. I don't always love open-ended stories but this is one I would very much recommend giving time to. 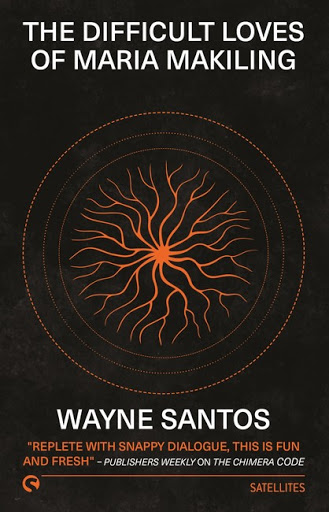 Santos' reimagining of one of the Philippines' most notable Diwatas is fast, funny and packs a truly impressive array of cultural references - from colonial legacies to Alastair from Dragon Age to Imelda Marcos' shoe collection - into its short length. Maria Malihan is living what she thinks is a relatively ordinary life as a concept artist for a big game studio, excited as things start getting serious with her barista boyfriend Tate even as she tries to fend off creepy not-quite-legal-harassment advances from both her boss and her personal trainer. What she's not expecting is for her relationship to become the catalyst for said boyfriend to be almost killed in a car accident, then possessed by a strange spirit, and for Maria herself to suddenly remember that she's not simply Maria Malihan, a Canadian artist with limited connection to her Filipina heritage, but a reincarnation of Maria Makiling, the Diwata of Mount Makiling, who has been playing out the same tired tragedy with her repeatedly-murdered lover and the immortal forces trying to get him out of the way for their own purposes, generation after generation. To save Tate, Maria starts out on the same path to conquest as she always does, but this time things don't quite play out as they always have, and with a new ally in tow, she sets out to break the cycle the group have found themselves in and get herself and Tate the happy ending they finally deserve.

This kind of snappy, absurdist speculative fiction always makes me a bit nervous - there's so much that could go wrong when so many jokes and references need to land - but Santos really nails it here, spinning a story that takes us from Toronto to Luzon and back with just the shortest of detours through the mindscape of Margaret Atwood (whose recurring role is small but delightful). Somehow, the silliness manages to sit neatly alongside some light-touch but chewy reflections on colonialism and diaspora identity, and while some of the parallels are a bit on the simplistic side, the overall result is a novella that took me by surprise with the issues it was covering despite the lighthearted tone. Not everything landed for me (one aspect of the ending was a little too quick and convenient, though I didn't dislike the idea behind it), but overall I had great fun with this. 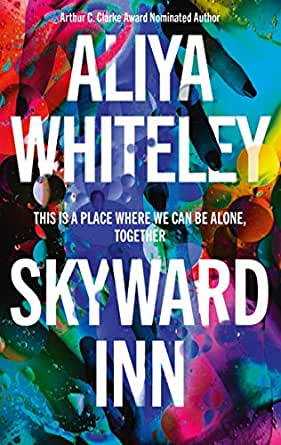 Aliya Whiteley is an author I always follow with interest - The Beauty was an excellent novella, and The Loosening Skin took a great premise to some interesting places despite its rather odd structure - so I was intrigued about where this new novel would take things. What I got is a novel that started off with a quiet, unassuming premise, a pair of characters in a deliberately small setting dealing with deliberately small problems, which then proceeded to go in an absolutely wild direction until I wasn't even sure what I was reading any more. Is that bad? Is that good? I don't know! But don't settle into the first chapters of Skyward Inn thinking "this is going to be a fun, gentle slice of life SF" unless you enjoy being very, very wrong.

If it's not slice of life, what is it? Skyward Inn is the story of human war veteran Jem, her alien partner Isley, and her (human) son Fosse, all of whom live in The Western Protectorate, an area of western England that has seceded in order to be a full on microcosm of West Country-style Little Britain, complete with rampant distrust of outsiders and its very own border wall. Jem and Isley run the Skyward Inn, a pub in which the residents of the Protectorate gather to meet, drink and play darts. As a member of the alien Qita, who humanity conquered on their home planet years ago, Isley is just about tolerated within the xenophobia of the protectorate, but from the very beginning even Jem highlights the Other-ness of having an alien within her midst. When Won, another Qita, arrives seeking help, she sets in motion events that destablise the Protectorate from the inside out, at first running alongside what feel like more traditional pastoral conflicts like "which family member is going to inherit the farm", before the alien-ness of the Qita and the lingering questions around their original surrender to humanity engulf everything else. From that point, the story turns into biological horror interspersed with "first" contact documentation, in a way that is intriguing but never quite convinced me that it was a natural continuation of what had gone before. I think I can see what this story was trying to achieve by juxtaposing the small insular community of the Protectorate, grappling with its own version of a first contact history that seems too good to be true, with a present that has implications for the whole of humanity (but still filtered through that community) - it just never came together in the way I was hoping. However, I know that for other readers, this was a home run of a book, so your mileage may vary - regardless, Aliya Whiteley is an author who never fails to give me something weird and magical, and I'll be looking out for whatever comes next with just as much hope.