Interview: Suyi Davies Okungbowa, Author of Son of the Storm 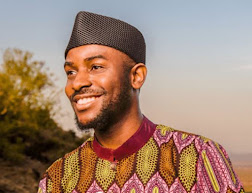 It is with great pleasure that I welcome Nigerian author Suyi Davies Okungbowa, author of the highly anticipated Son of the Storm, to Nerds of a Feather. If you are an avid reader of online short fiction, you've likely come across Okungbowa's short fiction and essays at Tor.com, Lightspeed, Fireside,Apex,Omenana, Strange Horizons, and the anthologies BreatheFIYAH,  People of Colour Destroy Science Fiction and Year's Best Science Fiction.  His debut novel, David Mogo, Godhunter, came out in 2019.

I've been intrigued by Son of the Storm since I first heard about it: a West African inspired world, scholars who can't leave well enough alone, secret histories and ancient magics, a woman from a land that doesn't exist, terrifying beasties, political scheming, and the exhausting emotional labor of having to explain and justify yourself. That ticks a lot of my  boxes, how about you?   The plot of the novel follows scholar-jali  Danso, who is supposed to be preparing for his upcoming wedding and a career as a storyteller.  And then Danso meets Lilong, who hails from a place that shouldn't exist.  Son of the Storm features complex characters, sprawling world building, discussions on how history informs our present, and explorations of privilege and power.

Okungbowa was kind enough to take me behind the scenes of Son of the Storm, we discussed the trilogy's inspirations, my fascination with how people interact with Lilong, what life is like in Bassa, where Okungbowa got to have some fun in the manuscript, and more.  You can learn more about Okungbowa's work at his website, SuyiDavies.com and or by following him on twitters where he is @IamSuyiDavies.  If you're interested in the virtual book tour of Son of the Storm, click here for more information and event registration.

NOAF: Congratulations on your forthcoming novel, Son of the Storm! What's the premise of this book?

Suyi Davies Okungbowa: Son of the Storm is the first in The Nameless Republic epic fantasy trilogy, and it’s set on the isolated continent of Oon, which is inspired by various West-African empires of the middle ages. It follows Danso, who’s a clever scholar in Bassa, the greatest city on the continent. But he’s too clever for his own good, and gets his nose into things he shouldn’t, two of which spark the events that drive the novel. First, he re-discovers and inadvertently memorizes the long-lost journal of a mad Emperor that speaks of long lost magic and non-existent peoples. And then he also stumbles upon Lilong, a warrior from an island that should be extinct. These discoveries set things in motion that could be the rise of Bassa and the continent, or the fall of both. Especially when Esheme--Danso’s betrothed, but also a fixer’s daughter--gets caught up in these events.

NOAF: What were your inspirations behind Son of the Storm? What were you thinking about while you were writing it?

SDO: This book, and in tandem The Nameless Republic as a series, was born of my desire to tell stories that drew on those I’d heard about the history of Benin City while growing up there. I realised, over time, that there was a shared connectedness between the stories of kingdoms and empires and trade and conquest that orbited my city, my country, my continent, and many of those stories had been cut off after colonial influence. They were already wonderfully fantastic in nature, and it was only a matter of time before they inspired me to write one of mine.

But more importantly, I wanted to tell a nuanced story, one that showed the complexity and messiness that comes with fighting for land, resources, power. I didn’t want a story that just paints over the dominant forms the fantasy novel comes in with an airbrush that says “Generically African.” I wanted a people who were morally grey in their own way, who didn’t separate neatly into a good/bad dichotomy. I wanted to tell a story that could be Oon’s alone. So while there is the strong influence of West-African concepts and cultures and languages and ideas running through the story, this is really a story about the people in this particular world, their many challenges, and how they struggle to survive them. 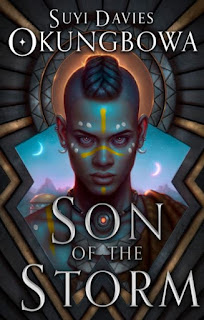 NOAF: I was so struck by the mention of a character who comes from a set of islands that are thought to not exist. Obviously Lilong came from somewhere! How does that work in a story, where a character says “I'm from this place”, and other people maybe think she's lying because in their worldview, that location doesn't exist?

SDO: To start, I’m sure Lilong would punch anyone in the face who said that, haha. But really, most of the reactions are less of, “You’re lying,” and more to the tune of confusion or perplexity. “Huh? Are you sure?” Probably followed by, “Tell me what that’s like.” To Lilong, that would probably translate to, “Convince me that where you come from is not as they tell us it is in the stories.” And then she has this burden of trying to correct all these impressions, and after a while, being the spokesperson for a whole people in this way tends to weigh on a person.

I personally could relate to this aspect, having moved around a bit and met many people who, after a bit of a chat with me, discover I’m Nigerian and then go, “Huh.” I watch them try to frame the “Convince me” question in a variety of ways. It’s fascinating, balancing that weight each time: I want to educate you, but I also don’t want to be that spokesperson, you know?

Anyway, in Lilong’s case, they’d mostly just try to murder her, because folks from where she’s from are supposed to be “savage.” But it never ends well for those folks, hehe.

NOAF: What is the culture like in Bassa? Danso is about to embark on the adventure of a lifetime, but what might have the rest of his life been like in Bassa, if he'd never met Lilong?

SDO: Danso is a jali, a Mandé word (French-influenced alternative: djéli) for the more commonly known concept of a griot. This means he’s a professional storyteller, and has spent a large part of his life learning to be a sort of scholar-historian. He has a gift for memory, so is poised to become one of the greatest. Most of his life has been spent between the University of Bassa, the jali guild, and meetings at Bassa’s Great Dome. In Bassa, this is quite the elite life, as only the highest castes are allowed to practice the art.

But Danso also simultaneously belongs to the lowest caste, where folks of mixed heritage end up. So he gets to experience the other side of Bassa as well--discrimination, injustice, limited access. His life is uniquely complex in this way. If he’d never met Lilong, he would probably have become married to his betrothed, Esheme, and lived a probably unfulfilling life. But of course, the moon gods had other plans.

NOAF: So, I heard some unreal creatures and terrors show up. Can you tell us a little more about that?

SDO: I’ve probably said this in the promo, so I can say it here: there’s a lightning bat. A fearsome, massive beast with the ability to control lightning and track folks carrying magical stones. So, er, not the kind of beast you want to encounter. Which means, of course, I would be remiss not to have to make my characters encounter said beast, wouldn’t I?

NOAF: What was the most fun part of Son of the Storm to write?

SDO: Building the world, to start. I had such a swell time asking myself of Oon, the kinds of questions every worldbuilder would: why would they do this instead of that?

Mixing and matching fictional and real-life reasons in my answers to these questions, so that the line between both became blurred, was fun. Also, writing those characters who only appear once or twice but spice up the page whenever they do--Danso’s triplet uncles come to mind--is always fun.

NOAF: What books and short stories have you been enjoying lately? Have you got anything to recommend to our readers?

SDO: I recently read Djèlí Clark’s new book, Ring Shout, which I found super intriguing. Much of its overtones reminded me of Lovecraft Country, but Ring Shout is its own thing, and I’m unsurprised it was swiftly optioned. I’ve been slow-burn reading Rivers Solomon’s An Unkindness of Ghosts, and that is a heavy book emotionally, yet robust in ideas and uplifting in other ways. Lastly, I’ve been reading a lot about how boats were used in West Africa, as I work on Nameless Book #2. Expect to see some voyage on the waters, then!

NOAF: Thank you so much Suyi!