A story of trauma, transformation and healing with a protagonist whose journey is impossible not to root for 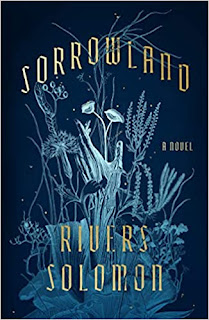 Having brought us a generation ship space opera with US chattel slavery race dynamics, and a story of first contact and alien society with the Black merfolk of Drexciya, I went into Rivers Solomon's third book with expectations of something similarly genre bending and thoughtful, but otherwise with little expectation of whether Sorrowland, with its intriguing, gothic set-up, would twist towards science fiction, fantasy, realism or some other direction entirely. It's a mild spoiler to answer that question in full, but what I can confirm that Sorrowland is full of magic in its most basic sense: events and locations that seem mundane on their surface but are transfused with mythical qualities. At the centre of it is Vern, Sorrowland's protagonist and one of the most engaging, interesting protagonists I've ever spent a book with. From the first few pages of Vern's narration, I was hooked on her character's voice, and in following her journey through its heartbreak and discovery I was desperate for things to work out in some for her.

Sorrowland opens with Vern as a pregnant teenage girl escaping an unknown "fiend" in the forest near Cainland, the commune compound where she grew up. Vern's first act is to give birth in the midst of making her escape, taking her twins Howling and Feral - both referred to with he/him pronouns, though their gender is left ambiguous - to live in the safety of the woods. Vern is able to survive almost exclusively on what the forest provides, her inexplicable survival skills providing the first hint both of extraordinary abilities and her strength of character - but the Fiend continues to pursue her and make its presence known, and eventually it becomes clear that at least some of what Vern needs is outside of the forest. So she leaves, first temporarily, finding comfort with a woman called Ollie; and later, while seeking her closest friend from the compound who left under mysterious circumstances, with a more permanent support network. By the point of her departure, our suspicions that Vern carries supernatural abilities of some form have been confirmed, and Vern herself is grappling with a transformation that she can't fully understand, but which is clearly linked to her former life in Cainland.

As a cult survivor, Vern's experiences in Cainland permeate every facet of Sorrowland's story, from the overt - her past, and the circumstances in which she ran away, are explored throughout the book's first section - to the way she expresses her political and cultural beliefs, to the contrast between Vern's upbringing and the start in life she gives her own children. Cainland is a Black commune built to offer its residents an alternative to white supremacist society, but by Vern's time this mission has been corrupted by authoritarian religious patriarchy which forcibly cuts its members off from outside communication and preaches hate against queer folk while enabling child marriage for its leaders. As an albino intersex girl with an exclusive attraction to women, and strong opinions about the world around her, Vern finds it impossible to mould herself to the expectations of the compound, and its no accident that Howling and Feral are brought up in an environment where curiosity is encouraged and only curbed when it would bring immediate danger. This being Rivers Solomon, of course, Cainland doesn't exist in a political vacuum, and as Vern's personal transformation is explored, the factors that made that compound what it was also come into play.

Running in parallel the physical repercussions of Vern upbringing is her emotional journey, one which involves grappling with the trauma of Cainland and learning to live with (and embrace!) the parts of her which it tried to suppress. A large part of that is Vern's sexuality, and Sorrowland has some great (consensual) queer sex, including a poly encounter towards the end of the book which would be a spoiler to begin to describe but made me go "ohhh???" in a very intrigued and thoughtful way. (Maybe also some other emotions). Finding accommodation for her disability (Vern has nystigmatus due to her albinism, which reduces her vision and stops her being able to read) and gaining access not just to books but to people who support her intellectual curiosity and interests is also a significant - and heartwarming - part of her healing towards the second half of the book. But Vern's greatest emotional challenge, and the part that propels the book to its eventual, unexpected climax is reckoning with the way the cult has negatively affected her relationships. Vern's feelings towards her mother, who took her to live in Cainland in the first place and allowed her to become a child bride; her childhood friend Lucy, who left her abruptly with only an address in a book she couldn't read to track her down; her allies outside the compound, especially Native woman Bridget and her niece Gogo who offer Vern and her children an eventual home; and of course Vern's precociously smart, curious, thoughtful children: all these relationships are complicated and nuanced and come together in a messy but optimistic vision of healing, however imperfectly, from trauma. While its ending was more high-stakes than I anticipated, the work Sorrowland puts into its emotional journey had the biggest payoff for me, and I particularly enjoyed the portrayal of Howling and Feral as their own well-rounded human beings even at a young age, with relationships with adults which go beyond a one-way system of care.

Sorrowland covers so much ground, and a lot of it is best experienced without knowing what's to come, making it a difficult book to really sum up in a review. This is a work of thoughtful, passionate brilliance from a writer at the top of faer game, and trying to capture that in a 1,000 word one-sitting review is like trying to describe the ocean to someone who has never experienced water. This isn't an easy book - if you're familiar with Solomon's previous books, you won't be expecting that anyway - but if you have the time to devote to it, Sorrowland's journey is a powerful one and ultimately something that left me with a great deal of hope for its characters. And I simply cannot rate Vern highly enough, in all her prickly, passionate, confused glory - her journey is one that will stay with me long after I put Sorrowland down.

Bonuses: Packs so many layers of nuance in depicting Vern's struggles and the forces she is up against