Microreview [book]: The Galaxy and the Ground Within by Becky Chambers

The final Wayfarers novel is the opposite of a big finale number, and that's more than OK 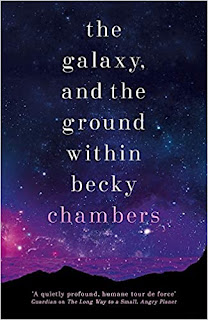 I'll level with you, dear readers: somehow I haven't written a full length book review in a month, and I forgot how reviews start. So I'm just going to start by going "what IS reviewing?" and then follow up with "why have I had some books on my review pile for over a month without writing about them" and then we'll see where we go from there. One such book is The Galaxy, and the Ground Within, the last in Becky Chambers' Hugo Award winning Wayfarers series of spacefaring novels starring people who, despite the challenges of the world they live in, choose to be fundamentally kind and generous with each other and see where that gets them. In another series, I'd have gone into a final instalment expecting something on a grander scale than the lead-up: a big budget finale episode of a book featuring More! of Everything! with high stakes and happy tied-up plots for everyone involved. This being the Wayfarers, I went in with no such expectations and it's a good thing I didn't, because in scale this is the smallest of the Wayfarers books: a tiny, isolated story in a small part of the galaxy, featuring a few transient characters who intersect for a few days and then go their separate ways once more. It defies all concepts of what a finale should be, and I have had no idea how to write about it, or, really, how I feel about it.

The book takes place on Gora, a planet whose economy is entirely built around being a rest stop for people passing through its various space gates to other parts of the galaxy. As Gora itself is an airless rock, those rest stops all take the form of various domes on the planet's surface, where travellers come down for the kind of hospitality experience one would expect at a transit hotel: a clean room, a decent meal, some supplies for their ship and maybe a weird souvenir from the gift shop. One such generic rest stop is owned by Laru (think the Mystics from Dark Crystal but fuzzier) Ouloo and her child Tupo, and on what is supposed to be a completely average day they have three guests arrive: Pei, an Aeluon on her way to visit her partner (Ashby of The Long Way to a Small Angry Planet),  Roveg, an insect-like Quelin trying to keep a mysterious urgent appointment, and Speaker, an Akarak whose role within her otherwise insular species is to interact and trade with outsiders. Unfortunately for all, this very average day is disrupted by a disaster that takes out much of the satellite network around Gora, leaving everyone stranded in the rest stop with nothing to do but rely on each other and wait for better news.

With the inciting incident set up, The Galaxy, and the Ground Within proceeds to do absolutely nothing to invoke any significant tension for the majority of its remaining length. Nothing bad happens to any of the characters or in their immediate vicinity as a result of the disaster, and the satellites are fixed offscreen with some cheerful official network updates serving as interludes between sections. Instead, the substance of the book revolves around the way these aliens interact with each other: from endless snacks (you will not forget that Ouloo is in the hospitality industry for a single second!) to dance parties to heartfelt conversations with teenagers about following their passions, the book lets these five aliens tell the story of why they have found themselves in this transit point, and where they're going next. The shared strand among the adults is that all are in some way exiled or distant from their species' expectations and communities. Pei, as readers of A Long Way to a Small Angry Planet will know, is from a species which considers inter-species romance a taboo and reproduction a responsibility, but wants to arrange her life in a very different way. Roveg's species are notoriously xenophobic and only those exiled are free to travel, meaning that his existence among the group means that he has been ostracised from his family and home for reasons that are explored through the book. Perhaps the book's most interesting strand is that involving Speaker and her species, the Akarak, methane-breathers whose planet was terraformed out of being habitable and who have never been offered just reparations or acknowledgement by a galaxy which continues to find them too inconvenient to accommodate. Because the Wayfarers books don't deal at the scale of political change, Speaker's story gets the least satisfying resolution of the lot, but it's an interesting wrinkle to add to the other background injustices and legacies which form the backdrop of Chambers' otherwise rather benign galaxy.

So yes, there's a reason for everyone to stay in one place and get to know each other longer than they otherwise would, and they eat some interesting snacks and have a dance party and tell stories, and then a bad accident does happen (as a result of the different forms of life support the different species need to survive) and everyone is kind of sobered and made to consider what they Really Want after this as a result of the accident, and then things are resolved with no lasting consequences and everyone goes off to live a slightly better version of the life they would have lived anyway. Which is to say, there's a way in which reading The Galaxy, and the Ground Within is a rather underwhelming experience. Becky Chambers has written enough books at this point (and I have read them) that it's obnoxious to go into them expecting something to happen in the traditional sense, but even by that metric, there's not much going on here: just a small story in a small corner of the galaxy, where individuals come up against overwhelming cultural dilemmas and encourage each other to solve them through some combination of being true to oneself and making good art.

And yet, you know what? It works. It works because the idea of solving problems through individual empathy, while not a replacement for science fiction that grapples with wider systemic change, is just as radical an idea to explore, and it's also an extremely enjoyable wish fulfilment fantasy. It's hard to put into words what Chambers pulls off, and I can't shake the feeling that it would be even better in a video game or another interactive medium where gentle, character-driven exploration can feel more natural - but Chambers definitely pulls off the intended effect here, and I greatly enjoyed the experience of reading this book even as the "how" of its engaging me kind of didn't make sense.

The Galaxy and the Ground Within won't win over anyone who doesn't already like what Chambers does, and it's not your average series finale. But, as confused as my poor rusty reviewer brain might be, I can't imagine this series going out any other way.

Bonuses: +1 An entertaining cast of aliens with (mostly) fun interspecies shenanigans; +1 Nails the "transit hotel that is trying really hard to be the best it can be" feeling; +1 balances the conflict of focusing on small scale stories involving intractable-at-that-level political problems

Penalties: -1 Despite the above bonus, I did want more for Speaker...

Reference: Chambers, Becky. The Galaxy and the Ground Within [Hodder & Staughton, 2021]