A story that juggles so much, so inventively, with impressive clarity. 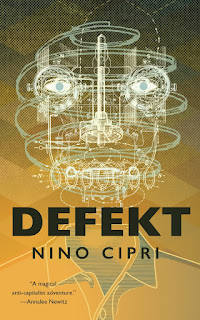 Defekt is the most enjoyably bubbly book I’ve read exploring the burden of shackles. Not literal shackles, but ones that can extend to life as a retail worker or a one of self-doubt. Those shackles siphon your time at the expense of empty praise from apathetic bosses, or it hamstrings the growth of your relationships. But Defekt shows that being unshackled and free is a possibility and is only deceptively difficult. With just a prompt and some effort for self-growth, you can see that you are your biggest enemy, and once you understand that, you become your biggest friend. And what makes this novella most impressive is that these themes aren’t explored in hallmark-card-cheesiness, but through an inventive, twisty story full of clones, animated objects, and wormholes, that’s always compelling.

Defekt is the sequel to Nino Cipri's Hugo-nominated novella Finna, but is accessible to those who haven't read its predecessor, as even though it takes place in a familiar setting, it follows completely different characters In Defekt, Derek is an employee at LitenVärld, always following his instructions to the letter, never letting his bosses down. But then Derek starts feeling off, taking his first sick day. As consequence, his boss sends him to work inventory at night. During that shift, he stumbles upon animated objects and four people who appear to be clones of him, tasked with dealing with the animated objects—defective products. Wormholes, romance, and heart-pounding action ensues.

Derek is a terrific character in his own right. His personality, despite its rigidity, doesn’t lend itself to a monotone, uninteresting voice, because his care for others in the story exudes heartwarming, upbeat warmth. Nino Cipri has made a really interesting choice by not making the clones exactly like Derek, but as their own distinct, fully-formed individuals. There are quirks and features that are synonymous amongst all of them, but their personalities are fluid, whether it be their gender identity or chunks of their worldview. This makes later romantic relationships between some of them un-creepy because Defekt makes it clear that these people aren’t the same at all—it’s way less like romancing themselves and more like romancing someone different who possesses certain qualities they enjoy.

Character identities aren’t the only thing that’s fluid—the writing is, too. Defekt struck the right balance of explaining enough to orient me in the world and characters, without overburdening the story in description. It’s on the longer side of a novella length and absolutely earns its word count, moving with pep, surprising reveals, and skillfully conceived weird humor. Even the beginning, which is largely absent of fantastical imagery and heart-pounding action is engaging because the oppressive but strangely amusing setting of LitenVärld is richly drawn and peppered with characters who act in ways that spotlight the stores rigidity and soul-sucking effect on its employees, imbuing the story with internal roiling and strife that still infuses it with energy. The energy always exists in the novella—just in different ways.

Capturing one life in a story is hard enough. But to capture many clones in a fleshed-out manner that highlight facets of the protagonist, while deviating into fully-formed individuals seems impossible, but Defekt does it. It’s a writerly feat that lends itself to the themes of being unshackled both in work and personally. Because not only does it tell its readers to think and act expansively, but its writing is aptly expansive, too, championing a well-trodden theme in a way that’s unique, and most importantly, grand.

Bonuses: +1 For finding moments of hilarity amidst all the plot threads.

POSTED BY: Sean Dowie - Screenwriter, editor, lover of all books that make him nod his head and say, "Neat!"