David Bowles is a Mexican American author and translator from south Texas. Among his many award-winning titles are Feathered Serpent, Dark Heart of Sky: Myths of Mexico; The Smoking Mirror; and They Call Me Güero. His work has been published in multiple anthologies, plus venues such as The New York Times, Strange Horizons, Apex Magazine, The Dark, Latin American Literature Today, School Library Journal, Rattle, Translation Review, and the Journal of Children’s Literature. Additionally, David has worked on several TV/film projects, including Victor and Valentino (Cartoon Network), the Moctezuma & Cortés miniseries (Amazon/Amblin) and Monsters and Mysteries in America (Discovery). Learn more at www.davidbowles.us and follow him on Twitter @DavidOBowles

Today he talks to me about his Six Books: 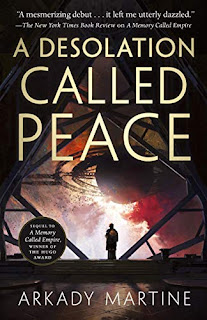 A Desolation Called Peace by Arkady Martine, the second in her Teixcalaan series. As a scholar of Nahuatl who has written a lot about pre-Columbian Mesoamerica, I really admired how Martine has done her homework for this series, mining Indigenous Mexican culture in such respectful ways to create a fully realized set of future cultures.
2. What upcoming book are you really excited about? 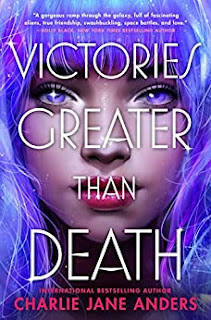 Victories Greater Than Death by Charlie Jane Anders, which launches her YA sci-fi series Unstoppable. Everyone is gushing that it’s frothy, fun, frenetic, and queer as can be. I’m ready! We need more YA space opera, especially penned by writers this talented.
3. Is there a book you’re currently itching to read again? 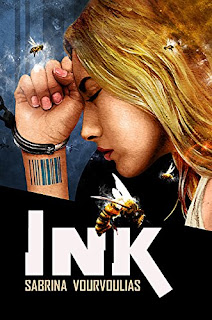 Ink by Sabrina Vourvoulias. It seemed chillingly prescient about near-future dystopic treatment of immigrants back when it first released in 2012. The past few years have often exceeded even what Vourvoulias predicted, but what I want to experience again is her lovely weaving of “magical realism” (i.e., just our regular realism in the Latinx community) with science fiction to depict culturally rooted answers to oppression.
4. How about a book you’ve changed your mind about – either positively or negatively? 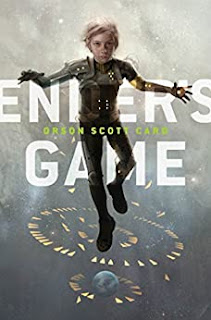 Ender’s Game by Orson Scott Card. I once really respected the book, even taught it (the cleaned-up version without Ender calling Alai the n-word, which I didn’t know about until years later) to middle-school students. But as OSC has grown more rabidly queermisic and white nationalist, I’ve come to see the eugenics and white saviorism of the book in a new light and can no longer stand it. The tension is interesting given that my BIPOC space opera The Path was written in dialogue with the original Ender Quartet.
5. What’s one book, which you read as a child or a young adult, that has had a lasting influence on your writing? 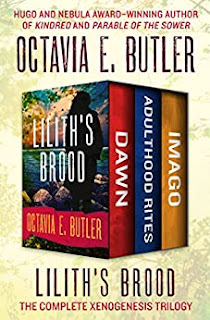 As a teen, I read Octavia Butler’s Xenogenesis series (now Lilith’s Brood), and it spoke to me viscerally. A light-skinned queer Chicano, I found my feelings of dissociation, cultural betrayal, self-colonization and ambivalence about white privilege stirred up by the trilogy in a way no other literature had to that point. Mexican Americans were hardly represented in US publishing at all, but the Black experience Butler drew upon was close enough to resonate deeply. Ever since, I have wanted to use science fiction to reflect on and comment about my people’s plight in what philosopher Gloria Anzaldúa termed “nepantla,” the liminal cultural space we find ourselves in. The specifics of that exploration lead me to write more broadly about the dangerous paradoxes of human nature, how we might transform ourselves and our institutions in order to move forward.
6. And speaking of that, what’s your latest book, and why is it awesome? 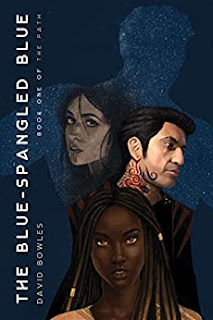 My latest is The Blue-Spangled Blue, the first book of The Path, a series I started writing twenty-five years ago. Set seven centuries from now, the book depicts humanity as having survived the White Doom—a series of cataclysmic events on Earth brought about by racist, capitalist hegemony. But as the global majority has spread into space, it’s found itself still shackled by corporate greed and the colonial mindset. Blue is set on the planet Jitsu, settled by ethnic Aknawajin from our asteroid belt who later won their independence from the world’s corporate owners. It’s here that a pivotal moment in human history begins, the chance to find a new way forward that is rooted in Indigenous past, weaving into existence a future dreamed of by distant ancestors. The spark is the romance between Tenshi Koroma—architect and leader of a religious reform movement—and Brando D’Angelo, a linguist from Earth. The family they start together serves as the fulcrum as it finds its perilous way along what they call The Path.
Full of religious, linguistic, cultural and political speculation that should resonate for fans of Dune, The Hainish Cycle, and The Expanse, this book (and the entire quartet, releasing over the course of a single year) blends military sci-fi action with character-driven plotting, rich world-building, and strong BIPOC/queer representation. I think you’ll come away wanting more. Luckily, there’s more coming.
Thanks David!
---
POSTED BY: Paul Weimer. Ubiquitous in Shadow, but I’m just this guy, you know? @princejvstin